A Nice Little House With A White Picket Fence 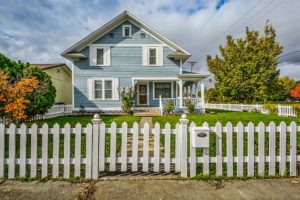 I was a senior, Sally was a freshman. We would hold hands and walk to the small lake on the other side of her family’s farm. The bank was angled, and we would lean back and stare at the distant sky and cloud formations. Sally (Name is changed but the story is real) was my high school sweetheart who I still hold fondly in my heart.

I was about to graduate from high school and leave home. We discussed, “What’s life really all about?” It was the first time I remember peering over the horizon, actually wondering about adulthood. I emphatically declared I want “A nice little house with a white picket fence”.

That was 60 years ago. Ten days after graduation I headed off to the Marine Corps. There was no money for college, might as well fulfill my military obligation.

I’m forever grateful to Sally. Every day in boot camp, over that long, hot summer, I got her letter with a return address HOLLAND. (Hope our love lasts and never dies) Like most young romances, about six months later we went our separate ways.

I didn’t see Sally again until I was 60 years old at a high school reunion. She is still the same wonderful person, married to another classmate who is a cool guy. They raised a nice family and are happy. As we hugged I thanked her for her wonderful letters to a young man who had just left home. I’m happy for her, she is a good person who deserves a good life.

Now the 80-year-old milestone is in front of me. I’m probably a silly romantic daydreaming about my childhood memories – and then sharing my thoughts.

My wife Jo and I just spent a month in a small town, Prescott, AZ. A couple times a week they have concerts in the Courthouse Square. We recently saw the Central Arizona Concert Band. I took this shot as they were setting up because it was still light. 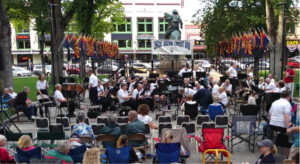 Soon a few jitney type buses arrived. Several seniors carrying lawn chairs joined the growing crowd. One elderly man caught my attention. His hands were gnarled, and he bent over as he walked. I leaned forward to read his cap. He was a WWII veteran.

As the sun was setting, the concert began with the Star-Spangled Banner. Everyone that could was standing. I glanced over and saw the WWII veteran singing. They were all singing. One little lady, holding on to her walker, was really belting it out – on key. I wiped away a tear. No one was kneeling, that’s for sure!

I looked around and asked Jo, “Where are the young people?” I had a similar reaction at a local car show. We walked through rows of vintage autos of our youth and the crowd was dominated with seniors. Fifty years from now, will there still be car shows? Will there still be concerts in the park?

As I listened to the music, I couldn’t help but daydream about small-town values. I thought about my boyhood dream – “A nice little house with a white picket fence.”

It hit me like a bolt; I sat up in the chair. I was surrounded by seniors. I’d bet that most all of them had childhood dreams and expectations, just like Sally and I did. Today, many decades later we look back and wonder what the heck happened!

It wasn’t the house and fence, but rather what it represented that I yearned for. My childhood wasn’t like the television show, Ozzie and Harriet. I came from a broken home, bounced around and when my mother remarried, I was sent away to a boarding school. At 18 I knew it was time for me to leave home.

I loved Sally’s family. I was included in family events. There was fun, love, laughter and it was what I thought a family was supposed to be. I longed for a loving family life, just like we saw on television.

At that same reunion, many of my high school classmates reconnected and got to know each other once again. What a shock it was to learn that the majority of my friends also had problems; abusive parents, alcohol issues, single parents, the list went on. Those who said they had a “wonderful childhood” were very much in the minority.

Despite the challenges, most felt we were lucky to have been raised with small-town values that helped us get through life. How many times have we told young people, we never locked our doors? We went out to play – the rules were “be home in time for dinner.” We felt safe and comfortable in our environment.

I was sad to read the Inside Edition report, Woman Says She Was Mom-Shamed for Letting 8-Year-Old Daughter Walk Dog Alone:

“Police took no action against the mother, but the state Department of Children and Family Services was notified and an investigation was opened to see if Widen was neglecting her children….”

Zerohedge reports, “Generational Disaster: Debt-Laden Millennials Set Back By $140,000 vs. Their Parents”:

Debts notwithstanding, Zerohedge also reports, “Millennials Expect To Retire At 56 Despite Negative Net Worth”:

“….despite the fact that a surprising number of millennials are fat and broke, many still have an optimistic view on when they expect to retire. … A TD Ameritrade survey found that millennials who use the service expect to retire at the surprisingly young age of 56. That’s six years below the current minimum age for receiving social security.

…. What’s even more surprising, of the 1,500 millennials surveyed for the study, 53% expect to become millionaires at some point in their lives.”

It’s good that the generation has not given up and is beginning to take saving seriously.

My boyhood dreams of a loving family and “A nice little house with a white picket fence” represented the traditional American Dream. A loving family, plus true financial and emotional freedom. Throwing off the shackles of debt slavery and accumulating wealth certainly makes life easier.

The simple part of the dream was being content with a comfortable, but not necessarily lavish lifestyle. Ozzie and Harriet were not rich, but they sure looked to be a happy family.

Friend and former colleague, David Galland wrote an interesting 37-page essay, “On Average”. David does some in-depth research on the economics of average and the “cost of life”.

Much of our current dilemma is caused by the political class. David doesn’t mince words:

“When push comes to shove, you can rest assured that the political class will do whatever it takes to avoid losing power. They can and will change the rules as needed, devalue a currency, renege on a debt, slap on tariffs, start a war to grab another nation’s wealth… literally whatever it takes to keep the wheels on.”

“In the end, it is hard to come to any conclusion other than that the average person is in trouble.

They may keep their head above water for a while longer, while the current economic mini-boom continues, but it can’t last.

That doesn’t mean the nation will devolve into some sort of dystopian nightmare.

As we can’t predict the future, … in the end we need to look after ourselves.” (Emphasis mine)

We can’t depend on the government doing the right thing. Social Security benefits will be reduced and will lose buying power with each passing month. Without major changes, health care costs will continue to skyrocket, while the quality of care declines.

All is not hopeless. Those who manage to get out of debt have plenty of options. People are not only downsizing but also relocating to more affordable and tax-friendly locations. Look at not only the income tax rates but also the property and sales taxes.

“…. If you live in a high tax state such as New York or California (or Vermont) you are throwing serious money down the government rat hole.

For example, if you live in a median household in San Francisco, you’ll spend 45.56% of your income on state, local and federal income taxes.

In sharp contrast, were you to slide your residence north, to Seattle, the total government take would drop to 23.80%. That’s a huge swing in how much you can save.”

Take charge of your life like you always have. Don’t expect any help from the government. If moving and downsizing can keep you financially comfortable get on with it, you are not getting any younger.

Find “A Nice Little House With A White Picket Fence”, that you can afford and enjoy the rest of your life! Small town America is still pretty comfortable.

I hope everyone enjoyed their Labor Day weekend. My oldest grandchild, Corrinne celebrated her birthday. I won’t tell you how old she is, but I will say she is eligible to be elected president.

Daughter Dawn and family joined in the celebration. Three generations, (7) went to the Cubs-Brewers baseball game on Labor Day. They are a “house divided” when it comes to the Cubs versus the Brewers.

James Earl Jones plays Terrence Mann in the movie “Field of Dreams”. His dialog about the game applies to many of us:

“The one constant through all the years, Ray, has been baseball.

America has rolled by like an army of steamrollers. It’s been erased like a blackboard, rebuilt, and erased again. But baseball has marked the time. 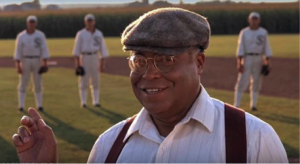 This field, this game – it’s a part of our past, Ray. It reminds us of all that once was good, and it could be again.”

Dawn sent me a text with photos, including my youngest great-grandson sitting on his mom’s lap eating a ballpark hot dog.

My grandmother took me to my first game. Six generations of (at least some) Cub fans. Maybe next year we can figure out how four generations can go together.

The Brewers won in the bottom of the 9th, which is unimportant. Two little boys will always remember going to the ballpark with grandma and grandpa. I hope they too take their grandchildren when the time comes.

Here are some cute baseball quotes: