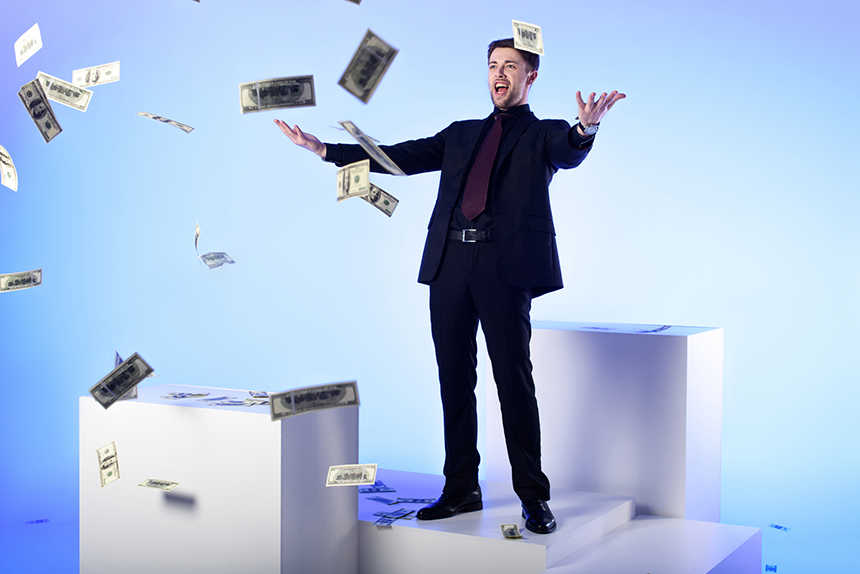 During my working career, I was fortunate to become close friends with many very successful people.

Tom (fictitious name) fit that mold. We had each other’s home phone numbers and talked regularly.

Tom was a high-level vice president of a major corporation and was the speaker at a banquet for our training class. He asked me to stay when the event was over; he wanted to tell me something.

We sat in a corner as the tables were being cleared. He smiled. They had a good year. At their annual meeting, the company president handed him an envelope with a $200,000 bonus. He thanked me for my help and looked forward to working with me in the upcoming year.

Wow! I thought, “it must be nice”, and was happy for him. I asked, “Maybe I should be asking for investment tips, where are you going to invest the money?” He paused, got a funny look on his face, and said, “Invest my ass, I’ll use the money to pay down debt.” I was shocked.

He told me he had three mortgages, leased four luxury cars, two kids in college, two still in high school, his wife had a $2,000/month personal budget, his daughter had two horses, they had raised his country club dues – the list went on and on. His monthly loan payments had to be astronomical.

By all outward appearances, he was very wealthy, had a great job, led a very high-end lifestyle, enjoyed all kinds of beautiful toys, great vacations, loving family; he had it made. Yet he was mortgaged to the hilt – living from paycheck to paycheck.

He felt like he was on a treadmill. He was in his early 50s, made good money, and had lots of stuff, but was terribly stressed out worrying about money.

I asked, “How old do you have to be, and how much money do you have to make to make the stress goes away?” He felt once he got his kids through college, he could start to save money. His 401k was woefully underfunded. He knew he would have to save a lot to maintain his current lifestyle when he retired. He said, “There are times I feel like I am racing to beat the heart attack.”

We talked well past midnight. I was depressed and scared.

I was a decade younger, is this what my future holds? I sought out mentors, wealthy successful people, asking for advice on how to accumulate wealth. I hated the stress of the debt treadmill.

One mentor asked, “What is wealth?” There were a lot of people like Tom who appeared to be very wealthy that might not be any better off financially than I was.

Webster defines wealth as “An abundance of valuable material possessions or resources.”

I hesitated. Having an abundance of stuff can create the illusion of wealth. I saw too many people with their abundance, low net worth, and mortgaged to the hilt. I decided to clarify MY definition:

WEALTH: “An abundance of valuable material possessions or resources that are owned without encumbrance.”

The 4 Types of Wealth

My immediate concern was financial wealth. Remember the old saying, “Live off the interest, but never touch the principal.” How do I accumulate enough money to be able to do that?

Financial wealth can lead to social wealth. Many wealthy people are philanthropic and highly regarded within society.

Time wealth is a result of financial wealth. When you are working you exchange time for money. When you retire you exchange money for time. Savings is a time bank. When working, you can’t consume all your income or you won’t have any in your time bank to draw from when you want to retire.

Physical wealth is tied with time wealth. Eating properly, exercising, and timely medical care are much like saving money, requiring time and discipline. Johnny Carson said, “Having money allows you to not have to worry about money.” Reducing that stress must be good for your health.

My grandfather said, “Pay yourself first and learn to live on the rest!” Not as easy as it sounds.

I received quarterly bonuses based on production. I decided to put a portion of each bonus into savings FIRST and use the rest for living expenses. I quickly learned a valuable lesson.

As our savings grew, I found myself getting the “itch” to buy something. Hey, we have the money to pay cash. Sure enough, we bought a brand new, huge, expensive TV, moving the old TV to the basement.

When I got my bank statement, I realized I’d made a terrible mistake. I traded retirement money for a TV we didn’t need. Why? For the first time in my life, I was able to pay cash for a major item. I allowed my emotions to get the best of me.

I thought about how I was brought up. We were a poor family. My parents never owned a car until I was 16. Buying a car was a very big deal.

My grandmother taught me about saving. As a youngster, she helped me open a savings account. I would “save up” for something I wanted. When I got enough money, I would proudly go buy it. That was how our elders lived, there were no credit cards, and you “saved up” for things you wanted to buy.

My elders lived through the depression and didn’t trust the stock market. What little they had was in their home equity and some small certificates of deposit. I never connected “save up” to mean anything long term like retirement.

My epiphany moment was a completely different philosophy. I vowed to pay off all my debt and never get into debt again. That required a real plan, living below our means, saving, and becoming debt free. Wealthy people don’t borrow money, they invest it where it earns them a good return.

I learned something about myself in the process as I worked through the plan. My revised saying:

“Pay yourself first and learn to live on the rest. If you must, hide the money from yourself so it is not easily accessible.”

I began paying extra house payments because I knew I couldn’t touch that money.

When I went into business for myself, I set up a special retirement account. Each month, the first check was deposited in that account – maxing it out from day one.

Successful retirement is having enough money to live a comfortable lifestyle, without constantly worrying about money.

FDR was wrong. Social Security isn’t going to cut it and falls woefully short for most people.

Unless you maxed out your 401k and invested well, it too is not a sure thing. Friends who retired with guaranteed government pensions also confide they built a good nest egg on top of their pension which allows them a comfortable lifestyle.

Theoretically, inflation is supposed to favor debtors, allowing them to repay debt with less valuable dollars. If you took out a $1,000/month home mortgage a decade ago, today the buying power has dropped 27.3%. The theory is your income will increase with the inflation rate and your $1,000/month is a smaller portion of your gross income. No guarantee there.

While your house payment may be easier to make, if you are financing other things like cars, toys, etc. their prices are going up, along with prices of everyday items like food, energy, medical costs, etc.

The theory has a major flaw! CNBC reports, “58% of Americans are living paycheck to paycheck after inflation spike – including 30% of those earning $250,000 or more.”

Bloomberg adds, “Headwinds for High earners Are About to Get Worse”:

“Considering $250,000 is almost four times the median US salary and puts you in the top 5% of earners, it’s pretty unnerving that so many say they are spending everything they make each month.

Many politicos want to forgive student loan debt. What good will it do? Politicians spending our tax dollars to buy votes.

“It’s even more disconcerting when you realize that most in that category haven’t had to make student loan payments for more than two years.”

Forgive the student loan debt and many will borrow to buy something else. The debt cycle will continue.

We have become a nation of “impulse buyers” (and politicians) spending money we don’t have while debt piles up. That has to stop!

Hard times are very stressful; particularly those living paycheck to paycheck. You never learn how to manage money until you don’t have any. Until the paycheck-to-paycheck crowd changes their mindset about wealth and debt, nothing will change.

I feel many of them will, hard times call for tough decisions. Like their great-grandparents, many will have their epiphany moment, get out of debt and be truly free for the duration.

To those in debt, beat the crowd, get started now. It won’t be long before some terrific (life-changing) investments will go on sale, and you want to be able to take advantage of that – and accumulate some real wealth…

Last week I mentioned the 4th of July and how the patriotic holidays impacted our generation.

I found the comments at the end to be very moving.

“Kids from all walks of life make it a priority to fill this hotel atrium with a riveting reminder that we are not a nation of soloists, but a chorus of shared values, that when joined together resonate like nothing the world has ever heard.”

Despite the crap we see in the mainstream media, I have traveled this country far and wide. Most of America is longing for the day when politicians quit trying to divide this country and we can live our lives in harmony.

I am free because I know that I alone am morally responsible for everything I do.” — Robert A. Heinlein

Long-time friend Toots sends along some “Contemplations of a senior citizen.”