When Advice Conflicts, Who Should You Listen To? 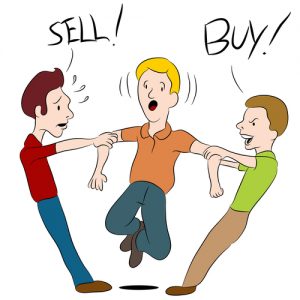 We moved to Texas in the early days of the dot-com boom. I reconnected with a boyhood friend Tom. He has an economics degree from an Ivy League school, became a successful stockbroker and economics consultant.

My broker would “suggest” I consider some of the hotshot dot-com stocks. Tom provided a good offset, suggesting caution.

Many of these companies were not making money. Those showing profits had extreme price/earnings ratios; their stock prices outrageously high. Tom warned that “eventually” the tech market would suffer a horrible crash.

Who should I believe, my life-long friend, a recognized expert, or my stockbroker? I cautiously limited my exposure to the tech sector and invested in other areas. While they did not provide astronomical gains like some tech stocks did, we did well.

I second-guessed myself constantly, wishing I had invested more. I’d calculate fantasy profits I would have made if I had enjoyed the frenzy; buying and selling at exactly the right moment.

Should I have paid more attention to my broker than Tom? He was “eventually” right, but a lot of people made billions while I sat on the sidelines waiting for the inevitable crash!

The Beat Goes On

How many of us wish we had bought Amazon a decade ago and held on? In August 2017 Yahoo Finance’s article, “Amazon Stock’s History: The Importance of Patience” tells us:

“Amazon.com has an impressive stock price history – perhaps one of the greatest over the past two decades. After accounting for three stock splits, Amazon’s shares have advanced from $1.50 in May 1997 to near $1,000 today – a 66,600% return!” 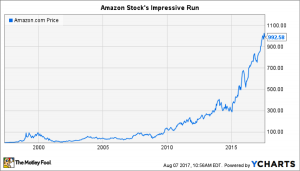 The price has risen another 10% and now sits above $1,100/share. Investor’s patience has been rewarded handsomely over the last decade.

Recognized expert, Bill Bonner, has a different perspective. His recent article, “The World’s Favorite Stock Is Doomed” describes the dilemma:

“Nearly 20 years ago, we described Amazon as the “River of No Returns.”

Since then, the stock has made investors rich, and we looked like a fool for two decades.

…. Amazon is now one of the most richly valued stocks in the whole world….

…. In other words, the business model is a failure.

The concern is more than Amazon; it’s the entire market. Some experts feel it is overvalued and is due for a major crash. Others feel there is still plenty of money to be made before a correction.

When stocks tanked in 2008, interest rates hit historic lows as the government created trillions of dollars out of thin air to bail out the banks. Historically, massive scale money printing leads to high inflation, which causes stocks to fall.

Many predicted another, inevitable crash. Some investors sat on the sideline, while others, desperate for yield, poured money into the stock market driving it to all-time highs.

A recent “Federal Reserve press release” paints a positive picture for what lies ahead:

“Information received since the Federal Open Market Committee met in September indicates that the labor market has continued to strengthen and that economic activity has been rising at a solid rate… Household spending has been expanding at a moderate rate, and growth in business fixed investment has picked up in recent quarters.

…. Consequently, the Committee continues to expect that, …economic activity will expand at a moderate pace, and labor market conditions will strengthen somewhat further.”

We discussed TINA (There Is No Alternative) – the idea that the market is currently high because investors, desperately seeking returns, are left with few alternatives. Matt is not alone when he tells us:

“Right now, we’re in the midst of a strong primary bull market. Economies around the world, including our own, are showing slow but sustainable growth, and this provides a great backdrop for stocks.

…. But that will change. Ultimately, our current situation will come to an end, and we’ll see the stock market top out on a longer-term basis.

“While there are always a host of concerns for bulls to worry about, right now the primary areas of weakness do not appear to be harbingers of an impending change in the primary trend. We’ll continue to monitor as conditions evolve, but right now investors should stay the course until further developments arise.”

Is the bubble about to burst? 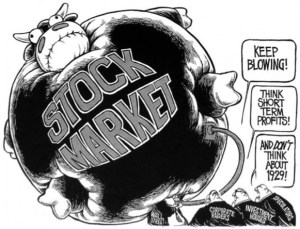 A recent CNBC article, reports, “Since the prior bear market ended in March 2009, this advance in equities is now the second-oldest on record without at least a 20 percent drop in the S&P 500.”

They offer a variety of opinions, but none predicting any imminent danger.

James Rickards, another well-respected voice writes, “The Hidden Danger The Bulls Are Missing”:

“Bull markets in stocks seem unstoppable right up until the moment they stop. Then comes a rapid crash-and-burn phase. (Emphasis mine)

Is there ever any warning that a collapse is about to happen?

Of course there is. …. The problem is that everyone ignores them!

…. This may be your last clear chance to lighten up on listed equity exposure before the bubble bursts.”

John Hussman’s Market comment, “This Time Is Different, But Not How Investors Imagine It Is Different”, tells us we are on thin ice but OK for now:

“…. The U.S. equity market is now at the most offensive level of overvaluation in history, exceeding even the levels observed in 1929 and 2000. …. Our very near-term outlook is rather neutral, allowing for both further speculation and abrupt market losses.

The most historically reliable valuation measures are obscene here. We expect the market to lose nearly two-thirds of its value by the completion of this cycle…. In my view, Wall Street is completely out of its gourd.” (All emphasis mine)

While a market crash is inevitable, is it imminent? I’m sure many investors who followed Mr. Bonner’s advice wish they had bought some Amazon along the way.

Like it or not, retirees, desperately seeking return must put money at risk to survive. What should they be doing?

Understand your personal situation. There is no “orderly market” when the inevitable “Crash and Burn” correction finally arrives. Monitor your investments and take profits where appropriate. Preservation of capital is high priority with retirement funds.

How do you know when it’s the real thing? Former Fed chairman Ben Bernanke spooked the market when he uttered the word “taper” and stocks tumbled. It took the Fed a month to calm the market.

What may appear to be a flash crash could turn into a major correction. You never know when an up/downtrend is over until later.

Don’t try to time the market? It’s foolhardy and expensive for individual investors to think they can beat the programmed traders. There are times it’s better to sell a year early than a day too late!

Patience is a good thing. Don’t allow the fear of losing out cause you to make a costly mistake. Many investors jumped in near the end of the dot-com boom and lost money. The market will “eventually” correct and good buying opportunities will come along.

Do what you think is right. When the plane hit the first tower on 9/11, people who thought and acted independently got the heck out of the other tower. They didn’t wait or need to be told what to do. Don’t expect any guidance from your brokerage firm; they will be too busy protecting their own holdings.

Don’t beat yourself up! Looking back, my frustration about not investing more during the dot-com boom was wasted energy. I was being cautious, lamenting fantasy profits, assuming I knew what to buy and timed the market perfectly. Don’t let those frustrations affect your judgment today.

…. And on Monday, the S&P 500 completed its longest streak ever without a 3% intraday drawdown.”

With all the conflicting opinions from market experts, the safest assumption is the market is on thin ice. The warning signs say, “Proceed with caution!” Don’t ignore them. 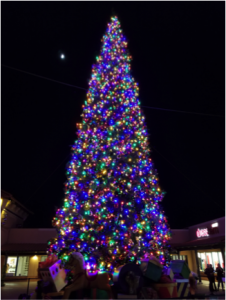 Christmas season is here in our part of the world. I want to thank readers for doing their Amazon shopping through our link. Our goal is to keep our weekly newsletter FREE.

When going through our link, your prices are the same, and your prime account works as always. Amazon gives us a small stipend which helps us out. Thank you, one and all, for your help.

Jo and I live in Anthem, AZ, a Del Webb community just north of Phoenix. They have a huge outlet mall which is pretty neat.

The mall Christmas tree is awesome! I’m told it is the largest natural tree in the United States. Jo took this shot with the moon in the background. The write up about where it is cut and how it is shipped to our little town is interesting.

The photo was taken in the early evening, and the temperature was in the low 70’s. Two families had blankets spread on the grass at the base of the tree enjoying a picnic dinner with some excited little children.

You can’t say people in rural America don’t have a sense of humor…. 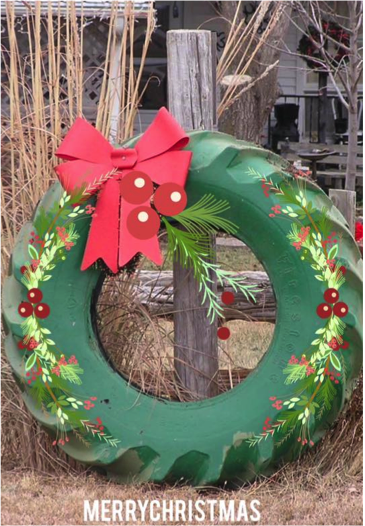