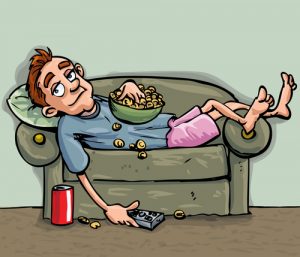 I love the line in the country song, “Mammas, Don’t Let Your Babies Grow Up To Be Cowboys”. …”Cause they’ll never stay home”.

Thousands recently graduated from high school and college. Despite the motivational commencement address about moving on to the next stage of life, many graduates will continue living at home for a decade or more. Young people are not emerging. Does America have a problem?

A recent Census Bureau Report led to some dramatic headlines:

Census: More Americans 18 to 34 Now Live With Parents Than With Spouse

The Census Bureau tells us:

Of young people living in their parents’ home, 1 in 4 are idle; …they neither go to school nor work. This figure represents about 2.2 million 25- to 34-year-olds.”

The Census Bureau defines adulthood as achieving four milestones; working, living independently, marriage and having children. Many survey participants disagreed with their definition:

The participant’s response correlates with Dr. Jeffery Jensen Arnett’s paper, “Emerging Adulthood”. He believes young people aged 18-25 are bridging the gap between childhood, adolescence and having not yet entered the enduring responsibilities that are normally associated with adulthood – calling it “Emerging Adulthood”.

In the 1970’s, Gail Sheehy wrote a great book; “Passages”, outlining what normally happens in each decade of life. She concluded that our society is getting younger, 80 is what 70 used to be, 60 is what 50 used to be, etc. Each chronological age is behaving as though they were younger than the generation before them.

The Census Bureau survey weighs in:

…In 1976, some 85 percent of women and 75 percent of men were married by the time they were 29 years old. To find at least that same proportion today, we have to look among people in their early 40s. …Young adults are not necessarily giving up on marriage. They are waiting longer.

This subject generated much discussion among my peer group of early baby boomers and retirees. Once we graduated from high school, we were expected to leave home, either heading off to college or joining the military. Those who were not college material started in the trades as apprentices and worked their way up the economic ladder.

While the academics use fancy terms, my grandfather’s simplicity still holds true. He taught me that all animals are responsible to bring their offspring to the point they can survive, (and hopefully thrive) on this planet – on their own. As a youngster, my mission was clearly understood; I was expected to grow to be self-sufficient. Family elders would not be there to look after me.

So what’s the good news?

The Census Bureau digs into the details:

“At 24.2 million people, the population of 18- to 34-year-olds living at home is a large and diverse group. …About 81 percent are either working or going to school.

The majority of the young people still living at home are making progress toward becoming self-sufficient; it’s just taking longer than it has in the past.

Of the 1 in 4 who are idle, over 25% are disabled and have some type of limitations. Their health plays an important role in their decision to live with parents.

What remains is approximately 1.6 million who are able to work and/or go to school but not doing so. They are described this way:

“They tend to be older millennials, white or black and have only a high school education, compared with their peers who are working or going to school while living at home. …They are more likely to have a child, so they may be caring for family…”

“Parenthood ranks low in young people’s views of the essential criteria for adulthood …but those who have had a child tend to view becoming a parent as the most important marker of the transition to adulthood for themselves.

Does parenthood cause young people to grow into adults? The census bureau tells us, “Nearly 40 percent of all births in the United States are to unmarried women.” They draw no conclusion on this subject.

A poorly educated, single parent living at home has very little opportunity for financial and emotional independence. During their early years, decisions they made affect the rest of their life; particularly if their partner does not accept parenting responsibility.

What does this mean for family elders?

The “Race to the Finish Line” has changed. Once the nest is empty, parents generally focus on their next phase of life – planning and funding retirement.

The generation that married in their early 20’s saw their children leaving the nest around the time they were 50. Many were in their peak earning years and could play “catch up” – racing to save as much as possible to be able to retire. There was a 10-15 year bridge to the retirement phase.

Parents of the 8.4 million children still living at home past age 25 have a bigger retirement planning challenge. Supporting your children for even a few more years can cut 1/3 or more off the bridge to the finish line – or cause parents to continue working longer. Those harboring the 1.6 million between ages 25-34 who are “idle” and not making progress, have even bigger challenges.

The millennial generation is taking longer to move through each cycle. Millennials will probably work well into their 70’s (or longer) to be able to retire.

Set expectations and glorify the goal early on. Francis Marion, (High Country Blog) wrote a terrific article, “The Things Men Do”. He discusses risk and responsibility and begins with a cool quote:

“There is only one basic human right, the right to do as you damn well please. And with it comes the only basic human duty, the duty to take the consequences. – P.J. O’Rourke”

The ability to be financially and emotionally independent applies to all, not just men. While the timeline may be different, the goal and expectations have not changed. Using some common sense (and avoiding pregnancy) seems to be working well for most young Americans.

I saved the best news for last.

Way to go cowgirls! I believe the best marriages are between adults who choose to be married, where neither is financially dependent on the other. The cowgirls are doing terrific! The Census Bureau has some significant points:

…More young people are working today and have a full-time job. The driving force has been the rise of young women in the labor force…

…A woman with a college degree is less likely to be married by the age of 25 than one with only a high school diploma. By the age of 35, …the college-educated woman has a greater chance of being married and staying married… A college-educated woman has a 78 percent chance of still being married by her twentieth anniversary. A woman with only a high school diploma has a 41 percent chance.”

Despite the bubble wrap and coddling, the system is still working – most young people are growing into responsible adults.

Parenting, grand-parenting (and great-grand parenting) are wonderful phases of life. The true joy comes from helping each generation grow to become independent, responsible adults; fulfilling their role in the natural order of things. Whether they grow up to be cowboys or cowgirls, help keep the line moving. When your judgment day comes, rest easy; you did your job!

700+ students at Jupiter High School received their diploma last week. The principal proudly announced a large percentage were going on to college. Godspeed and we wish them well.

Minimum wage increases are causing changes in the fast food industry. We saw our first kiosk in a McDonalds a few miles from the high school. I’m sure it is a sign of things to come.

McDonalds has the cleanest restrooms in America. During our five-day trip across country I conducted an unscientific survey. I observed more seniors working at McDonalds than young people.

The impact of raising the minimum wage is likely having a negative effect on seniors who are also trying to supplement their retirement.

Many took the opportunity to chat with customers and appeared to enjoy doing so. They appeared happy and we received a lot of good service with a smile. There are a lot of positives for seniors still being productive.

Being the oldest of the four generations at the graduation was a reminder that time waits for no one. Some time ago a friend sent me “rules for aging” which are easily saved with modern technology. A couple of them are appropriate – graduation season is a visible reminder for all that time marches on.

This one fit right in with this week’s article: