This Is Already A Great Christmas 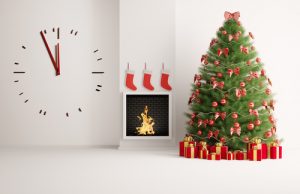 I almost gave up! I wanted to write something positive in my pre-Christmas column. Who wants to read about politics, terrorist incidents or the latest in the Federal Reserve saga at Christmas time? I sure don’t. I was considering a one-sentence column wishing everyone Merry Christmas and Happy Holidays (to be politically correct).

Getting ready for my morning shave, I took off my pajama top and peered into the bathroom mirror. I began shouting, “Oh my God, Oh my God!” My wife Jo came running in to see what was wrong. Choking back tears, combined with rapid fire babbling, I was not being clear. I finally pointed at the mirror and said, “Look, look!”

I had just painfully ripped the bandage off my eye that had cataract surgery the day before. I told Jo, “I’ve never seen that before.” “Seen what before?” she asked. I rubbed the side of my face and told her I had NEVER EVER seen the stubble on the side of my face before I shaved. I could see every single (grey) hair. In my younger years, if I went a day or so without shaving I would see a 5 o’clock shadow, but never the individual hair. It was shocking.

Following a quick shower I dressed and ran out into the front yard. The flowers were not big red globs; I could see the individual flowers and petals. Everything looked so bright and clear.

Quickly back into my office to discover, without glasses, I could read the computer screen clearly. I reduced the size of the type and could still read it. It hit me! I can see better than I have ever been able to my entire life.

I jumped up and went to the kitchen and was staring at Jo – her eyes, hair, and smile. I just stood there. “What?” she asked. I didn’t respond. “WHAT?” she asked again. All I could say was, “My God you’re beautiful!” After 30 years together, her smile is as beautiful as ever. She pooh-poohed my remarks; reminding me she is now on social security, no longer the young woman I married. “What difference does that make? I’m telling you how I feel,” I responded.

I’m as excited as a kid on Christmas morning.

I asked Jo to drive me to my morning follow up appointment. I wanted to look out the window. My head looked like it was on a swivel; I was jumping around like a puppy dog on the front seat.

We live at the base of Daisy Mountain. It’s not a big, grey glob of dirt; I could clearly see tall green cactus. The waterfall in our town park was crystal clear and amazingly beautiful. I could read the overhead street signs clearly without having to be right on top of them. I read the text on the gas pump without glasses. I can’t wait for our next road trip up in the mountains. Is it possible the red rocks in Sedona are even more beautiful than I thought?

We arrived at the doctor’s office. Dr. Charles Schaffer is a good guy, very businesslike, and has a good sense of humor. The day after my first eye surgery, although it was cloudy, I could make out the top line of the eye chart. He said it was 20/20.

He turned on the eye chart, covered one eye to see how the second eye was coming along. He asked me to read the top line. Screw that! It took some concentration but I read him the letters on the bottom line – much to his surprise. With both eyes, I could read it clearly. Dr. Schaffer confirmed what I already knew; without glasses my vision is better than it was wearing them before the surgery. I was seeing better than ever before – EVER!

I then opened up on him, telling him about the shaving revelation and the flowers in the yard, choking back tears. The nurse handed me a Kleenex, then took another to wipe her eyes. I continued to press on, excitedly talking about my observations on the ride to his office.

A cataract is a cloudy, protein-like substance that forms on the lens of your eye. The doctor makes an incision on the side of your eye and removes the milky material. The patient is given the option (not covered by Medicare) of having them insert a Toric lens inside the cavity. It’s basically a permanent contact lens.

He told me what happened. Dr. Schaffer reminded me that he used the machine in his office to measure the astigmatism as part of my pre-op visit. It was calculated at 3.0. When they remove the cataract, they have another machine they use during surgery to recheck the astigmatism. In my case it showed 1.5, which is what he used. He said, had he used a 3.0 lens, I would have been a very unhappy patient.

His comments confirmed our discussion of the previous morning. Our last conversation, before I was wheeled into surgery, was a bit different. I told him that his baby boomer generation and my retirement generation are lucky to be living in a country with free markets incentivizing innovation and technological improvements. While technology is developed in many countries, free market capitalism sure encourages the process. He looked at me quizzically. I explained what I meant.

Ten years ago I was barely able to function. I was diagnosed with sleep apnea. Had someone not invented a CPAP machine I would probably not be alive today. That machine helped me regain the energy and stamina to begin my encore writing career, giving me a new purpose in life.

As long as I am passing out thanks, an audiologist named Alicia Nance (who did not sell me my hearing aids) took a special interest and worked with the manufacturer to get my hearing aids adjusted correctly. My hearing now is better than it has been in decades.

Dr. Schaffer, using the new technology, has given me better vision than I have ever had, even as a teenager.

In the Marine Corps, even with glasses I was a terrible marksman. My vision was not correctible; I couldn’t see the target 500 yards downrange. Now, without glasses I am 20/20 in both eyes. I find that truly remarkable. Heading to the rifle range after Christmas has moved to the top of my bucket list.

We have much to be thankful for.

It’s hard to fathom what the next generation of technology will bring. Perfect vision and hearing from birth? Who knows? I’d bet someone is working on it.

As we left the doctor’s office, I thanked him for my wonderful Christmas present. He stopped and said, “Thank you for the feedback, you’ve made our Christmas more enjoyable.”

Next week we head to Indiana to spend Christmas with the youngest grandchildren. With my new vision, I imagine their huge tree will sparkle. I’m getting the Christmas spirit. I am excited, like a youngster counting down the days.

What a great reminder of what the holiday season is all about. Tune out the world. Focus on friends and family and count your blessings. Sometimes we have to stop the world and look around, and realize just how lucky we are.

We lost a true American Hero this week, John Glenn. Some of the pilots I served with in the Marine Corps flew with him; he was highly respected. One of his wingmen was baseball legend, Ted Williams.

Glenn was one of the original seven astronauts, and the first American to orbit the earth. As he was preparing for reentry to the earth’s atmosphere a warning light went on about his heat shield. They used a retrorocket to slow down the spacecraft and begin reentry. Instead of jettisoning the rocket, they changed plans and left it attached to help secure the heat shield. We were all nervous.

Glenn manually flew the spacecraft, Friendship 7. He had to get it exactly right or he would burn up in space. We were told to expect a long radio blackout. America breathlessly waited, what seemed like forever. We began to fear something went wrong, and then we heard a crackled radio message. We jumped up and down, hugging and cheering – he made it!

Friend and mentor, Olivier Garret interviewed me last week. Olivier was responsible for encouraging me to un-retire and begin my writing career. I am forever indebted to him. Olivier is the CEO of Hard Assets Alliance. Check them out; they do a great job.

Our next letter will be published between the holidays. Our final letter of the year normally takes several weeks to complete. I’m not alone when I say that I’ve been lucky to have many wonderful mentors along the way. I’ve been counseled many times to give back when it’s our turn. Year-end is a good time to reflect and share, whether it is a column or quiet moment with a grandchild over the holidays.

I’ve enjoyed many conversations with people from different cultures, learning how they celebrate the holiday season. The common thread seems to be feasting, family and fun.

This holiday humor is in line with our current times:

As a little girl climbed onto Santa’s lap, Santa asked the usual, “And what would you like for Christmas?”

The child stared at him open mouthed and horrified for a minute, then gasped: “Didn’t you get my E-mail?”

Merry Christmas and Happy Holidays. However you celebrate the holidays, may you be blessed with hugs, smiles and be filled with joy!