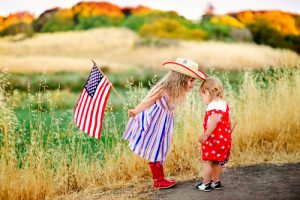 I’m grinning like a Jack in the box clown today. I haven’t felt this good in a long time. I’ll be doggone if I will let anything change my mood. When you are done reading, I’m hoping you feel the same way.

In 2016, I was bummed out. The negative political crap from the election left much of the country exhausted and frustrated. I was ready to turn the corner from the daily hysteria and melodrama in the media.

In 2017 things just got worse, by December I was exhausted, mentally worn out!

Television today is a constant barrage of hateful political rhetoric, senseless murders, sexual harassment, scandals, hypocrisy, corruption, illegal immigration, violent protests, disrespecting our flag, and outrageous statements by politicians promoting class warfare. How many times have you heard someone ask, “What the heck happened to the country we grew up in?” “What has America become?”

I want my pre-Christmas article to be positive, full of holiday spirit. In late November, I decided to stop watching TV news and limit the time I spend on some internet sites. I quickly noticed a drop in my blood pressure.

Next summer we’ve rented a home in Prescott, AZ. It’s a neat little town of approximately 40,000 people. Prescott is part of the old west, about an hour northwest, 5,000 feet up in the mountains. It’s around 22 degrees cooler than it is here in the valley. The center of activity is the Courthouse Square located on “Whiskey Row.” Put a visit on your bucket list…

I was on the treadmill when this 2016 YouTube video grabbed my attention. I excitedly headed for the family room and put it on the big TV to show Jo what I discovered. For over 60 years, the town has a Christmas Parade. In the evening, thousands gather to sing Christmas Carols as part of a ceremony lighting trees around the courthouse. I told Jo, I want to go do that!

We asked our friends, Phil and Joan, to join us. We were lucky, I snagged the last two available hotel rooms for Friday and Saturday nights.

We arrived Friday in time to go to the “Magical Valley of Lights of Fain Park” in Prescott Valley. It was an amazing display. The pickup truck in front of us had several kids in the bed. Jo asked,” Isn’t that illegal?” I responded, “farm kids don’t fall out, they know better.” When the drive was finished, dad pulled the truck off the road and the kids all piled inside.

Saturday morning, the hotel breakfast buffet was full of families decked out in Christmas clothes with excited children. The lady next to us told us attending the tree lighting was a family tradition, soon to be including a 4th generation.

We got to the square early and parked nearby. At a local restaurant, we were greeted with a smile and “Merry Christmas”. After lunch, we found a place to stand (next year we bring chairs). The guys held our spot and the girls spent about 30 minutes shopping, returning just before the parade started.

I was grinning from ear to ear as the local high school band followed the flag. Everyone was standing, hats were removed as the colors passed bye. 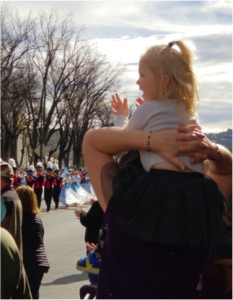 Then I saw it! I grabbed Jo’s arm and said, “please get some pictures of that, quick!” The little girl was sitting on her daddy’s shoulders excitedly clapping and cheering. Her siblings were clapping, jumping up and down.

I scanned the crowd. This little girl was one of hundreds of children acting like normal kids watching a parade. You could easily spot 3 generations of families enjoying shared experiences, making memories that will last forever. I said to Jo, “How cool would it be if the grandchildren were here with us.”

We missed the shot later when firemen drove smaller vehicles. One drove right over to us, leaned out the window and gave the little girl a “high five” and a “Merry Christmas!”

I was pleased to see the crowd was truly mixed. We saw several heritages, rich and poor and most everywhere in between. I suspect we saw some descendants of the original Yavapai Indian tribe. Prescott is their home and they are proud of it.

As floats came by, people waved and shouted, “Merry Christmas.” The crowd returned the greeting. I thought to myself, “How many Christmas parades have I attended as a child, father, grandfather and now great-grandfather with other generations of my family?” Close your eyes and listen and it’s hard to tell them apart.

I snapped out of my daydream when someone from behind said, “coming through!” I turned and saw a frail old cowboy and his wife, both elegantly dressed. His hands trembled as he held on to his walker/chair. Instantly the crowd parted and I helped them both step down off the curb. People moved them to the front so they could see the parade better. They said, “Merry Christmas” and “thank you” several times. 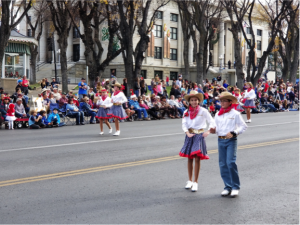 Prescott is truly a western town. Jo loved the Cloggers, all decked out in their western gear. They were really good and got a nice hand from the crowd.

In the background, you see the courthouse and on the left side, you see the gazebo where they have band concerts and many summer weddings. In a few short hours, the entire area will be illuminated with over 500,000 lights.

We had a few hours between the end of the parade and lighting ceremony. Locals told us it was unseasonably warm, and that was great. Knowing we didn’t want to stand much longer, we found a large park bench by the courtyard. With some help, we dragged it over so we could get a good view of the evening presentation and decided to enjoy the pleasant fall air and sunshine.

In front of us were several families with chairs and blankets spread on the lawn. One couple we spoke with had 13 family members; it’s an annual event. We had a blast watching the toddlers and young children all having fun.

Several people came up to us and said, “Merry Christmas” and we got a great feel for those who attend. We met folks from Phoenix, Mesa and as far away as Tucson. As the clock ticked closer to the 6:00 PM kickoff, the crowd really grew. We were told that it was double the size of 2016 (weather probably helped). I estimated 10,000+, fully surrounding the courthouse.

One 3-generation family arrived with a metal wagon chock-full of goodies. It contained a crockpot full of hot chili, cheese, chips, sour cream and utensils to feed their family. As the sun disappeared, we were bundled up and the “grandma” came and asked us if we would like some hot chili or hot coffee. Had I not made a “hot dog run” about an hour before we would have taken her up on the offer.

At 5:30 a choir walked out and sang Christmas carols. At 6:00 the mayor appeared and asked all children in the crowd to join him on the courthouse steps. There were several hundred children. The singing of the Christmas Carols began and everyone, children, moms, dads, and grandparents joined in.

I wore my cowboy hat, dropped my head and closed my eyes listening to the singing. My mind drifted.

I remembered as a young child, hearing the doorbell ring. My grandmother opened the door and there were people outside serenading us with Christmas carols. My grandmother made fresh cookies and hot cocoa and my job was to distribute it to the singers. They finished, thanked us, said “Merry Christmas”, and moved on through the neighborhood.

A few years later I was doing the same thing, singing carols as part of our church youth group.

Jo, thinking I was asleep, nudged me and asked, “Are you OK?” “I’m fine, I was just enjoying the music,”, I replied. 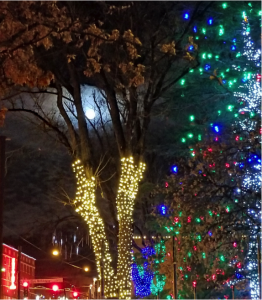 I looked up at the Christmas tree, soon to be ablaze with color, and was fascinated because the full moon had risen. I could see it clearly between the branches.

I jumped when a young girl screamed. I realized someone flipped the switch and the entire square was ablaze with color. Jo exclaimed, “Oh My God!”

The tree lights hid the moon so we waited for the crowd to thin out and moved to the side before taking this photo.

Someone put together a terrific 2:20 YouTube video of the lights in 2015, with nice background music.

I didn’t want to leave. We stopped in a coffee shop full of families all decked out in their Christmas clothing. I probably said, “Merry Christmas” more last weekend than I have in the last five years.

The America many of us remember as children is still there. The weekend was a terrific jolt of reality, away from the constant melodrama we see on television. Small town America still has real values, family, love, and respect for others. I wanted to share our experience hoping it would bring a smile to many of our readers. 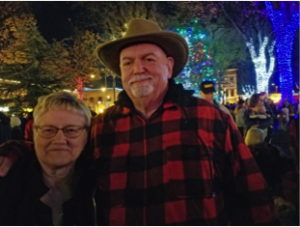 Jo and I want to wish everyone a wonderful Merry Christmas. If you don’t celebrate, we hope you have a wonderful holiday season surrounded by loving families making wonderful memories all generations will cherish forever.

May your love and smile last well into the New Year…

Prescott is called “Arizona’s Christmas City”. We plan to go back for dinner before we head to Indiana for the holidays, just to soak in some more Christmas spirit.

We will not publish an article next week. Jo and I are flying to Indiana to spend Christmas with daughter Holly, her husband Casey and grandson’s Brock & Braidyn. It’s always a fun-filled, busy event. Jo and Holly work elbow to elbow for several days, preparing to feed a dozen or more family members.

Each year the children get older, as do the grandparents. Dozens of photos are taken but it’s what’s in our hearts that counts.

Look for our next article between Christmas and New Year. It’s always one of my favorites. I try to use it as an opportunity to mentor the younger generation. This year’s edition is special because a younger family member is making a great contribution.

We hope everyone has a wonderful holiday season filled with lots of hugs, smiles and fond memories.

I know many will be traveling – be safe. Don’t let anything spoil your mood! 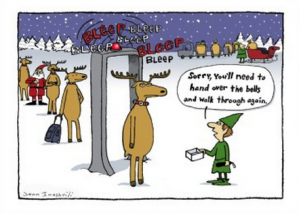