Are Your Fingernails Blue? 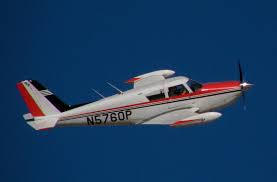 On a hot summer day, I was flying my single-engine Piper Comanche from Schaumburg, IL to Indianapolis, IN. I decided to fly higher than ever before (9000 feet). With the tailwind, I touched 200 mph. The sky was crystal clear; I could see across Lake Michigan. I felt like I was in the stratosphere and could see forever! It was euphoric!

Uh Oh! Euphoria signals danger for a pilot; it’s a symptom of hypoxia. Sure enough, my fingernails were dark blue. Hypoxia is – “a deficiency in the amount of oxygen reaching the tissues.” Hypoxia has caused pilots to fall asleep and crash. Can I hang on for a bit, the tailwind is really moving me along?

Not worth the risk – I pushed the nose down and rapidly descended. When I landed my fingernails still showed some blue.

“I’m only going to say this once … This is all headed for a Minsky moment. … A Minsky Moment is when a market fails or falls into crisis after an extended period of market speculation or unsustainable growth.

… a Minsky Moment happens when everyone is complacent … thinks nothing bad could happen, so they get overconfident and decide to take on more risk.”

Bloomberg reports, “Signs of Euphoria Are So High Investors Are Having a Hard Time Imagining a Decline”:

“The New Year isn’t even two weeks old, and already $2.1 trillion has been added to the market capitalization of global equities. The market is verging on such overbought levels that not even reliably bullish analysts can keep up with the new highs.

“Now, we have seen a total reversal with people having a hard time even imagining how the market could decline,” (emphasis mine) they wrote in a report dated Monday. “We must admit the speed and relentlessness of the move is a bit troubling.”

I’ve heard this stuff before

Right after the first bank bailout, I asked the late Glen Kirsch, “When the government creates billions out of thin air, doesn’t that lead to high inflation?” Glen was emphatic that high inflation is always the result. He encouraged me to buy gold and move some assets offshore denominating them in foreign currencies.

He recommended some investment newsletters. They reinforced my belief, urging readers to diversify, buy gold, inflation is coming – protect yourself.

Over the next nine years government debt skyrocketed, (the Fed monetized over $4 trillion), the stock market hit historic levels, while interest rates and inflation stayed low. During that time we’ve been bombarded with warnings (and scary statistics) that what appears inevitable, is looming imminently on the horizon.

Pater Tenebrarum recently wrote “The Mother of All Blow-Offs”:

“When positioning and sentiment reach levels that were never seen before … it may well be that it means something for once.

…. We recall that … the Daily Sentiment Index of S&P futures traders stood at just 3% bulls on the day of the March 2009 low. Looking at sentiment data today, there are probably 3% bears left.”

What about the pending meltdown?

For almost a decade we’ve anticipated the Minsky Moment, yet somehow the Federal Reserve has managed to magically levitate the markets.

One would think that doubling the government debt, and the Fed flooding the system with money to bail out the banks would lead to high inflation and the inevitable stock and bond market crash – but it hasn’t – yet. Why not?

“Congress created a coercive system that allows the US Treasury to expand the currency without practical limit – so long as public confidence in the system is maintained.” (Emphasis mine)

When confidence is lost in an individual currency, investors trade into other currencies. Hyperinflation is when they dump it at all costs.

When the Fed flooded the banking system they were lowering the value of the dollar. The Bank of Japan and the European Central Bank (fearing a cheap dollar would hurt exports and having problems with their own banking systems) also followed suit.

In 2017 I wrote about market rigging in the metals market, quoting an article written by Peter Warburton in 2001 outlining the relationship between central banks and investment banks rigging the metals market price:

“… (Central Banks) incite investment banks and other willing parties to bet against a rise in the prices of gold, oil, base metals, soft commodities or anything else that might be deemed an indicator of inherent value.

Their objective is to deprive the independent observer of any reliable benchmark against which to measure the eroding value, not only of the US dollar but of all fiat currencies. Equally, they seek to deny the investor the opportunity to hedge against the fragility of the financial system by switching into a freely traded market for non-financial assets.”

Eight major players are blatantly manipulating the price of all precious metals; making billions from their illegal activity. So far, despite a preponderance of evidence presented by the Gold Anti-Trust Action Committee (GATA), the government takes no action.”

The Fed has reversed course, now what?

“[W]hen it is time for us to sell, or even to stop buying, … there is every reason to expect a strong response.

…. I think we are actually at a point of encouraging risk-taking, and that should give us pause. Investors really do understand now that we will be there to prevent serious losses. It is not that it is easy for them to make money but that they have every incentive to take more risk, and they are doing so. Meanwhile, we look like we are blowing a fixed-income duration bubble right across the credit spectrum that will result in big losses when rates come up down the road. (Emphasis mine) You can almost say that is our strategy.”

Well, we’re now there – the Fed has committed to unloading over $4 trillion in government debt.

David Stockman explains the global magnitude with world banks in his article, “Washington’s Bloated Big Engine That Can’t – Why the Shutdown Threat Matters”.

Stockman contends that the US, European Central Bank, The Bank of Japan, and possibly The Bank of China will be flooding the market with bonds. Quantitative Easing (QE) by world banks has reversed to Quantitative Tightening (QT). Here are some highlights:

“…. (T)he $100 trillion global fixed income securities market is about to clear based on real money savings, not central bank fiat.

This will soon become known as the Great Bond Market Reset, and that development will knock the stuffing out of equity and risk asset markets….

…. (T)he central banking branch and the US Treasury – are about to dump $1.8 trillion of debt on the global bond markets. And we are quite sure that the law of supply and demand has not been repealed. (Implying a rapid rise in interest rates)

What they aren’t projecting, of course, is the huge headwinds to earnings growth implicit in the aforementioned collision of the Fed’s unprecedented QT program and the massive $1.2 trillion borrowing requirement of the Treasury next year.

…. What’s different this time, of course, is that there will be no rapid monetary reflation or other bailout from Washington.”

Chuck also warns, “…. This time will be different” … I just cringe when I hear those words!” He adds that the Saudis and Russia have also cut back, who’s left to buy our debt?

The Central Banks flooded the world with unprecedented debt, pumping the stock and bond markets to stratospheric levels. It’s not just a US problem.

Could we still have a near-term melt up? Sure. Could the recent tax cuts help the US economy grow, preventing a major crash? I wouldn’t bet the farm on that one. Ten-year Treasury yields have doubled since July 2016 and the bulk of the bond selling has yet to begin.

The stock and bond markets are in the stratosphere, it’s not the time to allow euphoria to lull us to sleep. As Chuck Butler warned, hold assets that protect against inflation, keep your stop losses current and wait – good buying opportunities will present themselves. 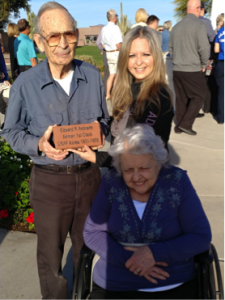 Last Thursday, dear friends Stew and Sammy W. invited us to a ceremony at the Anthem Veteran’s Memorial. The ceremony was large, probably 25 veterans being honored.

Families can honor their veterans by purchasing a paver, which becomes a permanent part of the memorial. The family got together and bought one for Sammy’s dad, a Korean War Veteran.

It was quite an emotional experience. As her father kneeled to be photographed with his paver, her mom was crying, along with many others. A couple of elderly veterans made it a point to walk over and gently pat her mom on the back – nothing needed to be said.

I was moved by several who attended. One paver appeared to be placed by a young widow, with a photo of a serviceman and his dog at her side. Families came together with many hugs and tears, creating memories that will last forever.

Every time I go to an event like this I realize how lucky I was. I was too young for Korea and honorably discharged before Vietnam got going. I go to honor those who were not so lucky.

If you are remotely interested, I encourage readers to put a trip to the memorial on your bucket list. It’s becoming world famous. Each year on Veteran’s Day we have a ceremony and the crowds keep getting larger.

My stepfather was a WWII veteran. His favorite book was cartoons drawn by Bill Mauldin – about his fictional WWII characters Willie & Joe. Here is one of my favorites: 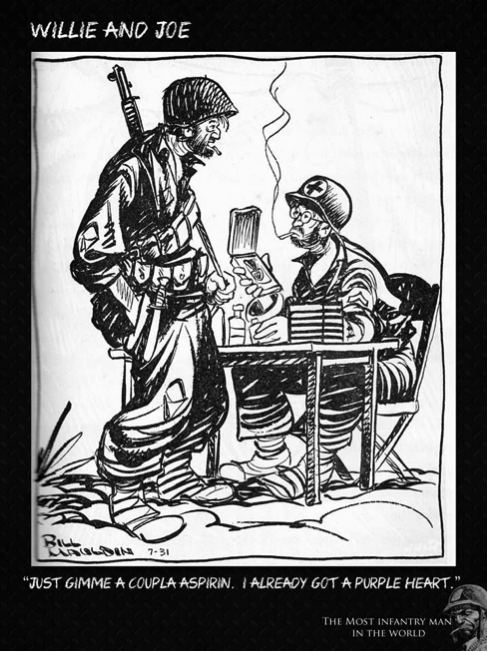 We owe a lot to those who served our country!