Are your nuts really protected? 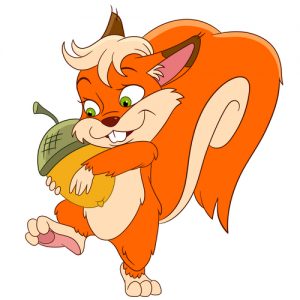 Remember going with your parents to the bank to open up your own savings account, in your own name? It was neat! What were you trying to accomplish?

Maslow’s hierarchy of needs is a great tool for understanding investing. The base of all human needs is survival. Each and every day we need food and water to survive. Without that, nothing else matters.

I had a client that was an unusual employment agency – day labor. Around 4:00 AM they would make huge pots of coffee, buy donuts and open their doors on West Madison Street in Chicago. Homeless people would straggle in, stand in line, get their free meal and board a bus going to various locations to work for the day. At the end of the day, they got paid.

I asked my client why they got paid by the day. He said, “If they don’t get paid they probably don’t eat.”

The second step in Maslow’s pyramid is “Security”; survival for tomorrow. Much like the squirrel that buries nuts in the ground to have food for the winter, man is the greatest storer of nuts in the animal kingdom. Humans generally do not need to hunt for food on a daily basis.

Squirrels hide their nuts to keep them from predators. As seen on the National Geographic Channel, animals hunt for food, make the kill, and then they will have to fend off other animals that try to steal it away.

One of the challenges the day labor force had was hiding from teen-age gangs who would watch them leave the day labor office and then rob them of their money.

Saving is taking the fruits of our labor and storing them to provide survival for our family for many tomorrows. We still must protect our nuts from predators who want to steal from us. Investing is planting nuts, hoping to multiply our efforts, so our accumulated wealth will grow even more. While our methods are more sophisticated, the underlying concept has not changed since the beginning of time.

As our society progressed people did not want to constantly have to guard their accumulated storage of wealth. Along came banks. They said, “we have these vaults and we can store it safely for you”. Oh really!

A new group of thieves

It did not take long before the bankers became the thieves. Realizing all of their customers would never withdraw all of their money at the same time, they began to lend it to others. Many people lost their life savings when the banks went broke.

Uncle Sam jumped in like Mighty Mouse and saved the day, creating the Federal Deposit Insurance Corporation. If the bank gets robbed or goes bankrupt Uncle Sam will insure your nuts up to $250,000.

Today Uncle Sam is the biggest predator, stealing the fruits of our labor to distribute to others who will vote to keep them in power. Governments demand you pay up or you go to jail, (unless you are politically connected of course). It’s like the big bully saying to first graders, “Did you bring your lunch money? Good-give it to me!”

Individual investors have learned to work around the government, using what they have left to accumulate their own survival nest egg. As long as the government does not get too greedy, society will not revolt.

The system is in trouble. Governments everywhere siphon income from the working class. To stay in power the political class always ups the freebies. Today they offer free food, medical, housing, cell phones and Lord knows what else. On top of that they now provide pension plans and social security for workers – the gold standard in nut storage. Wow, free nuts for everyone for life!

Today’s politicos have a problem. Stealing from the current income of the working class is no longer sufficient to pay the bills. They have over promised and can’t deliver. They have to find ways to steal more.

Unlike nuts, money does not grow on trees – unless you are a government. Not having enough through taxation to keep all their promises, governments can create money out of thin air. By creating additional currency units, they devalue the buying power of every other unit in circulation. This is called inflation, a form of stealth taxation. Inflationdata.com provides a great inflation calculator. If you bought a new car for $25,000 in 1970, that same car would cost $53,092.78 in 1980. People complain about the price of the car going up, however it is the value of the currency unit going down.

Governments go to great length to steal through inflation. In 2008 Argentina nationalized private pension plans stealing the investments in everyone’s pension plan, and replacing it with government IOU’s. Argentina had double-digit inflation and the buying power of many working people’s nest egg was reduced to almost nothing.

Don’t think it cannot happen in the US. With many private pension plans failing there has been discussion among the political class about requiring private pensions and 401 (k) plans to invest in government IOU’s creating the illusion of safety.

In Greece, the government was faced with huge debt payments to the European Union. Greek citizens, fearing desperate measures, were getting money out of the country and the government had to stop the outflow. The government temporarily shut down the banks. When they reopened, they limited withdrawals to approximately $67/day, and banned all money transfers via credit or debit cards to accounts in foreign countries. Once the capital controls are instituted, those who are caught in the web are screwed.

Even that is not enough. The Times reports (link firewall protected) the government is proposing the idea prying open the safety deposit boxes of suspected tax cheats.

“Under the unprecedented measure, tax inspectors will be allowed to open bank boxes and confiscate as much as half of the cash they find. Stocks, bonds, jewelry and even works of art will be confiscated in their entirety.”

70% of the Greek population is reportedly in favor of the idea. My guess is a “suspected tax cheat” is anyone with a safety deposit box. “The great protector” is the thief who is stealing the nuts today.

What should you do?

Don’t procrastinate! Once the currency window is shut it is too late. If you use a bank to pay your bills, keep as little in it as possible, and invest your money elsewhere.

Keep nothing in your safety deposit box that you would not be willing to show to a government official who may pry it open it even if you are not there. Safety deposit boxes inside a bank create the illusion of safety.

What other options are available?

There are many ways to diversify your cash out of the US dollar. Everbank offers FDIC insured Certificates of Deposit denominated in foreign currencies.

Some people are comfortable moving money out of a bank into a money market fund with their stockbroker. Others use brokers in other countries. It is perfectly legal as long as you comply with the reporting regulations. That is an absolute must and is not hard to do.

When it comes to storing valuables you keep in a safety deposit box, each person’s situation is different. If you choose to take on additional risk and store things at home, be sure to check with your homeowners insurance. Expect an increase in premium.

Some prefer to store precious metals in private storage vaults throughout the world. You will pay a monthly fee. Be sure to pick a good, safe facility.

I have friends who have opened up bank and brokerage accounts in Canada – with accompanying safety deposit boxes. Unless you live close to the border, having access to the safety deposit box may present a challenge – but could be a lifesaver in an emergency.

Investigate private vaults. For those who have a bit more, that is an option to look in to.

Don’t overreact; however understand the government and banks are no longer our protectors.

Legendary bank robber Willie Sutton was asked by FBI agents, “Why do you rob banks, Willie?” Sutton replied dryly, “Because that’s where the money is.” Desperate governments have shown they are not much different from Willie.

Just like the squirrel, you work hard and want to save the fruits of your labor to survive in the future. Make sure you store your nuts where they are safe, well hidden and not all in one place.

The Pension Benefit Guaranty Corporation is a government agency that looks after private pensions for over 41 million people. Good friend, Phil C. retired from an airline that went bankrupt and the PBGC manages their plan.

He sent me a link to an interesting tool. The PBGC notes, “Across the country, more than 38,000 people haven’t claimed pension benefits they’re owed. Unclaimed pensions equal a total of over $200 million, with individual benefits ranging from a few dollars to almost a million dollars.”

Phil typed in the company he worked for and recognized several names. In two cases, widows of former co-workers were unaware of any benefits. They filed and the claims were paid. He suggests that, “If you know anyone who may possibly have pensions administered by the PBGC, that you send them the link.

This week I want to do something a little different. Last week we took the family to see Grand Canyon. It was a cold, damp and rainy day. My wife Jo took a very unusual photograph; a rainbow inside the canyon. Within a matter of minutes, the entire canyon was engulfed in the fog and you could not see the other side. 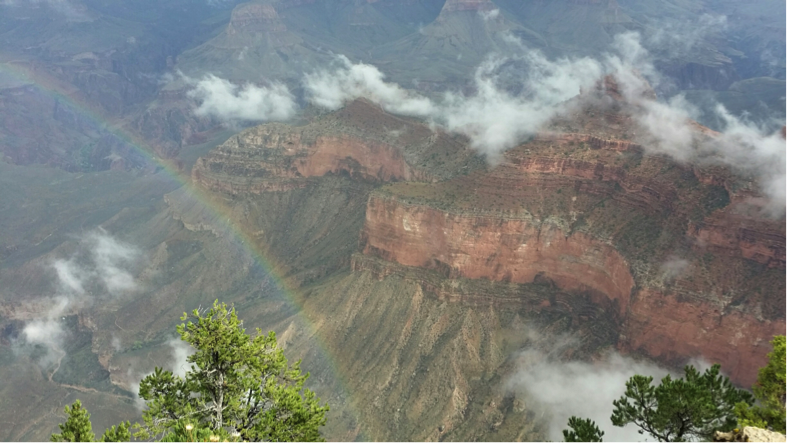