The Bank Was Saved And The People Were Ruined – Part II 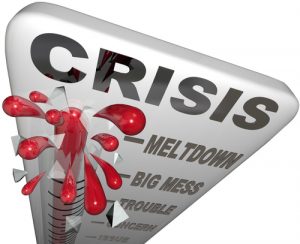 Despite Federal Reserve Chair Janet Yellen’s expression of confidence in raising the federal funds rates, the worst of the tragic consequences of the government bank bailouts is yet to come. Part II of “The People Were Ruined” is on the horizon, and “the people” are going to suffer dramatically.

William Gouge (1796-1863) was credited with the famous quote. His premise is still alive and well. Banks create boom and bust cycles through irresponsible lending. When “bust” comes along it is a surprise and a crisis. Everyone suffers except the political class and banks.

Why? The banks make enormous profits on the upside. When they suffer losses, not only do the taxpayers end up bailing out the banking system, the collateral damage can also be dramatic. The banks are saved and the people suffer.

Every day I see articles like, “Drained pension fund has retired New York union workers pinching pennies to survive, as doom looms for reserves across US”.

It’s a sad story about hard working union truckers (Local 707) relying on pensions; only to have their benefits cut. Thomas Nyhan, executive director of the Central States Pension Fund weighs in:

“This is a quiet crisis, but it’s very real. There are currently 200 other plans on track for insolvency – that’s going to affect anywhere from 1.5 to 2 million people. The prognosis is bleak minus some new legislative help. (Emphasis mine)

And it’s not just private-sector industries that are suffering; municipal and state plans are the next to go down – that’s a pension tsunami that’s coming. In many states, those defined benefit plans are seriously underfunded – and at the end of the day, math trumps the statutes.”

Could this be another example of pension mismanagement? While that may be a factor, are they all mismanaged? I don’t think so! A decade ago no one projected historically low interest rates. The bank bailouts with their low interest rates have negatively affected all pension plans.

The Pension Benefit Guaranty Corporation (PBGC) is a US Government Agency. Here are some highlights from their Mission Statement:

“PBGC is not funded by general tax revenues. PBGC collects insurance premiums from employers that sponsor insured pension plans, earns money from investments and receives funds from pension plans it takes over.

…PBGC was created by the Employee Retirement Income Security Act of 1974 to encourage the continuation and maintenance of private-sector defined benefit pension plans, provide timely and uninterrupted payment of pension benefits, and keep pension insurance premiums at a minimum.”

The NY Daily News reports Local 707 is one of 71 penniless union pension funds that rely on the PBGC for support. It’s the tip of the iceberg.

“The percentage of workers in the private sector whose only retirement account is a defined benefit pension plan is now 4%, down from 60% in the early 1980s.

Meanwhile, the few employers that still offer traditional pensions – typically industries with a strong union presence, … have been working overtime to cut deals to either reduce or eliminate their plans.”

How do you keep the plans solvent?

Solvency depends on three issues, contributions, investment earnings and benefits. If a plan cannot meet its obligations, adjustments must be made.

When the major airlines went bankrupt, their pensions were turned over to the PBGC and employees took benefit cuts. Congress approved a plan to allow the PBGC to cut benefits for unions plans, which they administer.

Why doesn’t the PBGC make the necessary adjustments? Politics is the answer, nothing new here. The Washington Post tells us the PBGC applied to the Treasury Department to reduce benefits for 300,000 truckers covered by the Central States Pension Fund. The plan was rejected and continues on the path to insolvency.

“(T)he PBGC published a report showing that its multi-employer plan program faces a 43% likelihood of insolvency within 10 years … Furthermore, that likelihood rises to 93% within 20 years…”

It’s not just the private sector unions that are in trouble. A Brookings Institute study tells us about the public sector:

“As of 2014, state and local governments sponsored nearly 4,000 pension plans that covered almost 20 million retirees, employees, and former employees who have not yet claimed benefits.

… Many states and municipalities are struggling to fund defined benefit pension plans for their employees. … (I)n order to improve their pension status, almost every state implemented some combination of lower benefit accruals and higher employer or employee contributions.”

Debating about mismanagement is a waste of time. Had “normal” interest rates prevailed over the last decade, many of these plans would probably still be solvent.

The Bail Out, Fall Out Continues

Part I – Working people without pensions have already seen their 401(k) and retirement plans go up in smoke. No actuary had to tell them their retirement projections were not being met. Millions of Baby Boomers have been forced to adjust their lifestyle because the government decided to bail out the banks at their expense.

Part II – PBGC and state and local pensions combined totals 60 million retirees. Part I caused individuals without pensions to have to make adjustments for their own retirement.

The negative affects of the bank bailouts are rapidly escalating. Retirees expecting their promised benefits rightfully claim they upheld their part of the bargain. As pension funds continue to dry up, the scream for bailouts will be deafening!

The ultimate solution may then be a taxpayer bailout. If that occurs, it could be a bailout of astronomical proportions, with the extent of the cost to taxpayers unable to be determined for decades … This may soon be a nightmare that becomes a reality.”

“…(M)embers of the plan say they hope lawmakers will support alternative legislation that could improve the fund in a way that is less painful to retirees.”

Karen Friedman, executive vice president of the Pension Rights Center adds, “We are thrilled that retirees now can sleep knowing that their pensions are not going to be cut, … this is going to put pressure on Congress to come up with that solution.”

When the “crisis” is upon us, “the people” will be told we have an “emergency”, much like the banking crisis. We must do something immediately or thousands of innocent people will be hurt.

It was actually Winston Churchill who first said, “Never let a good crisis go to waste!” This is a dream come true for some politicos.

Spending other people’s money for political gain is probably the world’s second oldest profession. Politicians and prostitutes are both referred to with the same slang terminology.

Part II is going to cost trillions of dollars and bring about social upheaval. The collapsing pension system is likely to bring class warfare like we have never seen before.

1. Hunker down and protect your own retirement nest egg. Those involved with the bank bailouts treated seniors and savers as “collateral damage”. Social Security is another government promise that is likely to be broken. Like it or not, you are on your own, don’t count on anyone, any government or union to keep their retirement promises. No one is looking out for you!

I disagree with Karen Friedman from the Pension Rights Center who said, “Retirees can now sleep better.” The longer the problem is ignored, the more draconian the solution becomes. “We the people” don’t want to bail you out! Get your current plans back on their feet now. Fix your own problems.

3. Insist on representative government. Those who favor congressional term limits believe that would solve a lot of our nation’s problem. Many senior members of congress have become politically beholden to their donors and forgotten “We the People”, hire them to represent our best interests in congress.

The never-ending cycle of crisis, emergency and government to the rescue game has to stop. The only way it will stop is if the “people” make it so – that is our responsibility.

When it comes to your retirement, you pay for yours and I’ll pay for mine – as it should be.

Last week we went to see the Arizona Diamondbacks play against the Giants with our Indiana fiends, Steve and Chris.

I’m becoming a fan of the new domed stadiums with retractable roofs. In Chicago, many times we drove an hour or so to Wrigley Field, paid to park, sat in the rain for a couple hours and then the game was called and made up at a later date. It’s nice to know the game will be played and you can watch in comfort.

If you visit our area, check out the stadium with the swimming pool in the outfield! It’s pretty neat!

I appreciated the suggestion subscriber Hal B. sent last week.

Here is a thought…

I just clicked on your Amazon link and clicked to make it a “Favorite” in my Internet Browser. That way when I want to go to Amazon to buy something, which is frequently, I will be using your link. It makes it quick and easy.

You may want to mention making your Amazon link a “Favorite” so your readers automatically are using your link each time they go to Amazon.

I really appreciate your newsletter. Thank you.

Thanks again to all our readers who are using our link to shop at Amazon. The small commission we receive helps us keep our website FREE.

Good friend Jeff W. completes his “great truths”. This time it is about growing old:

Jo loved this one: