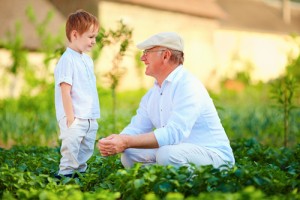 As a young lad, my off school summer months were spent on my grandparent’s dairy farm. The education I received about life each summer was probably more valuable than sitting in a classroom. Television had not been invented, and there were no neighbor kids to play with. My grandparents were my entertainers and educators 24/7. They did their job well.

I was recently reminded of one of their lessons.

Ben Bernanke wrote an article in the Wall Street Journal titled, “How the Fed Saved the Economy”, with the byline “Full employment without inflation is in sight. The central bank did its’ job. What about everyone else?”

It was obviously written to promote his new book, “The Courage to Act: A memoir of a Crisis and it’s Aftermath.”

In Mr. Bernanke’s own words:

“For the first time in nearly a decade, the Federal Reserve is considering raising its target interest rate…. that action will be an important milestone in the unwinding of extraordinary monetary policies, adopted during my tenure as Fed chairman, to help the economy recover from a historic financial crisis.

….It is encouraging to see that the U.S. economy is approaching full employment with low inflation, the goals for which the Fed has been striving.”

In fairness, he does couch his remarks saying there is still a way to go to reach utopia – but the implication is clear. The world was on the brink of disaster and the “courageous” bearded wonder swept in like Mighty Mouse to save the day.

My grandfather would not be impressed. On cool nights, my job was to bring in the wood for the pot-bellied stove. The old wooden chair by the stove served as my classroom.

In an attempt to impress my grandfather I told him of my great, courageous exploits of the day’s tree climbing. He encouraged me to talk and I embellished the story pretty well. Once again he nailed me with a very simple lesson.

“When you brag to impress others about your accomplishments, the harder you try, they more suspicious they become – you look like a phony. If you are really good, you don’t have to brag to others, instead others will tell the world just how good you are; then you remain humble.”

As I read Mr. Bernanke’s article, I became suspicious. Just what magic did he accomplish with his great “courage to act”? Bernanke informs us the two goals of the Fed are to keep inflation around 2% and bring the unemployment down to a reasonable level. He then gives himself an “A” for accomplishment.

“How has monetary policy scored on these two criteria? Reasonable people can disagree on whether the economy is at full employment. The 5.1% headline unemployment rate would suggest that the labor market is close to normal. Other indicators-the relatively low labor-force participation rate, the apparent lack of wage pressures, for example-indicate that there is some distance left to go.

But there is no doubt that the jobs situation is today far healthier than it was a few years ago. That improvement (as measured by the unemployment rate) has been quicker than expected by most economists, both inside and outside the Fed.”

“No doubt the jobs situation is far healthier”, he says! My grandfather was right. Mr. Bernanke’s premise is as phony as a $3 bill.

The Bureau of Labor Statistics (BLS) reports the U-6 unemployment rate is 10%. That is the BLS’ broadest unemployment measure, including short-term discouraged and other marginally attached workers, as well as those forced to work part-time because they cannot find full-time employment. Americans know Happy Days are NOT here again.

In 2009 the number of people receiving food stamps was just over 33 million. For the last 38 straight months, the number has exceeded 46 million people, an increase of 37.5%. If the “labor market is back to normal” why are so many more people depending on the government for food?

The Federal Reserve policies have affected most every American negatively. Baby boomers and retirees are feeling the effects of your Zero Interest Rate Policy. Public Agency Retirement Services recently reported,

“Public pension funds from California to New York are cutting investment-return predictions to their lowest levels since the 1980s, a shift that portends greater hardships for employees and cash-strapped governments as Americans age.

New upheavals in global markets and a sustained period of low interest rates (emphasis mine) are forcing officials who manage retirements for nearly 20 million U.S. beneficiaries to abandon a long-held belief that stocks, bonds and other holdings would earn 8% each year, as well as expectations that those gains would fund hundreds of billions of dollars in liabilities.

More than two-thirds of state retirement systems have trimmed assumptions since 2008 as the financial crisis and an uneven U.S. recovery knocked many below their long-term goals….The average target of 7.68% is the lowest since at least 1989.”

Every annuity, public and private pension plan has been adversely affected by your “courageous decision”. Several states are following the lead of Michigan and Illinois, looking for ways to break their pension promises to their employees. Baby boomers and retirees are feeling the effects of your Zero Interest Rate Policy.

Renowned economist Dr. Lacy Hunt of Hoisington Investment Management Company reports in their 3rd quarter 2015 review, “The evidence is clear that ZIRP and QE have been ineffective and a net negative for economic growth”.

The bearded wonder has instituted policies that have taken us backwards. He reminds me more of the blustering cartoon character Foghorn Leghorn than Mighty Mouse. He can crow all he wants about his great courage and success, but he cannot change the facts and rewrite history. As my grandfather taught me, if he were really good he would not have to be telling us, we would be thanking him.

Bottom line is Mr. Bernanke, and his successor, Janet Yellen are making things worse. Americans will be successful, not because of your actions, but rather in spite of all the damage done by the Federal Reserve.

My daughter Dawn, husband Gary and grandson Justin arrived on Saturday for a visit. We plan on celebrating Justin’s 30th birthday. One of the great joys in life has been to watch him grow into being a wonderful, loving, responsible adult. We are all proud of him.

Daughter Dawn emailed “we will probably be watching some baseball next week”. Yes indeed! The Cubs won their series against the St. Louis Cardinals to advance to the next round and play the New York Mets. That is the first time in history the Cubs have won a post-season series in Wrigley Field. The last time they played in the World Series I was five years old. We are keeping our fingers crossed.

We are not letting baseball get in our way. We have planned several trips including a visit to Grand Canyon (and some cool weather), and Sedona.

A subscriber from India sent me something interesting when I celebrated my 75th birthday.

“We have a big celebration here in India when a person completes 75…. In India we also celebrate once a person turns 81, as then that person would have enjoyed 1000 full moon nights!”

Justin will have enjoyed 370 full moon nights. Next one is scheduled for October 27th so we will be close.