Dennis is still tending to his health and hopes to be back writing very soon. Here’s another article I felt was relevant and worthy of a re-read. This article was originally posted on March 14, 2019.

While politicos like to call tax cuts “trickle-down economics”, the real culprit is socialism. The Robin Hood theory of “steal from the rich and give to the poor” sounds noble however, in practice it doesn’t work that way. The political class tax and spend for their benefit first, then some may trickle-down to the masses.

Margaret Thatcher sums up the problem well. Citizens gladly take government benefits as long as someone else pays for them, while politicians of all flavors are happy to oblige.

With each election, creative politicos invent new and creative ways to grow and maintain their power spending our tax dollars.

If tax revenues can’t cover the costs, the government raises taxes and/or borrows money to make up the difference. Unlike the federal government, individual states can’t print money. Is there a breaking point on how much they spend, borrow and tax?

How bad is it?

Three high population states, NY, IL and CA all rank in the top 10 in total tax burden levied on their citizens to pay for enormous give away programs.

“The Empire State leads the nation in “hidden debt,” according to a new report….

New York’s ledgers bear some $69.7 billion in unfunded liabilities, mainly pensions and health benefits contractually promised to state workers…. Such obligations, which states did not have to divulge…belie claims of balanced budgets and…limit borrowing capacity for future infrastructure projects.

The massive dollar figure is in addition to $40.9 billion in debt that New York did disclose in its 2017 financial report.”

“He told his state’s citizens that income tax revenues were coming in $2.3 billion below the expectations of just a month ago. ‘That’s as serious as a heart attack.”

In fiscal year 2020 New York plans to spend around $176 billion, with an estimated $100 billion coming from federal funds.

Illinois pension problems have been well documented. This Illinoispolicy.org headline grabbed my attention: (my emphasis)

Six-figure pensioners enrolled in those systems contributed an average of $160,100 toward their own retirements over the course of their careers and retired on average at age 59.

…. The state’s officially-reported pension debt sits at $130 billion, while Moody’s Investors Service lists the state’s unfunded pension liability at $250 billion. ….leaving taxpayers on the hook for massive debts. They have also caused routine calls for tax hikes at the state level.”

The Teachers Retirement System is the largest group in $100,000 club with nearly 12,000 pensioners.

“…. CalPERS is the largest public pension fund in the U.S. The $311 billion California Public Employees’ Retirement System…reduced its assumed investment rate of return to 7% from 7.5%. Given the fund’s 10-year annualized return of 5.1%, however, even this return assumption might prove overly optimistic.”

This 2016 LA Times offers updates, “CalPERS is underfunded and unrealistic. Can it save itself?”:

“The CalPERS board of governors finally voted to lower the fund’s projected rate of return – but only to 6.5% per year. …. Realities may make even a 6.5% rate of return too optimistic.”

Who is to blame?

The state employees lived up to their end of the bargain. Can’t blame them.

During the 90’s boom, states received record amounts of taxes. Instead of using the windfall to pay down debt, they squandered the money, including more expensive future promises. Past lawmakers bear great responsibility for the states pension problems today.

While some pension plans were adequately funded, things changed in 2008 when the federal government bailed out the banks driving interest rates to historic lows.

States were slow to react, continuing with unrealistic funding projections.

Citizens are moving out 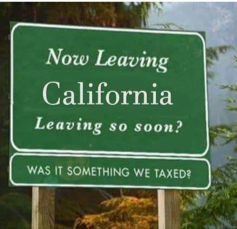 Our article, “If Socialism Is So Good, Why Are People Moving Away?” outlines the exodus from the three high tax states.

Citizens see the states scrambling, raising taxes and the cost of government services to cover the costs of political promises made to government employees – not for the benefit of ordinary workers.

Many seniors are voting with their feet, hoping to see their nest egg last in less expensive areas of the country.

I was recently asked, “Why are these states promoting sanctuary cities and illegal immigration? They are recruiting people who want to live off the welfare system while putting citizens at risk by harboring criminals.

Wouldn’t they be better off reducing welfare and encouraging workers and companies to move there?”

“Critics say that adding the question on citizenship would undermine the accuracy of the census because both legal and unauthorized immigrants might refuse to fill out the forms. By one government estimate, about 6.5 million people might decide not to participate.”

Breitbart explains why the socialist states are battling the question:

“Democrats understand that the revised 2010 U.S. Census questionnaire, which did not ask about interviewee’s citizenship under the penalty of perjury, encouraged many of California’s approximately 2.35 million illegal aliens and 1.65 million legal aliens to participate improperly in the U.S. Census.

It’s all about grabbing “Other people’s money” while maintaining a permanent government dependent underclass.

The New York Times (NYT) article, “A Census Question That Could Change How Power Is Divided in America” outlines the battle:

“‘Is this person a citizen?’ The answer could mean less representation for populous states and big cities.

The question could generate the data necessary to redefine how political power is apportioned in America.”

The census determines each state’s membership in the House of Representatives, their electoral votes and allocation of federal tax dollars.

The high tax states are doing all they can to grab as much federal money as possible – even if it means spending more welfare dollars and putting their citizens at personal risk.

The NYT article tells us,

“If 15 percent of noncitizens went uncounted, that would be enough to cost California and New York one congressional seat each, to the benefit of Colorado and Montana.

…. (If) we can remove all noncitizens from state population totals and reapportion Congress, a more drastic move that would require a constitutional amendment. ….this would cost California four seats.”

Will the bankrupt states have enough political power to require the rest of America to bail out their lavish government pension plans?

If so, expect the reckless process to continue at the expense of the middle class.

My wife Jo and oldest son were headed out and I asked her to buy a lottery ticket. My son raised his eyebrows. I said, “I’m willing to spend a couple dollars. If we ever won, several generations of our family would be set for life”. He thought for a second and said, “Yeah, if they move out of the country!”

Boy, I hope it never comes to that….

A personal note. I prefer to avoid political issues, however – when I see the political class, regardless of party, moving the country in the direction where our life savings and standard of living are the target, I feel I must warn my readers. I hope you all understand. Thank you. 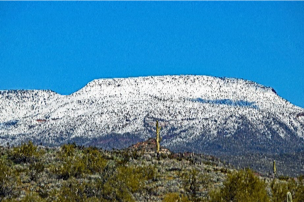 A couple of weeks ago I reported about cold weather and snow in AZ. Right after the snowfall, we found several photographers shooting the snow-capped mountains.

I shot these two in our local community. There is a majestic, tall cactus in the center of the first photo that is hard to spot. I wish the snow came down a bit further to create some contrast. 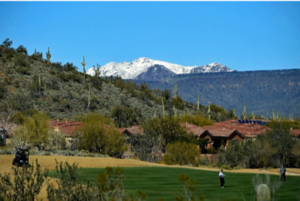 When we went to a Cub game, we diverted to Fountain Hills to check out the four peaks, a local mountain landmark. They were beautiful with their mountain tops covered with white snow. A couple of days later we returned, with camera in hand, and did not take a shot. Enough snow had melted to the point it was not pretty. Two days later all snow was gone.

Our oldest son Dean came for a visit and went to Tucson for a week of bike training. One day they biked to the top of Mount Lemmon. It peaks at 9,159 feet. He reported the weather in Tucson was warm. He flew back to Portland, ME and was greeted with lots of snow and cold weather.

This is the time of the year when I take my lunch break on the lounge chair in the back yard. Locals enjoy the spring, knowing 100-degree-plus weather is right around the corner.

Friend Courtenay W. supplies us with some interesting questions: