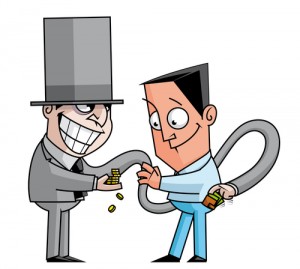 What happens when a retiree can’t pay his bills? The tragic photo of the Greek pensioner in the Express Tribune still haunts me. What a horrible feeling it must be to work hard your entire life, save your money, play by the rules, and then have your retirement hopes and dreams pulled right out from under you.

Could Americans end up in the same situation?

In 2008, the government passed the TARP (Troubled Asset Relief Program) bailing out the insolvent banking system. It was supposed to be a one-time event resulting in a quick recovery leading to a booming economy. It didn’t happen and has spiraled out of control. The Federal Reserve instituted several Quantitative Easing (QE) measures resulting in what is now labeled ZIRP (Zero Interest Rate Policy).

“The result has been devastating for retirees counting on safe, fixed returns, says Michael Rubin”, founder of Total Candor, a financial planning education firm based in Portsmouth, New Hampshire. “They’re earning a lot less on their savings than any other time in recent history.”

It can get much worse

Many countries are now punishing savers with negative interest rates – meaning savers pay the bank for holding their money. Imagine having a $1,000 Certificate of Deposit and a year later it is worth $950, minus inflation losses.

“Here’s an interesting table of numbers…showing the bond yields of most European countries, plus Japan and the U.S. Only through the magic of money printing and bond purchases by the (European Central Bank) ECB can a bankrupt country like Italy sport a 1-year bond with a negative yield.”

Think it can’t happen in the United States? Think again!

Immediately after reading Ed’s comments, I opened up my other daily reading must – The Daily Pfennig written by Chuck Butler. He shared some scary quotes from Mauldin Economics:

Federal Reserve Vice-Chairman Stanley Fischer said, “there is no plan to use negative rates in the United States, though the matter is under study.” Uh oh! Why is it under study?

The central bankers of the world appear to be pressuring the Fed to “get with the program”. Reuters headlines. “IMF report urges G20 to prepare global economic stimulus plan.”

“The Group of 20 nations must plan now for a coordinated stimulus program to keep a slowing global economy from stalling….The report was prepared for senior G20 officials who are meeting in Shanghai later this week amid falling equity markets, volatile currencies and signs of economic weakness throughout the world.

They propose “a coordinated stimulus program”? Isn’t that how you define collusion? Central bankers are to banking what OPEC is to the oil industry – a cartel working together for their benefit.

What could happen next?

If savers are punished for putting their money in the bank, then cash under the mattress is looking better every day. Bankers don’t like that idea.

In order to siphon wealth from the public, central bankers must drive as much wealth as possible into the banking system. I’m seeing a lot of articles recently about a cashless society, or making it more difficult to pay your bills with cash.

Here is one example.

MarketWatch recently quoted Lawrence Summers, a former economic adviser to President Obama and ex-treasury secretary: “Get rid of the $100 bill. Heck, maybe get rid of the $50 bill, too.”

His justification? “It’s easier for criminals and terrorists to move lots of cash illicitly in large bills. A million dollars in €500 (euros) bills weighs just 2.2 pounds…. The same amount of money in $20 U.S. bills weighs 50 pounds.”

Well bankers can fix that! It’s no coincidence we are also seeing articles like this Bloomberg view, “Bring on the Cashless Future”. They paint such a rosy picture:

Now isn’t that just dandy? There are 300 million law-abiding citizens in the US quite content to use cash. Why treat all as though they are terrorists and drug dealers? Give up your right to financial privacy and have all your money in the bank so they can charge you for holding it. Don’t they realize they will put the tooth fairy out of business?

When I opened up my first bank account they gave me a free toaster. A cashless society is their new version. The public is going to be the toast, and will get burned. Watch out! It’s their version of a Trojan horse.

We should learn from our European friends. When banks start paying negative interest rates, then limit or eliminate cash, it is generally the sign of a desperate government about to take desperate action.

Not only can they easily tax and confiscate your wealth through negative interest rates, they can also limit your withdrawals. The Greek pensioner I referenced had enough money; the bank, and government would not allow them to pay their bills with bank cards and daily withdrawals were capped at 120 Euros.

In Cyprus, the government instituted an emergency tax and confiscated money from people’s bank accounts. The Guardian proclaims, “The Cyprus Eurozone bailout conditions are bank robbery pure and simple.” The banks closed, did not allow withdrawals and confiscated money from depositor’s accounts to pay for government debt. This action set off shock waves all over the world – could we be next?

I am not making any predictions as to what will or even might happen. My intention is to outline a potential problem that I hope never comes to pass. You have to connect the dots and judge for yourself. No one knows for sure what the future holds.

There are two questions that must be addressed:

2. If so, what can we do to protect ourselves?

If you have the slightest concern, take heed.

On the political side, just say no to the idea of a cashless society! Make sure your elected representatives know how you feel.

You have the option to use cash, credit cards, debit cards and even your cell phone – and it works just fine. Let’s face it! If cash is eliminated, the drug cartels will find a way to work around it and people will find another medium of exchange.

Focus on what we can control – our nest egg.

1. Diversify your currency holdings. A prudent investor would not put their entire life savings into one stock, one currency or country. One good option – Everbank offers FDIC insured Certificate of Deposits denominated in foreign currencies.

2. Limit the amount in a single bank. In layman’s terms, the Cyprus government sold the emergency tax as a tax on the rich increasing the rate for those with larger accounts. Make sure all bank account balances are under FDIC insurance limits.

3. Tighten up your core holdings. Core holdings are insurance against catastrophe. You hope you never have to use them. Gold should be part of those holdings.

4. Own some junk silver. If cash was eliminated, a barter system will likely come into play. Junk silver is used silver coins, a recognizable value, and portable. They would be excellent for barter. You can buy them here from our friends at Gold/Silver.com in bags as small as $100 face value. Junk silver is a must for anyone concerned about any type of black swan event.

The Greek situation was not a Greek tragedy for all. Some saw the handwriting on the wall and were proactive, taking the easy steps to protect themselves.

I asked a Jewish mother about chicken soup being a cure all – “Does it really help?”

She grinned and said, “What’s it hurt!”

When it comes to your life savings, better safe than sorry.

Jo and I are newbies when it comes to Arizona. We quickly learned to use our cell phone cameras and recently bought a high quality camera. We are constantly in awe of the majestic natural beauty.

Last week Jo was on the 303 and saw seven hot air balloons. By the time she pulled over and took this photo several had completed their descent. 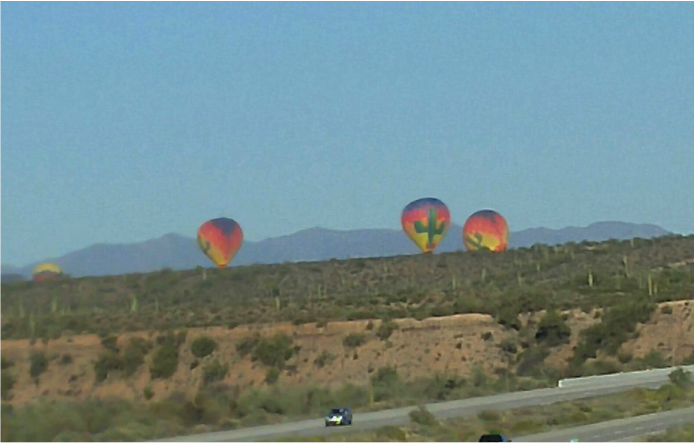 Soon our youngest daughter Holly and family will be visiting. Grand Canyon, Sedona, Butterfly World and a Cub spring training game are on the agenda. Keep the camera batteries charged up!

Locals tell us we will never tire of the natural beauty.

I’m reminded of the last stanza of the famous poem “Trees” written by Joyce Kilmer and first published in 1914.

“Poems are made by fools like me,
But only God can make a tree.”

As you drive down the main drag in many American cities, Ogden Nash’s version may be more appropriate:

“I think that I shall never see
a billboard lovely as a tree.
Perhaps unless the billboards fall,
I’ll never see a tree at all.”

And the old proverb really applies to us in the Arizona desert:

“Do not cut down the tree that gives you shade.”