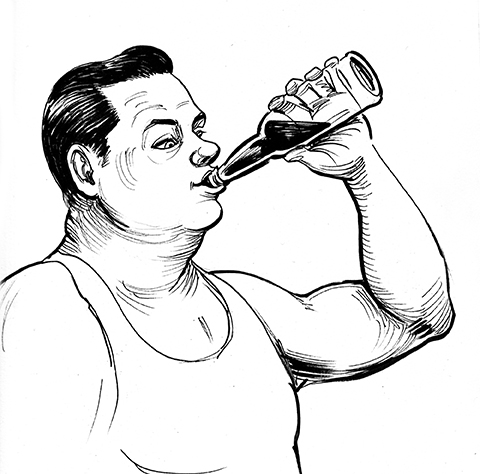 Many of Bob’s regulars became unemployed alcoholics, arriving early and drinking late. Unemployed, with little money, they nursed their drinks for hours chatting with their buddies. Bob needed more help to work longer hours and needed revenue to pay for it.

While Bob preferred his customers use credit cards, many didn’t have one or had reached their credit limit. He devised a plan for customers to “drink now and pay later.” Customers ran a tab, creating a loan, with the promise to pay later.

By extending customers’ credit, no one complained when he regularly raised prices for shots, beer, and wine. His cute waitress would ask, “Time for another round?” Customers smiled and responded, “Sure, why not?”

While Bob saw a huge jump in profit, he had a cash flow problem. He asked his bank for a large increase in his credit line, using his accounts receivable as collateral.

Bob’s accountant, noting increased profits, suggested Bob use part of the bank payments to regularly give himself a nice bonus.

His bank is a branch of one of the top bank/investment companies in the country. At their corporate headquarters, expert traders recognized a way to earn big money.

They packaged these customer loans into BOOZE BONDS, coerced the rating agency into a AA (investment grade) rating, creating the illusion of safety. They packaged them with similar bonds into fee-based mutual funds. These “securities” were actively promoted to investment clients, insurance companies, pension funds and traded on international securities markets.

Investors don’t really understand the securities being sold to them. AA-rated BOOZE BOND funds were truly Alcoholics Anonymous – debts of unemployed alcoholics – and their trusted brokers never bothered to check.

Interest rates continued down as the Federal Reserve, (owned by these casino banks) continued to flood the system with low-cost money (Quantitative Easing). Bond prices rose, Bob and the casino banks were making a lot of money.

As Bob was only making interest payments, his credit line was increasing rapidly, backed by more IOUs from his unemployed, alcoholic customers. A high-level bank risk manager took note and summoned Bob to his office.

He told Bob he is uncomfortable raising his credit limit higher, and he is raising interest rates. Bob pleads with the banker; he can’t pay higher interest or pay down the debt. While Bob still had some paying customers, he asked for more time, promising he would collect from his delinquent customers.

Bob began asking for payment. They smiled, promised to pay up, signed their tab and never showed up again. They were broke, unemployed alcoholics.

Bob was in a panic – and received a timely stroke of good fortune. The pandemic hit.

While many restaurants closed, much like a prohibition speakeasy, his customers remained loyal. The unexpected windfall of unemployment and government stimulus checks helped them pay down some of their debts. The government put a moratorium on rent. Bob’s customers drank, paying Bob instead of their landlord.

Bob paid down his bank debt, the bank was pleased, further increasing Bob’s line of credit. They breathed a sigh of relief; the crisis was averted.

In 2008 the government required banks to make a percentage of loans to historically uncreditworthy buyers. No money down, no problem! When adding origination fees, it wasn’t unusual for a loan to be more than the value of the home or other collateral.

The casino banks packaged the debts, coerced credit agencies into phony ratings, and sold them to investors and government agencies.

Lenders, no longer concerned about the creditworthiness of the borrower, wrote the loan and immediately sold the risky ones. Should the buyer default, it wasn’t their problem.

Adding fuel to the fire

Major corporations also jumped into the game. Combining low interest rates with questionable agency ratings, they borrowed trillions to buy back their stock, pay dividends and award themselves nice bonuses. They sold debt to line their pockets.

Much like BOOZE BONDS, casino banks packaged risky corporate bonds and peddled these “securities” to the public, the credit risk was no longer their problem.

When the debtor eventually defaults, they file for bankruptcy, putting more people out of work – creating a domino effect; suppliers don’t get paid, and they too go bankrupt.

A day of reckoning?

What about an economic downturn? What happens when billions of corporate and private BOOZE BONDS can’t be repaid?

Trillions in high-risk bonds are held in 401k, IRA, pension funds and insurance companies’ investment portfolios. A bond market collapse would destroy much of the nation’s wealth.

The banks and politicians can’t have that….

The problem creators are authorized by the government to fix it??

Congress authorized the Fed to create trillions more Magic Money; used to buy the risky “securities” they created and promoted, from all areas of the market. The “securities” are now held by the Fed.

Who is the big winner of this multitrillion-dollar, no-strings-attached cash infusion authorized by the government? The banks that own the Fed. David Stockman reports:

“The Fed is the most profitable company in the world by far.

The $322 billion of net profit was not a COVID-year aberration. The Fed has actually earned an average profit of $350 billion per year for the last decade.”

I Googled, “What happens to the profits at the Federal Reserve?” Investopedia reports:

“The Federal Reserve is a nonprofit entity. After its expenses are paid, any remaining profits are paid to the Department of the Treasury.

…. It’s a relationship that produces a considerable amount of money. The Federal Reserve contributed an estimated $54.9 billion to the Treasury in 2019.”

With no accountability, what the hell goes into almost $300 billion in expenses?

The debt treadmill is speeding up

Historically the Treasury Department auctioned government bonds at free market interest rates to finance debt. Today, they sell what they can at historic low rates, and the Fed magically prints the shortfall. Free market interest rates no longer exist. Many foreign governments stopped lending us money while allowing their current holdings to mature.

As the Fed continues to pluck trillions from the Magic Money Tree, the value of the currency declines – it’s called inflation. High inflation creates its own domino effect; investors flee dollar-denominated assets, destroying even more wealth.

In turn, the Fed creates more money out of thin air, buying even more government debt, adding it to the Fed’s balance sheet. Taxpayers are on the hook for it all.

Ayn Rand sums it up:

“All depressions are caused by government interference and the cure is always offered to take more of the poison that caused the disaster.

Depressions are not the result of a free economy.”

In the words of friend Chuck Butler, “Got Gold?” It is my antidote of choice.

This week I’m using my closing remarks for a public service announcement.

I got a letter that Philips has recalled several million breathing machines. The foam insulation has been breaking down and inhaled with some terrible side effects, which can include cancer. After dealing with lung cancer, that got my attention.

I went to the website, entered the serial number; damn, my machine is being recalled. They advise you to stop using it and contact your doctor. I found my old machine that I used for years. It too is on the recall list; the number of machines is in the millions.

I called the hotline and the Philips customer service agent read me what the lawyers told them to say. I use my machine every night, how do I get a replacement? I was told, eventually you will return your machine, it will be repaired and returned. They are waiting on FDA approval, have been doing so for months, and have no idea how long the process will take.

For at least 8 years, I have been possibly inhaling some bad stuff every night. My doctors agreed I should stop using the machine.

Philips competitors can’t keep up with the demand, which presents some new challenges. I am working on alternatives now.

If you know anyone who is using Philips breathing machines, please make them aware of this situation.

Since I started my cancer treatment, I have lost 30 pounds and it may turn out to be a blessing. I’m not snoring like I used to. So far, so good….

“Gold is unique among assets, in that it is not issued by any government or central bank, which means that its value is not influenced by political decisions or the solvency of one institution or another.”

My wife Jo sent along some “senior truisms” for our enjoyment: 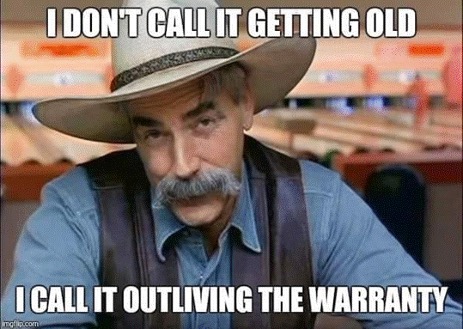