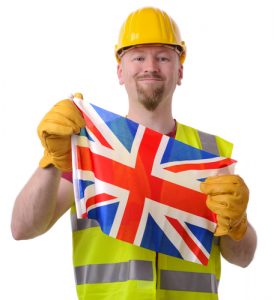 The average American is likely more interested in the latest episode of Game of Thrones or how their favorite baseball team is doing. Why such a big deal about the Brits (Brexit) leaving the European Union (EU)?

It’s important to understand why they voted to leave. This Europa website begins with a tribute to their “Founding Fathers”:

“The…visionary leaders inspired the creation of the European Union we live in today. Without their energy and motivation we would not be living in the climate of peace and stability that we take for granted nowadays. …. (They)…held the same ideals: a peaceful, united and prosperous Europe.

The European Union is set up with the aim of ending the frequent and bloody wars between neighbours, which culminated in the Second World War.”

When the British people voted to join the EU in 1973 they were promised peace and prosperity at the expense of some of their democratic rights to self-govern. Forty-three years later they were locked in a battle to vote on secession? Why?

My friend Mike Maloney suggested I watch Brexit the movie. It is an excellent documentary that was produced prior to the vote. The implication for all of us is significant.

The financial part is clear.

The Brits have voted to leave the union. There will be a two-year period where the “negotiations” take place for their exit. That will create uncertainty in the markets. That is positive for gold.

Today many publications are touting their wares – how to get rich by following their advice – taking advantage of the great opportunity. For those investing retirement money, I urge caution.

I’ve always had a special reverence for the “lunch pail” crowd. The following photo was taken in 1932. 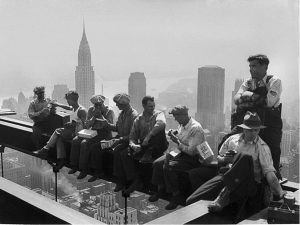 My grandparents told me the “lunch pail” workers were the backbone of America. They were the ones doing the heavy lifting for all of us. The working class tilted the scale in favor of leaving the European Union.

What started out with good intentions, as a union with free trade and common borders, has grown into an untenable bureaucracy. Many believe it is now stifling peace and prosperity.

Following are some quotes about the EU from various officials in the movie. At first I thought they were a bit extreme. I was frightened because I saw so many parallels to the US.

BBC reported, “Europe stunned by UK leave vote”. It’s the age-old battle. Does the power rest with the people to control those who govern, or vice-versa? Will the political class ever learn that governing against the will of the majority will eventually end in revolution? Hopefully, it’s a peaceful one.

Prior to the election, Ambrose Evans Pritchard summed it up well, “Brexit vote is about the supremacy of parliament and nothing else”.

“Stripped of distractions, it comes down to an elemental choice: whether to restore the full self-government of this nation, or to continue living under a higher supranational regime, ruled by a European Council that we do not elect in any meaningful sense, and that the British people can never remove, even when it persists in error.

…. We are deciding whether to be guided by a Commission with quasi-executive powers that operates more like the priesthood of the 13th Century papacy than a modern civil service; and whether to submit to a European Court of Justice (ECJ) that claims sweeping supremacy, with no right of appeal.”

While it may not be exactly like the US Civil war, it boils down to self-rule versus a powerful central government.

Do the elites really feel they are smarter than the people?

At least one British Member of Parliament feels that way.

“A British opposition lawmaker says Parliament should stop the “madness” and overturn the result of a referendum calling for Britain to leave the European Union.

Labour legislator David Lammy says Thursday’s national vote was non-binding and “our sovereign Parliament needs to now vote on whether we should quit the EU.”

The article goes on to say, “Leave” ended up winning Thursday’s contest with a 52 percent share of the vote and a turnout of 72 percent.” Had the vote turned out the way the elites preferred we would see headlines proclaiming a landslide victory.

Emily Badger writes in the Washington Post, “Brexit is a reminder some things just shouldn’t be decided by Referendum”:

“All of this was, perhaps, predictable, as some political scientists and historians have warned that a simple yes-or-no public referendum can be a terrible way to make a decision with such complex repercussions.

…. But David A. Bell, a Princeton historian writing in The New Republic. …as Greece was preparing for a referendum on its bailout, argues that the result of referendums is much more often anti-democratic.

…. He divided referendums into two categories: The first implicates fundamental questions of sovereignty (…. Should Scotland break away from Great Britain?) These kinds of referendum are appropriate, Bell argues: “They represent instances when a sovereign power, always ultimately held by the people …temporarily reverts to the people directly, so they can modify or replace these structures.”

…. Then there are referendums about questions that would otherwise be handled by the legislatures the people have already elected.”

How is “Should Scotland break away from Great Britain” any different than Britain breaking away from the EU?

Mr. Bell uses the example of the California referendum to cap property taxes in 1978, as an example of something the legislature should decide.

Mr. Bell, what do voters do when politicians do not honor their campaign promises? Had the political class not voted against the will of the majority, and taxed Joe Six Pack (formerly known as Lunch Pail Joe) up to his eyeballs, a referendum would not be necessary.

Leave it to the university elites and political columnists to validate the point of the movie so well, “You are not bright enough to decide the future of your country”.

Americans by an overwhelming 4-1 margin agree that the United Kingdom’s vote to leave the European Union was a sign of anger and dissatisfaction that can be seen in other countries, including the United States…. Just 16% call it an isolated referendum.”

The movie emphasized the issue was NOT choosing a political party; but rather self-government versus being ruled by elites who govern against the will of the majority. Get the power back in the hands of the people and vote for the party of your choice.

Both political parties in the US have systems creating the illusion of serving the people, while serving themselves. The democrat party is much more efficient with their primaries Super-delegate system. Many supporters of Bernie Sanders have lamented that the deck was stacked against him regardless of how the voters feel.

“Haugland, …blamed the media for misleading the public about the terms of delegates’ duties: “The simple question is: do the primaries choose the party’s nominee or do the delegates to the convention choose the nominee? It’s one or the other; it can’t be both.”

…. “Our duty and our responsibility as delegates is to protect and defend the right of the party and its members to choose the nominee of its party for the national race.” (Emphasis mine)

He added, “That right does not belong to the general public, it doesn’t belong to independent or unaffiliated voters or Democrats in many of the states that have open primaries. It belongs solely to Republicans.”

Americans, like the Brits, feel their peace and prosperity is being eroded and Washington is disinterested. What happens when both political parties are more interested in perpetuating their power than serving the people?

In a 2008 Wall Street Journal article, Russian academic Igor Panarin predicted: “…. (T)he U.S. will fall apart in 2010. …. that an economic and moral collapse will trigger a civil war and the eventual breakup of the U.S.” 2010 is past but the problems persist.

How many Americans would love a referendum for congressional term limits or not bailing out private corporations with our tax dollars?

Is anyone in Washington listening?

Our hearts and prayers go out to all the families that lost loved ones in the recent Dallas shootings. Vigilante justice has never done anything but make matters worse and wounds even deeper. I hope Mr. Panarin never says, “I told you so!”.

Last weekend Jo and I went to Nashville to visit some very dear cousins. We got to visit with my cousins Walter and Shirley. We used to discuss our childhood experiences together and now we are discussing great-grandchildren. What a wonderful, loving family. We have been close for almost 70 years. Where did the time go?

Jo’s cousin Lonnie is a Nashville icon and owns a very popular karaoke bar by Printer’s Alley. His establishment is ranked one of the top karaoke bars in the nation. Lonnie is an entrepreneurial visionary and has been dubbed The Prince of Printer’s Alley for good reason. Dozens of country and western stars have been discovered there. You never know who will walk in. Many popular entertainers have grabbed the karaoke microphone and entertained the crowd.

When Lonnie got us seats up front I feared it would be loud and we would be leaving early. We had so much fun we reluctantly left at 1:00AM. If you visit Nashville, it’s a must visit. Find Lonnie and say hello.

In light of the article and current events, I went back to Courtenay W’s quotes from ancient Greek philosophers. Some things never seem to change.