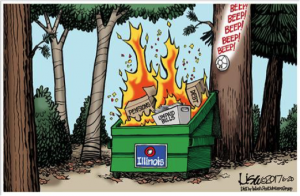 The Illinois debt saga continues. The state operated without a budget since 2015. In June, just before their fiscal year end, both S&P and Moody’s downgraded Illinois’ credit rating to one level above “junk bond” status.

“Legislative gridlock has sidetracked efforts not only to address pension needs but also to achieve fiscal balance, allowing a backlog of bills to approach $15 billion, or about 40% of the state’s operating budget. During the past year of fruitless negotiations and partisan wrangling, fundamental credit challenges have intensified enough to warrant a downgrade, regardless of whether a fiscal compromise is reached in an extended session.

…By our calculation, the state’s unfunded pension liability for its five major plans in aggregate grew 25% in the year ended June 30, 2016, to $251 billion.

…After eight downgrades in as many years, Illinois’ rating is an outlier among states, most of which are rated at least eight notches higher.”

“We’re like a banana republic,” Rauner said earlier this month, after the General Assembly failed, yet again, to pass a budget package by the regular session deadline. “We can’t manage our money.”

“My Office has very serious concerns that, …the State of Illinois will no longer be able to guarantee timely and predictable payments in a number of areas that we have to date managed (albeit with extreme difficulty)…

We are effectively hemorrhaging money as the state’s spending obligations have exceeded receipts by an average of over $600 million per month over the past year.”

Bloomberg follows the events and reported “…Yields on the state’s 10-year bonds soared (Emphasis mine) to 4.8%. …That’s the highest yield of all 22 states Bloomberg tracks.”

On Sunday July 2nd, the Illinois House approved a budget, sending it to the governor who promptly vetoed the bill. It includes a 32% income tax increase. He said, “This tax hike will solve none of our problems. In fact, in the long run, it will make our problems worse, not better.”

“Illinois bonds surged as the legislature moved closer to ending a record-long impasse over the budget, reducing the risk that the state’s bond rating will be cut to junk.

The rally came after the state senate overrode Governor Bruce Rauner’s veto to approve tax increases and the first full-year budget in two years, sending the measures to the House of Representatives.”

The Illinois House also overrode the veto. Whoopee! Illinois now has a budget. Wonder if it included overtime pay for working on the July 4th weekend?

Has Illinois fixed their budget crisis?

Some pundits think so:

“It does look good – it looks like the momentum is there,” said Gabriel Diederich, a portfolio manager at Wells Fargo Asset Management, which has Illinois debt among municipal bond holdings. “When you get shreds of fiscal management and fiscal prudence, even small steps have been greeted positively.”

“That may mean it’s a good time to buy, according to Citigroup. …The fifth most-populous state has “strong fundamentals” and the power to tax and grow its way out of the financial hole, the bank said in a report to clients this week, citing the diverse economy and strong legal security backing its debt. …Illinois hasn’t missed any bond payments and state law has required it to continue making monthly deposits to its debt-service funds.

“The state’s credit rating and bond prices have suffered and may present opportunity for a bold investor,” analysts Vikram Rai, Jack Muller and Loretta Bu, said. “We strongly encourage investors to take advantage of the cheapness of the front and intermediate IL GOs.” (Government Obligations)

Moody’s disagrees, “So far, the plan appears to lack concrete measures that will materially improve Illinois’ long-term capacity to address its unfunded pension liabilities.” On July 5th, Moody’s announced they were putting Illinois under review for another possible downgrade – to junk bond status.

Meaningful spending cuts are an unnatural act for Illinois politicians. They continue to kick the can down the road leaving a bigger problem for future generations. Even if their credit rating is not changed, their problems will multiply.

“Tax hikes have been tried in Illinois before. They’ve inevitably failed because they don’t fix the core problems of too much debt and too much spending. In fact, they allow such reckless behavior to continue,” said Michael Lucci, vice president of policy at the right-leaning Illinois Policy Institute (IPI). “Taxpayers need to put Illinois’ government on a diet, not the other way around.”

…The 2011-2014 Illinois income tax increase triggered a significant flight of income-earning power from the state. Illinois lost more than $14 billion of annual adjusted gross income during the four years of the tax increase, the IPI said.

…But there’s more than money management at issue, say observers.

…Major pension plan reform will require a change to the Illinois constitution. And for now, the state is just trying to keep the lights on.” (Emphasis mine)

The Illinois Constitution guarantees the pensions of state workers. The legislature passed a law addressing pension reform and the Illinois Supreme Court ruled it unconstitutional. In a unanimous decision the court ruled:

It is our obligation, however, just as it is theirs, to ensure that the law is followed…. Crisis is not an excuse to abandon the rule of law. It is a summons to defend it.”

Amending the State Constitution to enact pension reform has not happened.

While Illinois scrambles to keep the lights on, creditors are going to court for help. On June 30th, The Chicago Tribune reported:

“A federal judge on Friday ordered Illinois to start paying $293 million in state money toward Medicaid bills every month and an additional $1 billion over the course of the next year, worsening a cash-flow problem…”

The ruling prompted this response from the State Comptroller:

“…Friday’s ruling would cause her to likely have to cut payments to the state’s pension funds, state payroll or payments to local governments. Payments to bond holders won’t be interrupted”, she said.

When the politicos in Detroit could not find a solution for their fiscal woes, they filed for bankruptcy. The court appointed a referee to oversee the process and do the dirty work the elected representatives were unwilling or unable to do.

“What they secretly want is for the parent to step in and stop the behavior,” Chizewer said. “I think the state is asking the court to step in.” (Emphasis mine)

Adult behavior is an oxymoron when it comes to Illinois politicos.

Risk vs. Reward – BOLD or bad?

Illinois burns and pundits are looking to profit. Is this a good opportunity to invest retirement savings?

Here are some of the risks:

If Illinois does not default, investors should be considered BOLD. Is it worth an extra 2% to take on the high risk?

“The greater fool theory …states it is possible to make money by buying securities, whether overvalued or not, and later selling them at a profit because there will always be someone (a bigger or greater fool) who is willing to pay the higher price.”

If they don’t go bankrupt and default, in 10 years Illinois will be looking for a “bigger fool” to lend them even more money to pay off maturing bonds and finance their continued deficit spending.

Let’s hope the politicos don’t use any more tax dollars bailing out BOLD banks. Bankruptcy serves a good purpose, it punishes people for making BAD decisions. It’s about time some sanity came back into the bond market. Retirees should observe, not participate, when it comes to IL debt.

We put 7,075 miles on the van during our summer trip. We had a wonderful time, highlighted by seeing ALL of our grandchildren. We went to 40 baseball games in Indiana.

We just ordered a cool, collapsible wagon. Wish they had them when our kids were young. We no longer lug coolers, lawn chairs, snacks and umbrellas from the car to the field. These are really handy and fold up nicely. I have several uses here in AZ for our new accessory. When I am done, I can hang it on the garage wall.

Thanks again to regular readers who shop Amazon through this LINK. We get a small stipend and it helps us keep our website FREE.

We were in Tucumcari, NM (almost home) when friend, and former colleague, Jeff C. sent me a text encouraging me to post some photos of our trip. It never dawned on me that readers might have an interest, so we began snapping away.

It’s a beautiful drive from Albuquerque, NM to Flagstaff, AZ going over the continental divide. 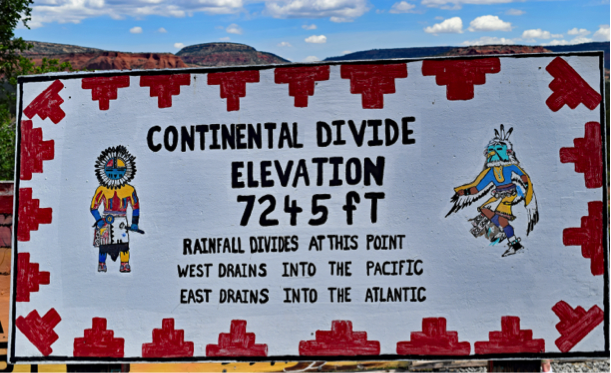 I had to crop it; the bushes in the foreground were blurry as the speed limit was 75mph. I was pleased with the sharpness we achieved while rolling down the highway.

I-40 parallels a major east-west railroad route. The road you see in the bottom of the photo is Route 66. Just for fun, we drove on it for a few miles.

If you have never driven across America, I suggest you put it on your bucket list, take your time and have fun.

Please drop me a note if you enjoy the photos and want me to continue to post them. dennis@milleronthemoney.com I love to hear from our readers.