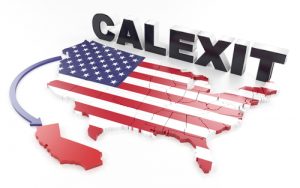 Our country has become bitterly divided. No matter who won the election, I predicted we would soon be reading about states wanting to secede from the union.

Even before President Trump was sworn in, the California movement, known as Calexit, began. The first step is to ask voters to adopt a state Constitutional Amendment revoking the U. S. Constitution as the supreme law.

“As the sixth largest economy in the world, California is more economically powerful than France and has a population larger than Poland. Point by point, California compares and competes with countries, not just the 49 other states.

Since 1987, California has been subsidizing the other states at a loss of tens and sometimes hundreds of billions of dollars in a single fiscal year.

…In our view, the United States of America represents so many things that conflict with Californian values, and our continued statehood means California will continue subsidizing the other states to our own detriment, and to the detriment of our children.”

They outline reasons why citizens should vote for secession. Point 9 is a bit different, “California has some of the best universities but in various ways, our schools are among the worst in the country.”

I’m unable to determine if the claim “hundreds of billions of dollars” is accurate. How is it calculated? Is a post office or military base returning money back to the state? Creditloan.com indicates California receives $.78 back for every $1.00 is sends to the federal government. Maybe they have a point.

Our founding fathers felt the values of the King of England conflicted with the values of the colonies. Many Americans cheered the British on when they opted out of the European Union. For both situations, oppressive taxation, different values and cost and control of the central government was a motivating factor.

Be careful what you wish for

Things are not all sunny in the land of milk and honey. Currently the California Public Employees’ Retirement System (CalPERS) is woefully underfunded. The Mercury News editorial, “CalPERS again falls short of addressing deficit” reports the fund has lowered the projected earnings estimates from 7.5% down to 7% in 2019. They add one inconvenient truth:

“To understand how far short this move falls, consider that CalPERS announced Wednesday that it hadn’t hit a 7 percent average over the last 20 years and, going forward, it estimates that there’s only roughly a 1-in-4 chance that it will meet that target.

… CalPERS consultant warns that the pension system should anticipate only an average 6.2 percent in each of the next 10 years.

… That places the system’s shortfall at about $170 billion, which averages more than $13,000 of debt for each California household.”

The optimistic vision of the secessionist movement overlook a major factor. The California political class is predominantly socialists, redistributing wealth through progressive taxation and free programs to voters to maintain their power. If secession brings an economic windfall it would quickly be spent. As Margaret Thatcher warned, “The problem with socialism is you run out of other people’s money.”

George Bernard Shaw said, “A government that robs Peter to pay Paul can always depend on the support of Paul.” In many cases Peter quietly moved away and took his money with him.

Remember when top professional golfer, Phil Michelson created quite a stir complaining about California taxes, while putting his home up for sale? He would have been better off staying quiet about his reasons. California Political Review reports:

“Billionaire David Tepper has moved from New Jersey to Florida, and the loss of his income tax could leave a $140 million hole. … Forty percent of the state’s revenue comes from personal-income tax – a third of which is collected from less than 1 percent of taxpayers. Tepper was New Jersey’s wealthiest resident.”

It’s not just the heavy hitters

When we moved to Phoenix we joined a local club in order to meet people. Each month new members stand up and introduce themselves. We noticed a large number of Californians. While my survey is unscientific, I’ve asked many why they moved. Every one mentioned how expensive California is to live. One former Californian remarked, “There are a lot of California refugees in Arizona and Nevada.”

We lived in Georgia when they passed a state income tax. While it’s progressive, the top rate (6%) kicks in at $7,000. At the time I was in my peak earning years and could live anywhere.

I was an early immigrant. The first time I paid GA income tax, I realized our other taxes did not go down. What did I get back from the government for confiscating an additional 6% of my earnings? We quickly moved to Florida, with no state income taxes. Florida is full of refugees fleeing other high tax states.

The migration continues. In 2013 the Tax Foundation published a State Migration Calculator and great graphic: 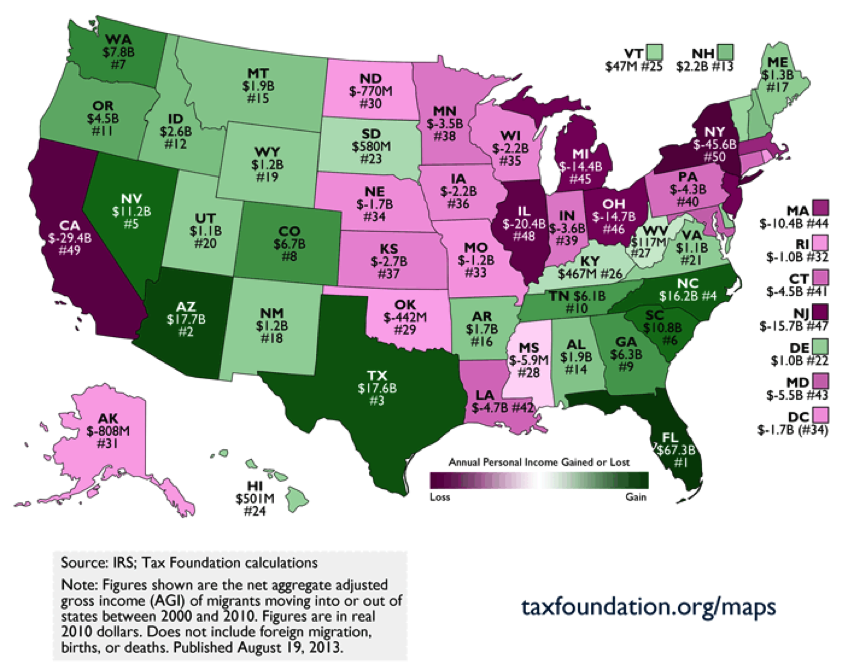 The high tax socialist states are losing billions in adjusted gross income, while states like Texas and Florida are growing. The Washington Examiner reports the trend is continuing and concludes, “The growth in no-income-tax and right-to-work states was fueled largely by net domestic migration rather than international migration (Emphasis mine), according to the 2016 Census estimates.”

The landscape is changing

The election of President Trump sent shock waves through much of the political class. Many public union pensions are woefully underfunded. They donated millions to Hillary Clinton’s election campaign and expected federal bailouts. They knew they could count on Mrs. Clinton; she has a great track record of rewarding her political donors. Today no one knows what the new administration will do.

In the meantime, the scramble is on. The politicians in states that have been heavily supporting Paul have a huge base, not because they have won over the hearts and minds of Peter; but rather because the working class got tired of being fleeced and left. The politicos have to find ways to make good on all their free programs. Cutting benefits will cause citizens to storm the palace. They must find ways to generate more revenue.

“To be clear, it is not legal for states to charge a true exit tax on citizens changing their residency from one state to another (this is not the case for the federal government, which does charge a large exit tax).

So what do high-tax states do to try and prevent their residents from moving their legal residence to low- or no-tax states? In a word, they audit them.”

When a taxpayer is audited, the agency issues an assessment for unpaid taxes. It’s not “innocent until proven guilty.” You must prove they are wrong or the assessment stands.

Once you intend to leave you are of no value to the politicos. Most people do not have the means to go to court. For some, it becomes a government shakedown to extract as much wealth as they can on your way out the door.

With the mindset of California voters, who knows what will happen?

I don’t recommend holding any California government debt, including holdings in bond funds. While the probability of secession may be small, might they establish their own currency and try to renegotiate their debt? Holding California debt is an unnecessary risk to take with retirement money.

Should they vote to secede, Californians would face a choice of leaving or staying. If you choose to leave, expect a hefty exit tax. If you are thinking about leaving, why wait? Walk quietly and beat the rush!

Stan the Annuity Man publishes the Income Investor digital newsletter. Last week he published my article, “Is Social Security Still The Best Annuity On the Planet?” His newsletter is free and I highly recommend it.

Last week I was in Daytona Beach. David Holland hosts a television show, “Plan $tronger” which airs on local channel WDSC (Channel 15) every Monday night at 7pm. We taped a couple of shows. If you are in the local area, please tune in.

As I was herded on the plane I mentioned to a fellow traveler I used to travel so much, I was a platinum cardholder for every major airline. He remarked, “Once you retire, they quickly forget you.” Boy, that’s the truth.

Not only do the free first class upgrades disappear, you are relegated to boarding group Z, the last to board while scrambling for storage space in an overhead bin. I was on the road 40+ weeks per year for more than three decades; regular business travelers earn those perks.

In the early days Southwest Airlines flew only in the state of Texas, based at Love Field in Dallas. Their motto was, “The Airline that Luv’s you”. Their flight announcements were hilarious. Friend Courtenay W. sent along some boarding announcements from Kulula Airlines. Apparently they too want to make it fun:

I envision children with panicky looks on their faces looking at mom and dad who warn them to behave on the flight.