How Can A Company Give Away Their Product And Be Worth Billions? 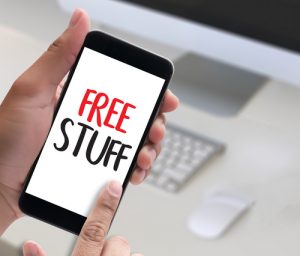 In 2016, Facebook (FB) earned over $10 billion, while seemingly giving away their product. FB’s sales averaged almost 50% growth over the last 5 years. The current stock price tops $150/share – the market values the company in excess of $425 billion. That’s pretty heavy lifting for a company that went public just five years ago.

Investors look for tech companies to continually invent new products. Apple did that with the Mac, iPhone and iPad, leading the world into a new dimension of technology.

Apple is a very profitable company. In the last year their stock price hit a low of $89.47 and is now approaching $150, giving Apple a Market Cap around $800 billion.

In some cases, small incremental product improvements don’t entice the consumer. If your phone takes great pictures, is it really worth spending $700 to upgrade to a new one with a few more mega-pixels?

Anyone who had to sit through a few accounting courses knows there are two kinds of costs – fixed cost and variable cost.

Variable costs change based on sales or production. Sales commissions are a good example. Commission expense varies by how many widgets are sold.

“…During 2014, an average of 96.6 million households “subscribed” to CNN, each paying an average of $7.32 per year. That equated to $710 million in revenues from cable-TV customers, 63 percent of all of CNN’s revenues for the year.” This is money CNN earned regardless of the fact that most paying it rarely if ever tuned in.

…CNN has lost 5 percent of its subscribers since 2010. But the monthly fee that the remaining cable subscribers pay for CNN has increased by nearly 25 percent! What a great market to be in, where you lose customers while raising prices and still manage to bring in higher revenues.”

Microsoft is similar in this regard. Microsoft currently sells their Office Home & Student 2016 program for $149.99. You can buy it and download it immediately. Once they have recovered their fixed cost, the next $149.99 download is almost 100% profit.

Facebook created a FREE website that is visited by millions of people daily, generating huge advertising revenues. As they continue to add viewers, their sales revenue jumped from approximately $12.5 billion in 2014 to $27.6 billion in 2016. Their gross profit margin (Sales minus cost of sales) is spectacular – 86.29%.

How can a company give their product away and be worth over $425 billion? Build a website that creates huge traffic attracting advertisers. Once they cover their fixed cost, the sky is the limit.

Stockholders love it! In the last year the low price was around $108, and it has increased to over $150/share. Is it a good buy today? I’m not a stock jockey; however I’ll mention the price/earnings ratio is currently over 42 as compared to Apple’s (approximately) 17.25.

I once worked with an analyst who specialized in valuing businesses that were for sale. A common metric was ten times profits. The market price of Facebook stock is 4 times higher than the metric. Are investors anticipating that much additional growth in sales and profits?

There is an old saying, “Buy on the rumor, sell the news”. Many investors trade in anticipation of an event – particularly in the tech sector. The theory is an exciting announcement is made and the stock prices jump accordingly. The event happens and is a HUGE hit. Investors pile in while the stock price soars even higher.

However, it rarely happens as anticipated. Many traders are happy to ride the momentum wave and let others jump in (“on the news”). The latter may end up losing money if projections are not met. Some call this “the greater fool theory”. You buy a tech stock at a high price, believing that an even greater fool will buy it from you in the future.

Not all tech companies are created equal

Twitter started as a social media website in 2006. Following Facebook, in 2013 they went public. Over the last three years the number of monthly active users jumped from approximately 255 million to 328 million. Their 2016 revenue was $2.5 billion; they have yet to turn a profit.

“Twitter has lost $2 billion since in 2011. …New management, products, designs and features haven’t done much to move the needle.

…It hasn’t been able to expand its reach the way its social media rivals like Facebook have. It’s hard for Twitter addicts to accept, but Twitter just hasn’t shown itself to be popular enough.

Shares have fallen by 77% since they reached their all-time high the day after Christmas in 2013.

Rumors that Twitter is up for sale have been around… But with such a messy balance sheet, it’s unclear who might be interested in buying it. The usual suspects – hedge funds and big tech companies – have hinted that they’re not interested.”

Stockholders must be hoping for a miracle. Shares prices dropped 77% from the all time high. The company has never made a profit and it’s still valued over $12 billion? Pity the youngster who saw Twitter shares deposited into their college fund in December 2013.

A friend recently assumed the responsibility of looking after his retired mother’s nest egg. Her investments had done very well over the years, averaging double-digit gains. He was shocked when he discovered over 90% of her retirement account was invested in one stock – Apple! He said it was “tough to sell mom on the fact she now has enough money to retire and it is time to rebalance and keep her nest egg safe”.

The Nasdaq 100 index is made up of the 100 largest companies trading on the exchange. They specifically exclude financial companies and have a heavy technology leaning. When the tech bubble burst in 2000, Nasdaq companies took a severe hit.

In 2015 Nasdaq.com reported, “3 Lessons for Investors From the Tech Bubble”.

1. No specific stock or sector is destined to rise forever. What goes up and then down does not always go back up again.

2. It is nearly impossible for an investor to avoid being caught up in a stock frenzy of some sort. There’s always a reason – even beyond the greater-fool theory – to justify a high share price. In the case of the tech bubble of the late 1990s, it was that the Internet would revolutionize…well, everything.

3. The best insurance against stock market disaster is diversification. Even if your investment horizon is decades long, it won’t help if you hold only a handful of stocks or sectors. Where many investors went wrong during the tech boom was not rebalancing their portfolios.

“The nature of bubbles, however, is that no one can tell when they’ll pop. Investors rushed to buy stocks in the late 1990s so they would not miss out on the profits that their friends were making. The buyers …firmly believed they could sell to some greater fool who would always pay more than they did.

It took 15 years for the market to return to the previous high. No one can predict when the next bubble will burst. When it happens it makes little difference if you own Apple, Facebook, Microsoft, or Twitter – they will all go down. While some may come back quicker than others, why take unnecessary risk?

The tech sector has the reputation of being high risk and (sometimes) high reward. When it comes to investing money earmarked for retirement, most cannot afford to get caught up in the hype. When the market turns, the programmed traders are shorting stocks, driving them down rapidly before many people can react. Preservation of capital takes precedence, – few investors can afford to see their nest egg drop 78% and not come back for 15+ years. There is never a bad time to take a profit!

As I completed this week’s article I realized I am trying to do what Facebook has done – but on a much smaller scale. I’m trying to build up a subscriber base that attracts advertisers and would be happy to break even – turning an expensive hobby into an inexpensive one.

Without a huge advertising budget, we rely on referrals and word of mouth to grow our base.

Regular readers have noted that we are producing a lot of free special reports on timely subjects. I’m told that is a good way to speed up the process of adding subscribers. Please feel free to share them with family and friends.

I appreciate every subscriber. A special thank you to those who have been kind enough to refer us to friends and have taken the time to drop me a note of encouragement. We have a long way to go but are making progress.

Maybe I’m stubborn, but I am determined to keep our website FREE.

I was overwhelmed by subscriber Robert H. who sent me a belated birthday wish:

“Your gift is knowing that your column and advices are very much “gifts” to others. In a time where information is disseminated in volumes through the Internet and periodicals, your readers always enjoy and look forward to your messages. I am comfortable in my speaking for others….lol.”

It’s subscribers like Robert that keep me energized and wanting to continue moving forward. Thank you for the kind thoughts.

Speaking of birthday, I found a cartoon that hits close to home: 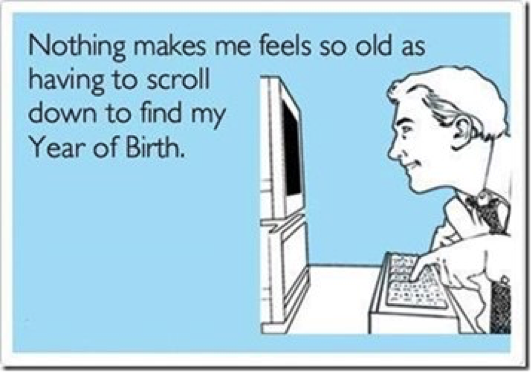