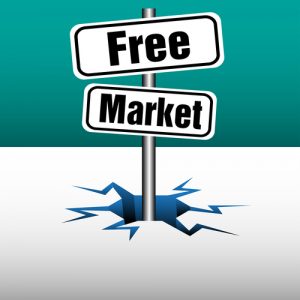 “Free market pricing? Well, nobody knows what the true free market price of the precious metals really is, because there never has been a free market in them since they were discovered…and now traded.”

What is free market pricing? I like the Wikipedia definition:

“One view is that a free market is a system in which the prices for goods and services are determined by the open market and consumers, in which the laws and forces of supply and demand are free from any intervention by a government, price-setting monopoly, or other authority.”

Most politicians think short term, from one election cycle to the next. If the government needs to raise revenue, it raises taxes. If representatives need votes, they increase give-away programs. Do whatever it takes to get reelected, and don’t worry about 10-20 years in the future.

While the politicos may applaud themselves for solving a short-term problem, many times they ignore the long-term effects, creating much bigger problems down the road. It’s up to the next generation to clean up the mess.

Taxes and the free market

One easy tax target for governments is raising corporate income taxes. It is widely popular because citizens are taught corporations are greedy. What the government doesn’t want you to know is citizens pay those taxes. They are factored in when determining the selling prices for their goods/services.

We citizens pay ALL taxes eventually.

“American companies are holding $2.5 trillion abroad, an increase of nearly 20 percent over the past two years … the total is equivalent to nearly 14 percent of total U.S. gross domestic product.

… The U.S. has the world’s highest corporate tax rate at 35 percent, and under current law any cash brought home would be taxed at that rate…

Capital Economics U.S. economist Andrew Hunter said in a note to clients, “This vast pile of foreign cash could provide a substantial boost to GDP if it was ever brought home.”

The long-term effects go beyond lost tax revenue. A system that discourages American companies from bringing cash home also encourages investment in other countries, building factories and creating jobs. If American companies are not competitive due to high taxes, high minimum wage laws or regulations they will either fail or move.

In the 1990’s I sat next to a prominent US senator at a breakfast. He showed us government statistics indicating that every time the minimum wage was increased, it created more unemployment requiring the government to spend more in welfare. I was naïve, asking why any politician would push for the increases. He explained that many politicians prefer pandering to their base to be reelected, rather than educating them and doing what is right for their constituents.

I was sad when I read this US Chronicle report:

“Some Californians rejoiced when they awoke to hear the news that Democratic Governor Jerry Brown had signed into law, a bill that would increase the minimum wage, state-wide, to $15 an hour.

Their hard work, their rallies, their protests, their marching into businesses and shutting them down temporarily, their attacks on the internet, and their chants in both English and Spanish had finally paid off.

However, … immediately after the raise was announced, American Apparel began laying off workers, and by the end of the day, more than 500 were unemployed.

The company is just one of many who are planning on taking their manufacturing jobs out of the country to take advantage of business friendly environments that can be found internationally.”

The politicians knew what would happen. Workers lose their jobs, taxes go up and the governor claims victory. Sad indeed!

Recently Cook County, Illinois (dominated by Chicago) voted to gradually increase the minimum wage from $8.25 and hour to $13 an hour, starting in July.

Main Street, which goes through the middle of Barrington, is also called County Line Road. One side is Cook County, while the other side is Lake County. Lake County has no plans to raise the minimum wage.

(Village Manager Jeff Lawler) said, “It would be difficult for Cook property owners to lease to retail businesses. I can very well see businesses locating to the Lake side.”

Suburban residents are quite familiar with the differences between the two counties. The Sales tax handbook reports that Cook County’s maximum sales tax rate (state, county and local sales taxes) is 11% – higher than 99% of the counties nationwide. Lake County’s maximum rate is 8.75%.

Local home improvement chain Menard’s closed their store on Rand Road near the county line while their store a few miles over the border did well. Home Depot reported sales increases in their Lake County store when the higher sales taxes went into effect.

Meanwhile Cook County politicians pander to their base as jobs and sales move elsewhere.

How people are voting today

In addition to the ballot box, many are voting with their feet. In 2014 it was estimated that nearly 20% of the 200,000 active Illinois retires live out of state.

“Public policies can make a difference in whether states grow – or, like Illinois, decline.

The growth in no-income-tax and right-to-work states was fueled largely by net domestic migration rather than international migration, according to the 2016 Census estimates.”

Americans are migrating and doing business in locations where there is less government interference in the market. Their prices are better, jobs are more plentiful and taxes are lower.

Fasten your seat belts – the battle lines are drawn

American workers pushed back in the recent election. They are tired of seeing their jobs disappear and government intrusion in their everyday lives. Unfortunately, many politicians, and much of the mainstream media believe government is the solution to every problem.

One side of the aisle wants to lower tax rates, reduce burdensome regulations, and do all they can to make US businesses more competitive in the market, which will also create jobs.

One way to reduce government debt is for the economy to grow and prosper. We need to become an export nation once again, selling our products to other countries throughout the world.

The other side of the aisle sees things differently. The rich, and mighty corporations are greedy and do not pay their fair share. The solution is higher taxes and more government control in the marketplace. In the name of fairness, they want to reallocate wealth.

The rhetoric will get hot, heavy and if recent events are a clue – ugly! Career politicians are more concerned about reelection than doing what is right for the country.

Sure – when the government is doing everything it can to help make businesses more competitive in the world markets, and enforcing laws breaking up cartels and monopolies (including the big banks); it is doing its job correctly.

That does not mean that you pollute the environment, put workers in terrible working environments or pay them substandard wages. Quite the contrary, it is a combination of government working together with private industry to let them prosper in the world – with that prosperity benefitting everyone in the country.

When corporations build new plants, or open new offices they look for good labor markets, plenty of available workers and reasonable wages. The law of supply and demand rules supreme!

Competition for workers causes wages to rise without any government intervention. Government tax revenue rises along the way. That is how the free market works. For America to prosper, American businesses must be competitive. We need to export our goods and services instead of jobs. Government must create the environment and then get the hell out of the way!

Last week we discussed gold and silver. I want to mention a great article by former colleague Jeff Clark who now writes for GoldSilver.com. Jeff provides a perfect example of today’s discussion of supply and demand.

Last weekend, driving home on the interstate, a sign warned chains were required just 75 miles north. We still are amazed at Arizona. The following day we enjoyed watching a flock of birds in the birdbath, 53 degrees and sunny. Just north in Flagstaff they had 8″ of snow and it is 15 degrees. Pity the poor truckers trying to drive through the mountains in those conditions.

Congratulations to Atlanta and New England who will meet in the Super Bowl. Atlanta has never won so my guess is they will be sentimental favorites.

One comment about the inauguration – I was proud of all the military personnel; and totally biased to the Marines of course.

I’ll close this week with a timely thought. Feel free to share it! 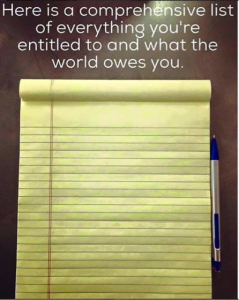