Are the Central Banks Manipulating the Price of Gold? 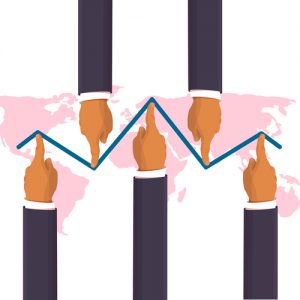 I was in a panic. I was living off the interest from our Certificates of Deposit (CDs). The government passed the Troubled Asset Relief Program (TARP), and interest rates tanked. My world went topsy-turvy as the banks redeemed my CDs. The new, lower rates won’t pay the bills. Not even close!

Isn’t high inflation caused by increasing the currency supply resulting in the value of each dollar (or currency unit) rapidly losing buying power?

I had two problems. How do I generate enough income to pay the bills? How do I protect our nest egg from inflation? I saw my parents lose a lot of buying power during the high-inflation Carter years.

My friends agreed; the inflation risk is high and gold is probably the best hedge. I signed up for Ed Steer’s Gold and Silver Digest. I recommend everyone read it daily.

I bought some gold. When the price hit all time highs, I congratulated myself on my profound wisdom. The TARP bill was followed with even more money creation. Despite the government flooding the banks with trillions of dollars the gold price dropped almost 50%. 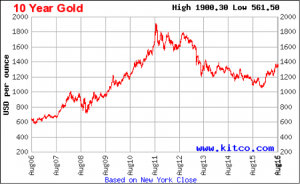 How could this happen? Ed Steer recently referenced an article by Peter Warburton, written in 2001. Here’s what caught my attention:

“What we see at present is a battle between the central banks and the collapse of the financial system fought on two fronts. On one front, the central banks preside over the creation of additional liquidity for the financial system in order to hold back the tide of debt defaults that would otherwise occur. On the other, they incite investment banks and other willing parties to bet against a rise in the prices of gold, oil, base metals, soft commodities or anything else that might be deemed an indicator of inherent value.

Their objective is to deprive the independent observer of any reliable benchmark against which to measure the eroding value, not only of the US dollar, but of all fiat currencies. Equally, they seek to deny the investor the opportunity to hedge against the fragility of the financial system by switching into a freely traded market for non-financial assets.” (Emphasis mine)

The central banks around the world continue to create money at an unprecedented pace, yet gold has not come close to it’s 2011 high.

It’s time to call Ed and ask for help.

DENNIS: Ed, on behalf of our readers, thank you for your time. Let’s get right to it.

How do they pull this off? Who are the culprits? What are they trying to accomplish? 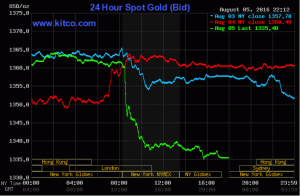 ED: First of all, Dennis, thanks for inviting me. You started with a three question barrage. I’ll take one at a time.

First, the price of gold is set in the COMEX futures market, nowhere else. The large U.S bullion banks, (JPMorgan is the ringleader) uses a combination of illegal bid-pulling, spoofing and high-frequency trading to manipulate technical fund traders into selling out their futures contracts, even if they don’t want to. This causes prices to decline. Most technical fund traders follow their black boxes. The bullion banks use techniques that automatically trigger their black boxes, effectively manipulating market prices.

As to the second question; along with JPMorgan, there’s HSBC USA, Citigroup – and probably Morgan Stanley and Goldman Sachs as well. I suspect that Canada’s Scotiabank is heavily involved, plus a few others.

The Peter Warburton quote answers the third part of your question thoroughly.

Price manipulation pays very well. About 40 banks and investment houses in total have figured out how to scam the brain-dead/black-box traders, while managing the price in the process. Silver analyst Ted Butler figures that the bullion banks and other commercial traders have made many billions from this scam over the years.

Let’s face it. If they got investigated and fined, the fines would be a pittance in comparison to the billions they have scammed.

DENNIS: You regularly tell readers that a mere handful of investment banks are holding huge short positions. Please elaborate on that.

ED: Four commercial traders, working in collusion – and most likely all U.S. Banks and/or investment houses – are short 36 percent of the total open interest in gold in the COMEX futures market at the moment.

DENNIS: If I held gold in an account with one of them, I’d want the price to go up, yet they’re suppressing the price. Why would anyone do business with them?

ED: The price management scheme by JPMorgan et al was not widely known for quite a while. Kyle Bass first mentioned it years ago. Today the top investors and big fund managers are catching on to the scheme; you can tell by what they write.

Any smart investor wouldn’t buy COMEX futures contracts through any of these firms, unless they were prepared to take physical delivery.

DENNIS: This is illegal, right? We have seen manipulation in the currency markets and the government has cracked down. Why not gold and silver?

ED: Absolutely, it’s illegal! Both the CME Group, (which owns and ‘regulates’ the COMEX) and the CFTC (Commodity Futures Trading Commission) ignore it even though they are both fully aware of what’s going on.

As J.P. Morgan himself said back in 1912 – “Gold is money, everything else is credit.” That applies to silver as well.

The reason the U.S. government, or any other government, won’t touch the precious metals price manipulation scheme is because the world’s bankers know that gold really is money – and that’s why they own most of it.

As Peter Warburton said, as long as you control the price of precious metals, you keep the price of all other commodities in check; you are making it easier to hide inflation and currency debasement.

GATA’s (Gold Anti-Trust Action Committee) Chris Powell calls it, “the secret knowledge of the universe“. It’s become another form of imperialism that the United States and her close allies have used to suppress all commodity prices – and the aspirations of the countries that produce them.

At the moment, the banks and governments are running the show. However, this financial paper money Ponzi scheme is getting very long in the tooth since Nixon closed the gold window. Its days are numbered.

DENNIS: If the price is being manipulated, what do you say to readers asking about investing in gold?

ED: There are two good reasons why you should buy gold today. This manipulation is keeping the price artificially low. This scheme has about run its course and those holding fiat money could suffer catastrophic consequences.

When price management schemes end, they do so violently – in the opposite direction of the price suppression. Prices of gold and silver will be shockingly higher, while the buying power of the currency drops accordingly.

Personally, I am buying as much as I can and I’m not alone. Both the Swiss National Bank and Germany’s Deutschebank recently announced they hold multi-billion dollar portfolios in precious metal stocks; all purchased this year. Lord Rothschild has just announced nearly 8% of his family’s investment portfolio is now in gold bullion.

DENNIS: One final question. The Federal Reserve is trying to create inflation with a target of 2%. Why not let the free market take over? Wouldn’t it help them reach their inflation target?

ED: I agree, higher precious metal prices would do the trick nicely – and then some. If the powers-that-be wants higher inflation, then let commodity prices run; they’ll have all the inflation they could ever want.

But playing the “Gold Card” as I call it is also fraught with danger. Along with the guaranteed higher inflation comes the strong possibility that the entire world’s economic, financial and monetary system will go down the drain.

Jim Rickards has said on many occasions; this event is coming soon – be prepared.

Playing the ‘gold card’ could do it.

Nietzsche had it right when he said, “that which is about to fall deserves to be pushed.”

DENNIS: Thanks again for your time. I appreciate it.

ED: My pleasure, thank you.

I believe gold should be part of a well-diversified portfolio. It is the best way to protect your wealth. Precious metals are the safety net providing insurance against inflation. Don’t let a manipulated market scare you away from reaching your personal “comfort level”.

Our government has over $20 trillion in debt and $100+ trillion in unfunded liabilities; the risk of high inflation is real. What happens when the bills come due? We can hope for the best, but must prepare for the worst. I hope I never have to sell my gold!

Last month we drove from Chicago to Phoenix paralleling old US Route 66 to Flagstaff.

“Leave anxiety in the dust. Studies show that driving on the open road may help to relieve stress. Take that theory for a test drive on Route 66.”

While most people despise rush hour traffic, driving the open road with no timetable is a lot of fun. One of the most stress free years of our lives was when Jo and I sold our home (furnished). We put our personal belongings in storage and spent a year in a motor home traveling on the open road.

The book “First We Quit Our Jobs” motivated Jo and I to give it a try. It compares the rat race and the open road. It’s a great read!

When we got home, we put our phones and I-Pads back in their familiar places with cords everywhere. Amazon offers a better way, a 7-Port USB Charging Station Dock.

Thanks again to our many readers who have ordered through our Amazon Link. Their small commission helps to offset some of our costs and keep this site free.

While discussing the open road, let’s remember some of the famous Burma Shave signs:

DON’T LOSE YOUR HEAD
TO GAIN A MINUTE
YOU NEED YOUR HEAD
YOUR BRAINS ARE IN IT.
Burma Shave

THE ONE WHO DRIVES
WHEN HE’S BEEN DRINKING
DEPENDS ON YOU
TO DO HIS THINKING.
Burma Shave

NO MATTER THE PRICE
NO MATTER HOW NEW
THE BEST SAFETY DEVICE
IN THE CAR IS YOU.
Burma Shave