Commencement Address To The Graduating Class Of 2020 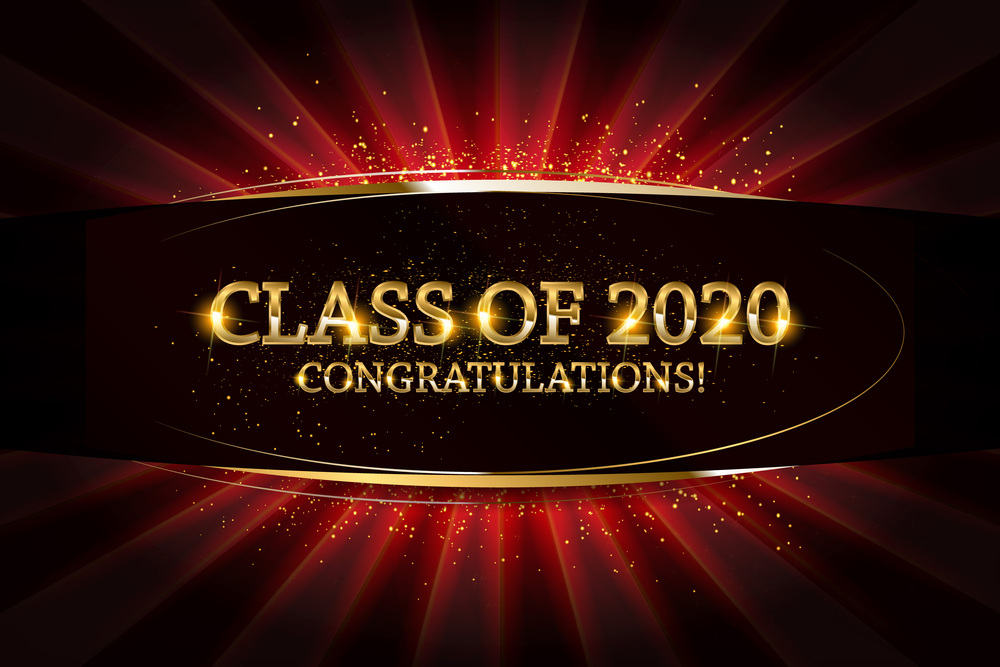 Congratulations graduates, you have worked hard and should be celebrating your academic success. Don’t allow a temporary setback to dampen your spirits!

Whether you are graduating from college, high school, grade school or something else, my message is the same.

Last year a reader sent me, “We Are What We Choose”. It’s the remarks by then 46-year-old Jeff Bezos (billionaire founder of Amazon) to the Princeton graduating class of 2010.  He concludes:

“I will hazard a prediction. When you are 80 years old, and in a quiet moment of reflection narrating for only yourself the most personal version of your life story, the telling that will be most compact and meaningful will be the series of choices you have made. In the end, we are our choices. Build yourself a great story.”

At 46, Bezos speaks theory. I recently turned 80 and speak from experience.

Immediately after my 79th birthday, I began cancer treatment. I’ve done a lot of reflecting on my life since then. He is right, life is a result of choices you made along the way.

Bezos posed 12 questions. His last question ends with, “will you be kind?” Regardless of your age, economic situation or position in life, being kind (as opposed to mean?) is certainly a virtue; hopefully part of your core values and should have started long before graduation.

I want to address what was unsaid

Bezos alluded to serving others. Who can argue with such a noble cause? That’s easy for a young billionaire to say. Life is not always that simple.

For most, serving others becomes a trade-off between time and money. My granddaughter married a fine young man. He chose to teach, at a very low salary, in a parochial school. He remarked, “I’ve made my choice. I want to make a difference, even though I could do better economically in another field.” He truly loves his students.

I told my wife Jo, “Let’s see how he feels after he has a couple of kids.” Having taught in industry, I’ve had dozens of students who started out with virtuous goals, only to change careers as life’s economic realities set in.

After working several part-time jobs to supplement his income, receiving food stamps because they were below the poverty level, and having a couple of children, he capitulated and changed careers. His income more than tripled and he is doing well.

Graduates – put yourself in a position where you can truly serve others, but take care of your family first.

When your children leave the nest, you’ll have more free time and money. There is still plenty of time to make a difference. With adult wisdom, you will find mentoring a very worthy endeavor. Don’t give up on the goal, for most it will take time to get there.

Understand your most important choices in life.

Choose your mate wisely. Take your time. Find a mate with similar core values and a good friend. When you are 80, you will know if you made the right choice.

Your choices affect others. Every self-employed person understands their choices affect the families of those who work for them. Many of your personal life choices will affect the next several generations of your own family. Look at the effects of your choices to be sure you don’t create a bigger problem down the road for all concerned.

Have children for the right reason at the right time. I was a young man in the 1960s when President Johnson passed domestic programs called, “The Great Society”. I told my wife the government is incentivizing out of wedlock birth. The adverse consequences of those programs have hurt millions of Americans for generations.

The Florida Times Union article, Three Rules for staying out of poverty reports on a Brookings Institute Study:

“Brookings whittled down a lot of analysis into three simple rules. You can avoid poverty by:

If you do all those three things, your chance of falling into poverty is just 2 percent. Meanwhile, you’ll have a 74 percent chance of being in the middle class.

These rules apply to all races and ethnic groups. Unfortunately, breaking these rules is becoming more commonplace for all racial groups.

Ron Haskins, co-author of the Brookings study,…called the results “astounding,” noting that it’s time to emphasize the role that personal decisions have on staying out of the poorhouse.” (Emphasis mine)

This message should be constantly reinforced, beginning in grade school.

Sometimes choices you make when young have to be dealt with – for decades. I married at 19 and had three children by age 22 (pre-birth control pill). For ten years I worked 2-3 jobs, fulfilled my military obligation and went to night school; all at the same time. When you are worried about daily survival, it is difficult to focus on anything else. That is the voice of experience!

Know your most important job in life. If you choose to become a parent, your most important job is to raise your offspring to survive on this planet as independent adults; financially, emotionally and socially. As the study points out, waiting until you are prepared to have children still allows for plenty of time to help others; particularly your grandchildren.

Understand the difference between mother, father, mom and dad. While many use the terms seamlessly, there is a major difference. When I was three months old, my father stole all the money in the house and left. We never saw him again.

Becoming a parent is a matter of biology. Becoming a mom or dad is a choice. It’s a major commitment to parenting; loving, caring, protecting, educating and being a major part of a child’s life for the duration.

As a father, step-father and always a dad, I can personally attest to the fact that it is a choice you make; and you love them all the same. Raising children is a hard job.

In the early days of the women’s movement, I taught at the American Management Association. They offered classes on “empowering women”. I’ll never forget a discussion in the teacher’s lounge with a female instructor who emphatically said, “Women don’t need men for anything other than a sperm donor.” I suggested that may be true, however, studies have shown that children raised by loving, caring parents generally fare much better in life. She got up and walked away.

I saw my mother struggle as a single parent. While some feminists may disagree with me, if you are not willing or able to commit to being a mom or dad, don’t have children. That is an acceptable choice in today’s world. Your choices in life go beyond yourself.

Make a mess – clean it up! As I look back, there are many choices that I made that turned out poorly. I’m responsible for my own behavior, and the consequences. In some cases, it took a decade or more to get things back on track. While I can lament making a poor choice, there is no guarantee that other choices would have turned out better. Make a mess, clean it up and learn from it; that simple!

You can always land on your feet if you set your mind to it. I’ve seen couples in a bad marriage start their lives over; everyone ended up better off. I’ve seen alcoholics and drug addicts turn their lives around. I’ve seen people dig themselves into horrible financial holes, turn things around and become wealthy. Bad choices can be followed by good choices.

Whether you are a young teen graduating from grade school, or a college graduate entering the workforce, your education, both at home and in school is preparing you to survive, and hopefully to thrive on this planet. The sooner you accept responsibility for your own behavior, the quicker you are on your way to independence.

Jeff Bezos is right; “In the end, we are our choices. Build yourself a great story.”

Become the captain of your own ship and you will have plenty of opportunities to serve mankind and help others. Godspeed and good luck!

I want to close with something different this week. A friend sent me this, which is appropriate to today’s article and our current times.

WE ARE NOT IN THE SAME BOAT!

Your ship could be shipwrecked and mine might not be. Or vice versa.

For some, quarantine is optimal. A moment of reflection, of reconnection, easy in flip flops, with a cocktail or coffee. For others, this is a desperate financial & family crisis.

For some that live alone they’re facing endless loneliness. While for others it is peace, rest & time with their mother, father, sons & daughters.

Some were concerned about getting candy for Easter while others worried about enough food for the weekend. Some want to go back to work because they don’t qualify for unemployment and are running out of money. Others want to kill those who break the quarantine.

Some have experienced the near death of the virus; may have already lost someone or are not sure if their loved ones are going to make it. Others don’t believe this is a big deal.

Some have faith in God and expect miracles during this 2020. Others say the worst is yet to come.

So, friends, we are not in the same boat. We are going through a time when our perceptions and needs are completely different.

Each of us will emerge, in our own way, from this storm. It is very important to see beyond what is seen at first glance. Not just looking, actually seeing. We are all on different ships during this storm experiencing a very different journey.”

My conclusion. Americans have survived horrible wars, depressions, plagues and natural disasters…and managed to recover and land on their feet. We will do so again…

We will close with a clever sign in front of a Texas restaurant: 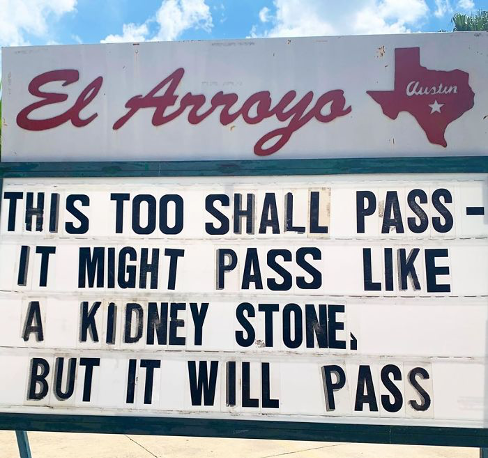