Does Congress Have the Courage to Break up the Banks? 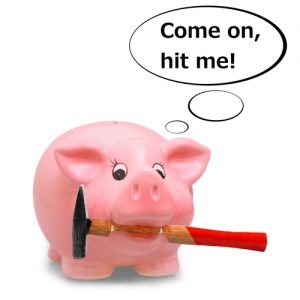 It’s time to go back to the trust-busting days of yesteryear and break up the big banks. Does congress represent the people or special interests?

Consumers lost when the Glass-Steagall act was repealed in 1999. It created banks, “Too Big to Fail”, with billions in taxpayer bailouts and mind-boggling fraudulent activity.

“Glass-Steagall had long separated commercial banks (which lend money) and investment banks (which organize the sale of bonds and equities)….

Commercial banks are not supposed to be high-risk ventures; they are supposed to manage other people’s money very conservatively. (That’s why) … the government agrees to pick up the tab should they fail.

Investment banks … have traditionally managed rich people’s money-people who can take bigger risks in order to get bigger returns.

When repeal of Glass-Steagall brought investment and commercial banks together, the investment-bank culture came out on top. There was a demand for the kind of high returns that could be obtained only through high leverage and big risk taking.”

The repeal created a small number of huge investment banks. CNBC tells us 5 biggest banks now own almost half the industry.

The $7 trillion in assets of the 5 biggest banks (JPMorgan Chase, Bank of America, Wells Fargo, Citigroup and U.S. Bancorp) were almost 45% of the industry total at the end of 2014. 6,504 banks divvy up the remainder.

Despite the 2010 “Wall Street Reform and Consumer Protection Act”, regulators warn the 5 top banks are “Still too Big To Fail.” In a letter to JP Morgan regulators warn, “The current arrangement could pose serious adverse effects to the financial stability of the United States.”

Criminal activity is the norm

The big banks have resorted to a wide array of criminal activity to boost their profits and bonuses.

CNBC has been tracking them and tells us, fines reached $150 billion. The graph below highlights the wide spectrum of illegal activities: 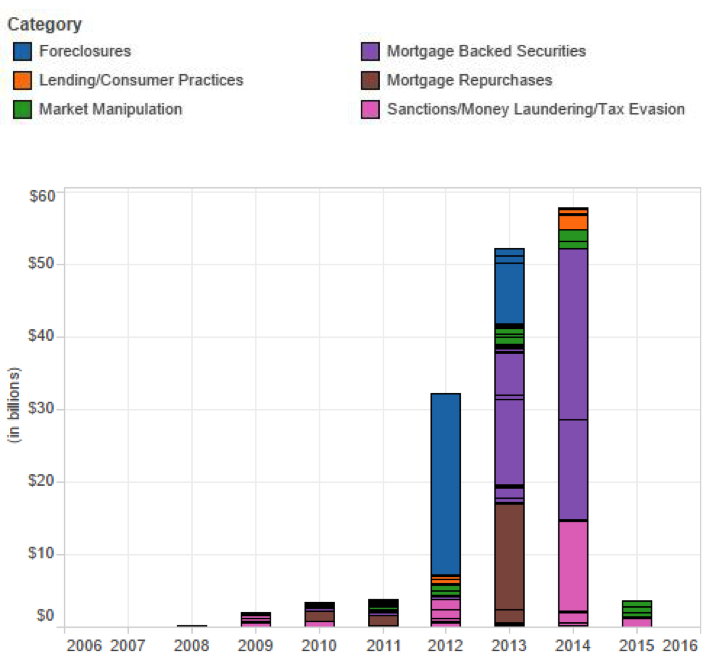 “it does not appear that Wells Fargo is requiring Carrie Tolstedt, the Wells Fargo executive who was in charge of the unit where employees opened more than 2 million largely unauthorized customer accounts – … to give back any of her nine-figure pay.

… Tolstedt gets to keep all of it because she technically retired.”

The article is about her not having to return any bonus money. Nothing is said about criminal charges.

The above quote is found in the USA Today article, “5 Banks guilty of rate-rigging, pay more than $5B”. Sadly, no individual bank employees were hit with criminal charges. Jimmy Gurule, a former Assistant Attorney General and Treasury official was asked about the criminal pleas and massive fines:

“Once again the actual perpetrators and criminal architects of the fraud scheme will avoid criminal liability, … While the payment of these large fines may help to reduce the federal deficit, such penalties will do little to change the pervasive culture of corruption that currently exists in the banking sector. Real change will only occur when corrupt bank officials are indicted, convicted and sent to prison for their crimes.” (Emphasis mine).

Why does this criminal behavior occur?

Richard Eskow quotes a study in his article, “The Big Banks Are Corrupt – And Getting Worse”.

“The percentage of bankers who believed their own colleagues had engaged in illegal or unethical behavior has nearly doubled since 2012. And more than one-third of those earning $500,000 or more annually said they had first-hand knowledge of wrongdoing in the workplace.”

“Nearly one-third of respondents (32 percent) believe compensation structures or bonus plans in place at their company could incentivize employees to compromise ethics or violate the law.”

Incentivizing illegal and unethical behavior appears at all levels of the banking industry. The Center for Popular Democracy published a revealing report. It begins at the teller level:

“Details from the legal settlements with the biggest U.S. banks illustrate the micro-level mechanisms the top banks used to enact their predatory practices.

Workers are forced by management to meet these sales goals based on hawking mismatched or predatory products and services… Workers are often threatened with termination if they fail to meet these goals.”

I feel sorry for these front line workers.

One call center worker sums it up well: “… What they want, what they need, isn’t important to us. Selling them a product is.” (Emphasis mine)

The US Inspector General produced a Special Report about the TARP bill and its aftermath. Here is all you need to know:

“Treasury allowed some of the largest banks to exit TARP without meeting the Government’s criteria … the banks … wanted to exit TARP to avoid the public stigma of remaining in TARP and limits on executive compensation.” (Emphasis mine)

Reuters looked at Goldman Sachs and reported, “Goldman and Morgan Stanley, the two largest U.S. investment banks, converted to bank holding companies …Goldman, in the first half of 2009, set aside $11.3 billion for its year-end bonus pool, equal to about half of its revenues.” (Emphasis mine)

During my career I served over 40 of the top 500 US corporations. I’ve never seen an industry that comes close to allocating 50% of their revenues for bonuses. All the little bonuses paid to the little people add up to huge bonuses for management.

No bank should be too big to fail! Break them up! Separate commercial and investment banks. Let the big investment banks take the risk on their own money. Taxpayers should not reward their greed and bail them out for their mistakes.

The Brookings Institute reviewed the two major party platforms and concluded, “Democrats and Republicans agree: Reinstate Glass-Steagall.” Both parties promised it so we can take that one to the bank! (Sarcasm intended)

Get out of jail free

When the big boys are fined over $204 billion but no one gets prosecuted criminally, you know they are well connected.

Like Monopoly game bankers, the banks currently hold “Get Out of Jail Free” cards.

They buy protection from the politicos every way they can, campaign donations, speaking fees, donations to special funds and Lord knows what else.

I found the recent announcement, Goldman Sachs tells employees they cannot donate to Trump Campaign – but no restriction on Clinton’s both laughable and frightening.

“False perception that the firm was circumventing pay-to-play rules” is laughable. Here’s what’s frightening. Should Trump get elected and try to rein them in, are the banks that confident they have bought enough members of congress to protect their gravy train?

The market will prevail

If Congress does nothing, the banks will still eventually collapse, the market will see to that. I wrote a short lullaby.

Rock-a-bye-bankers, on the world top.

When the truth shows, your cartel it will rock.

When the buck breaks the markets will fall.

Down will come bankers, once and for all.

It’s time for the politicos to put the needs of the voters ahead of special interests. Break up the “too big to fail” banks now, just like the trust-busting days of the past. It’s easier and safer than waiting for them to collapse again.

I don’t see any way the government can bail them out without a voter revolution or worse; there just won’t be enough tar and feathers to go around.

I was excited to announce our “Miller, On The Money Annuity Guide” this week. We have discounted it for our current readers asking for feedback before committing funds for marketing and advertising. So far the feedback is terrific and many thanks to those who responded. If you have not done so, please take a look at it. I’m encouraging feedback and any suggestions for other topics you would like me to research. Click here to get your copy today.

The goal is to keep this website FREE and generate enough revenue to cover our costs through advertising and other special offerings.

Cub fans are excited to clinch the Central Division Championship. WGN-TV points out how pathetic the franchise has been: