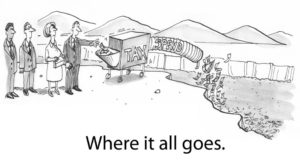 Politicians of all flavors continually remind us social security is in danger of going bankrupt. Now our esteemed leaders want to fix it by increasing benefits. What could possibly go wrong?

“Former Federal Reserve Chairman Alan Greenspan warns that cuts may be needed to eventually save the Social Security system.

Greenspan also predicted a slowdown in the U.S. economy could stem from an overloading of entitlement programs that aren’t being funded.

…. He said “the actuaries of the Social Insurance system say…to be actuarially solvent through the life of the programs, we would have to cut benefits by 25 percent right now and extending into the future.”

He said eventually America will have to come to some resolution with entitlement benefits because “the end of the road is very serious trouble,” while adding that defined benefits have been a big problem.”

When did Social Security become an entitlement program?

The law was titled “Federal Insurance Contributions Act” (FICA). The government required employers and employees to contribute to the insurance program to help fund our retirement. Benefits were based on the insurance premiums paid.

Somewhere along the way our government, regardless of political party, became more like George Orwell’s character “Big Brother”. For generations, the insurance premiums paid exceeded the benefits paid out. Big Brother spent the excess collections “for its own sake”, filling the trust fund with IOU’s; mere political promises to fulfill their obligations.

That $73 billion deficit requires $73 billion in new public debt because,…there is no real money sitting in [the trust funds] – just a bunch of IOUs. Thus, when the Social Security Administration pays out benefits that exceed its payroll tax collections, the government converts those trust fund IOUs to new public debt.

Big Al Greenspan suggests an immediate 25% benefit cut and converting the program to a “defined contribution” type program. Big Brother knows that would cause the masses to storm the castle.

Big Brother’s looking out for ya!

Nancy Altman reports in Forbes, “A Huge Step Forward In The Quest To Expand Social Security”: (my emphasis)

…. Congress has added no new protections nor voted increases in benefits for over half a century…. What stopped the building was a billionaire-funded campaign to undermine Social Security. That decades-long campaign succeeded in convincing too many policymakers, ….that not only can’t we afford to expand Social Security, we can’t even keep the promises already made.”

Big Al and The Heritage Foundation are convinced the program is fiscally unsustainable. If a public company handled their pension plan like Big Brother handled social security, their leaders would be in jail.

Max Richtman, writes in The Hill, “A bill to boost Social Security will finally get a full and fair hearing”. (my emphasis)

Among other things, the bill would:

1. Provide a 2 percent benefit bump for all beneficiaries.

2. Protect retirees against inflation with a new formula for calculating cost-of-living adjustments, the Consumer Price Index for the Elderly (CPI-E).

These improvements – and the extension of Social Security’s solvency to the end of the century – would be paid for by adjusting the payroll tax wage cap so that the wealthy contribute their fair share.”

Jamie Hopkins provides details in this Forbes article: (my emphasis)

“…. The benefit increase would be around 2 percent…. Lower wage earners would see the biggest increase in benefits. The minimum benefit would be set at 25 percent above the poverty line, ensuring a safety net for workers in retirement and continuing the initial purpose of Social Security – to provide a floor of income for keeping retired lower-end earners out of poverty.”

How will Big Brother pay for these expanded benefits?

“The new means for funding the Social Security system would be to tax high-income earners on wages over $400,000. The tax would only impact the top 0.4 percent of wage earners but would bring in significant revenue.

Currently, Social Security taxes stop at roughly wages of $132,900. The new system would essentially start the tax back up again at $400,000. It is not entirely clear if this provision – crucial to the bill’s success – will garner support on both sides of the political aisle.”

“The Social Security 2100 Act aims to raise revenue such that no benefit cuts need to be made over the long term (the next 75 years). It also intends to expand benefits for current and future beneficiaries. According to Chief Actuary Stephen Goss, the estimated $13.2 trillion budget deficit between 2034 and 2092 would be replaced by a $2.1 trillion net surplus – a $15.3 trillion swing.”

Big Brother says “Trust me, we will have a surplus.” BS, politicos say that every time they “reform” social security.

That averages around $36 billion a year – a mere rounding error. Don’t you just love government math!

Who is the .04% who foots the bill? Most billionaires make their money through investing, not subject to social security taxes. In 2004, CNN writes, “Gates gets pay hike”. Microsoft Chairman Bill Gates earned under $1 million in salary, but received $176 million in dividends, increasing to $311 million the following year.

It’s the small business owner, paying both shares of the social security tax (proposed raising to 14.8%), who will be most affected. Raising taxes on small business causes unemployment.

Dave Gonigam, asks some tough questions in this Agora Article: (my emphasis)

“”Wait a minute – you said that $132,900 rises with inflation every year. Doesn’t that mean eventually the ‘doughnut hole’ goes away and all income would be subject to payroll tax?”

“OK, so would those higher payroll tax contributions translate to higher benefits in retirement?”

Answer: No. (Really, was there any doubt?)

“The Social Security program is intended to be primarily a required-savings program….” says William Reichenstein, business professor emeritus at Baylor.”

Is America willing to take this major step toward socialism, giving Big Brother even more control over our money and lives?

This bill is a ploy to force all members of Congress to take a stand on social security before the upcoming elections.

This is right out of George Orwell’s book, baiting the socialism trap to make the bill politically popular. Big Brother knows the inhabitants will gladly take benefits as long as they don’t have to pay for them – making them even more dependent on Big Brother.

Should the bill get through the government sausage making machine, it will be so full of political compromise, it won’t be long before taxpayers will be faced with the same problem – long before the end of the century.

I’m worried. Big Brother is not just kicking the can down the road like every other social security reform bill, they are trying to bribe the public to take another major step toward a socialist nation. That will cause many bigger problems down the road.

Do we “inhabitants” really want Big Brother to steal more individual wealth and redistribute it for their benefit? Welfare, food stamps and other entitlements are means tested, will social security benefits soon follow?

What if the old saying, “The masses can VOTE their way into socialism, but you always end up having to SHOOT your way out of it”, is true?

What are we doing to future generations?

Thanks to all who sent kind wishes last week when I mentioned my cancer issues. Bottom line – we know what it is, where it is, and the proposed treatment has an 85%+ probability of success (cure). Yeah, it will be a bumpy summer. Many have gone before me and the treatment is a small price to pay for the gift of life.

I try to answer all my email. Reader Wayne O. from New Mexico had some questions. Unfortunately, his email address does not work. Wayne, please contact me from a different address with your question.

If you ask me a legitimate question, I will probably answer it if I can. If you get no response it is probably because the system bounced it.

What happened to the Tampa Bay Lightning? They had the best team in hockey and were thoroughly trounced in the first round of the NHL playoffs. I had hoped to watch them play deep into the summer. They scored 3 quick goals in the first period of the first game, then were outscored 19-5 for the remainder of the playoffs. Congratulation to Columbus, I hope they do well.

Boyhood friend Tom G. sent along our humor for the week: