Could it really happen? 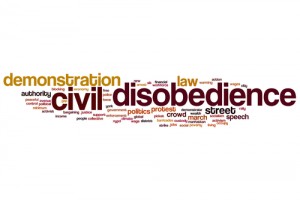 I was sitting on the couch going through my reading stack; it was almost bedtime. My wife Jo asked, “Do you think that could really happen?” Being immersed in four straight articles predicting everything from a stock market collapse to a huge currency collapse, I responded with, “The Fed seems to be out of options, the stock market is very shaky, inevitably there has to be a major correction and a lot of retirees will be hurt.”

“No, that’s not what I mean”, she said as she pointed at the television news channel. A political commentator was discussing our divided country and predicting social unrest that would make the 1960’s riots pale in comparison. She raised her voice and shook her finger toward the riot scene on the TV and asked, “COULD THAT REALLY HAPPEN?”

We both agreed it could happen, but no one knows exactly what will happen and how serious things might become. About an hour past our normal bedtime we both agreed the need for retirees and baby boomers to protect their life savings should not be ignored.

I don’t know what it is about the word offshore. The first time I mentioned it to Jo she said, “I’m not leaving the grandchildren!” It needs to be clarified.

I was recently interviewed by Douglas Goldstein, CFP® (who runs an independent financial firm called Profile Investment Services, Ltd.) for his radio show, Goldstein on Gelt. Doug is a cross-border financial advisor, helping people outside the United States with their U.S. brokerage and IRA accounts. He’s a fascinating person who is an expert on the three issues I mentioned. He walks the walk and is actively working with a number of clients who are doing the same thing. I realized I needed to be interviewing him, a true expert on offshore investing. Fortunately he agreed and shared some of his experience.

DENNIS: Doug, on behalf of our readers, thank you for taking the time to visit today. Let’s get to it… Many people I speak with feel that investing offshore is illegal. The only people who do so are drug dealers or those trying to hide money. Doug, what do you say to people with those concerns?

DOUG: You need to distinguish between what’s illegal and what’s perfectly legal. A U.S. brokerage firm is not allowed to offer an offshore mutual fund to an American client, for example. Along the same vein, an offshore mutual fund company may not offer its product to a U.S. citizen without being registered with the SEC under the 1940 Company Act. On the other hand, a non-U.S. citizen can legally buy almost any U.S. security or offshore fund.

To complicate matters further, some U.S. mutual fund companies refuse to sell their product to anyone (American or not) living overseas. A U.S. citizen is free to buy the equity of any company, international or domestic. Likewise, a U.S. citizen may buy any sovereign or domestic bond, no matter the country of origin, with the exception of prohibited countries such as North Korea or Iran, etc.

DENNIS: The Federal Reserve created $4 trillion from nothing over the last 7 years. That’s sure never happened before. We see what has happened in Argentina, Greece, and Cyprus. What are you telling baby boomers and retirees who are concerned about making their nest egg last?

DOUG: I’m an optimist at heart, and I believe that the trend over the long term will be good. Moreover, I believe in American ingenuity and fortitude. That doesn’t mean, though, that the U.S. markets are always the best place to invest. In fact, I don’t think the American stock exchange has ever been the #1 performing marketing in any year. So spreading out the risk over a variety of countries makes sense.

I’m a believer in “prepare for the worst and hope for the best and may your worries never come true.”

DENNIS: Personally I have the bulk of my Roth IRA offshore. The SEC has put some heavy regulation on offshore firms holding money for US clients. You mentioned to me that you have clients living offshore that have issues with mutual funds and residency issues. Can you explain that please?

DOUG: Because of a rigid regulatory environment relating to clients overseas, many large investment companies have decided to close up that side of their business. The anti-money laundering and “know your client” rules have become too expensive for them, and the cost-benefit analysis has tipped the scales away from serving their clients to buffering their bottom lines instead. That has left a lot of people stranded.

But the good news is that there is no legal reason why U.S. firms can’t maintain their clients living off of American soil; those firms just choose not to. Many companies that specialize in “cross-border” investors, however, will happily work on your account with you and it can stay in an SIPC-insured account in America. That’s what I spend most of my day doing.

There are also some offshore firms who work with banks who have been properly certified to handle US accounts. The key is to make sure whoever you work with understands and complies with US law.

DENNIS: I know we both agree that the idea of diversification is better than “all your eggs in one basket.” With all the turmoil going on in the world and markets, investors must protect themselves. Whether it is diversifying into offshore investments, physically moving offshore, or both, are there any tips you want to share to make it easier for people?

DOUG: As far as moving yourself offshore, I would suggest try living in the foreign country for six months or a year to make sure you really like the lifestyle.

From the money standpoint, I would start by making as few changes as possible. Don’t rock your financial boat. Instead, keep money in U.S. banks and brokerage firms just like you always have. Slowly, very slowly, you can begin with local banking in your new country of domicile. Make sure you work with an accountant who is familiar with both U.S. rules as well as the requirements of your new homeland. Be sure to talk to a financial advisor who specializes in cross-border clientele, not someone for whom you would be his token overseas client.

We’ve got a great free tool that you can use right now to get a customized report about what forms you would need to open an account, what address requirements are for the account, and which types of investments you can buy. Check it out at www.Profile-Financial.com/Interactive.

DENNIS: Doug, thank you for taking the time to share your thoughts with our readers today.

DOUG: My pleasure Dennis, thanks for inviting me.

There you have it from someone who is currently living offshore and helping many clients grow and maintain their nest egg all over the world.

The current political and economic situation in the United States causes me some concern. As Jo and I agree, the worst could happen; however we are not ready to predict any degree of what will happen. I agree with Doug. Americans are ingenious, and capable of adjusting and making things work. Individually, and as a society, I have faith in hard working America.

Like any major catastrophe, some people are totally wiped out and have to start their personal and financial lives over. They are normally blind-sided because they ignored the warning signs.

Others may get nailed a good bit, but are fortunate enough to have salvaged some resources that can be deployed for a faster recovery, while some investors actually gain ground during bad times.

Baby boomers and retirees have passed the midpoint and do not have the luxury of time being on their side. Taking caution, diversifying internationally, and investing conservatively are prudent steps to protect your financial future.

How big is the risk?

I currently have several safe fixed income investments offshore paying decent interest rates in today’s times. If our world gets back on an even keel, and our fears never materialize, the interest I earn offshore helps pay the bills just like interest does in the United States. It’s a little more work to get things set up; however the added safety is well worth it to us.

Having part of our core holdings in gold and silver also gives us the peace of mind that, should a currency rapidly inflate, we have some protection.

I love Doug’s optimistic approach. Stay positive, proceed at your own pace, and play by the rules working with a qualified professional.

The next time the television blared one of those way out predictions, Jo looked at me, shrugged her shoulders and said, “We are prepared as best we can, let’s enjoy life!” She then took the clicker and turned on the Home and Garden Channel.

Click on the following, “What you need to know about choosing a Financial Advisor” to listen to my interview with Doug. My portion starts at the 6:00 minute mark. It was a fun interview.

Last weekend my beloved Chicago Cubs played the Arizona Diamondbacks. I’ve watched thousands of baseball games in my lifetime and never before have I seen: