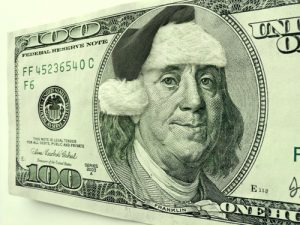 The numbers on the US Debt Clock are spinning at a dazzling pace. US government debt is now over $21 trillion, $174 thousand per taxpayer. Add another $3 trillion for debts of state and local government on the stack.

Unfunded federal government promises are almost $113 trillion, $900,000 per taxpayer, not including another $6 trillion in state unfunded pension liabilities.

It’s fiscally impossible for the debts to be repaid. Governments borrow money and make political promises on the backs of future generations. If the numbers were double (or triple) what they are today; would our lives be any different? We can’t pay it back, why not just continue frivolously spending as long as people are fool enough to lend us money?

Does anyone really care?

Ignore the political class and their allies. Here is an example.

Nobel Prize winning economist Paul Krugman has an impressive educational pedigree – on paper. While he may be an economics professor at Princeton and the London School of Economics, he tarnishes the reputation of all economists, putting politics ahead of common sense.

In October 2016, anticipating the election of Hillary Clinton, he wrote, “Debt, Diversion, Distraction”.

“Are debt scolds demanding that we slash spending and raise taxes right away? Actually, no: the economy is still weak, interest rates still low…and as a matter of macroeconomic prudence we should probably be running bigger, not smaller deficits in the medium term. (Emphasis mine)

…. So my message to the deficit scolds is this: yes, we may face some hard choices a couple of decades from now. But we might not, and in any case, there aren’t any choices that must be made now.”

“…. Eight years ago, with the economy in free fall, I wrote that we had entered an era of “depression economics,” in which the usual rules of economic policy no longer applied…deficit spending was essential to support the economy, and attempts to balance the budget would be destructive.

…. But these predictions were always conditional, applying only to an economy far from full employment. That was the kind of economy President Obama inherited; but the Trump-Putin administration will, instead, come into power at a time when full employment has been more or less restored.”

In October 2016 the economy was “still weak” and we shouldn’t worry about deficits or debt for a couple of decades. Less than 80 days later the economy magically changed and now deficits matter?

If the politicians don’t care, should we?

Prior to the recent tax cut, The Chicago Tribune reported:

“If the House GOP tax plan becomes law, nearly 81 million Americans – 47.5 percent of all tax filers – would pay nothing in federal income taxes next year.”

Those who pay no taxes (particularly when receiving government handouts) probably don’t care about the deficit.

What about the remaining 52.5% that are working their tails off, seeing their hard-earned tax dollars (and more) being spent by an irresponsible government?

Can something bad really happen?

Common sense economics would indicate, governments creating money out of thin air might temporarily prop up the economy, but eventually it would create a large debt bubble. When it pops, expect catastrophic consequences.

In 2008, when the government started bailing out the banks, many urged caution, suggesting high inflation and our unsustainable debts would finally come home to roost. It hasn’t happened – yet.

“Markets don’t like uncertainty. …. Presidential advisors Peter Navarro and Larry Kudlow – wrong about just about everything for just about forever – could be right this time.

Maybe the economy really is as strong as an ox. And maybe stocks will go up from here to eternity. But it’s not what we see….

Not that we are always right. ….

Yes…our error was that we misjudged the power of wrongheaded claptrap. Fake money talks louder…and BS walks further than we thought! (Emphasis mine)

We thought the fake money-pumping scheme had reached its end back in 2009.

Yes, we should care, and yes bad things can happen. Count on the predictability of the political class. Anyone with wealth or income becomes a target to finance their political spending. We need to protect ourselves.

What economists should we listen to?

I prefer economists with no political agenda – genuinely concerned about helping average hard-working citizens navigate the current and future potential challenges ahead.

Good friend, Dr. Lacy Hunt is tops on my list. He “calls them like he sees them” without any bias. He’s an excellent educator helping us navigate some difficult economic waters.

It begins with a discussion of the Fed’s policies over the last decade:

“Nearly nine years into the current economic expansion, Federal Reserve policy actions appear to be benign…. Changes in the reserve, monetary and credit aggregates, which have always been the most important Fed levers…indicate however that central bank policy has turned highly restrictive. These conditions put the economy’s growth at risk over the short run, while sizable increases in federal debt will serve to diminish, not enhance, economic growth over the long run.” (Emphasis mine)

It’s not just a US problem:

“No matter how U.S., Japanese, Chinese, European or emerging market debt is financed or owned, and regardless of the economic system, the path is stagnation and then decline. Even central bank funding of debt will not negate diminishing returns.”

“While many believe that surging debt will boost economic growth, the law of diminishing returns indicates that extreme indebtedness will impede economic growth and ultimately result in economic decline. …. The standard of living cannot be raised without increasing output.” (Emphasis mine)

Increased debt equates to increased spending and economic output – theoretically! While debt, both government and private, has reached historic levels, they question the premise over the long term.

Where are we headed?

“As debt continues to increase, real GDP starts to fall. At this point, debt has reached the point of negative returns, resulting in the end game of extreme indebtedness.” (Emphasis mine)

What is the end game?

When Dr. Lacy Hunt uses the term “end game” we should all take heed; he chooses his words carefully.

Their current newsletter reinforces what we intuitively believed a decade ago, you don’t cure a debt problem with more debt.

How much longer can we borrow and spend before we see the inevitable economic decline? Might we face another great depression?

Might the end game be controlled by others? When creditors lose confidence in the US, the economy and the dollar, they’ll start unloading dollars, causing interest rates to rise – negatively impacting the economy.

No one knows what or when

At the end of a Casey conference a few years ago, the speakers were seated on the stage and the audience asked questions. The main concern – when and what will the end game look like.

They had no idea. Some made predictions, most felt the wheels were soon going to fall off soon – they were wrong.

One participant asked, “Inflation or deflation?” The response of the experts was, “Yes.” The consensus was we could experience high inflation which might be the last major blow to the economy; and then quickly move into deflation and perhaps a major depression.

No one knows for sure how it will shake out, but it won’t be pretty.

While government debt may not matter to the political class, it should matter to everyone who hopes to save and retire comfortably.

Prepare for the worst and hope for the best. Diversify, own real assets and not just paper. While many have been wrong on the timing, Dr. Hunt has clearly highlighted the trend. Take heed! Those who use some common sense and take some reasonable precautions will fare much better than most.

The National Geographic Channel ran a cool show about the Black Hills of South Dakota. Jo and I were fascinated by the annual buffalo round-up in Custer State Park. They bring in around 1100 head to a corral, tag them and give them shots.

Twenty years ago, we sold our house and bought a motor home and decided to fulltime it, touring the country. Our motor home adventures turned out to be some of the most fun years of our lives.

We towed a small Jeep and took off on our first trip – to the Black Hills, with many stops (Graceland, Branson and Deadwood) along the way. Mt. Rushmore is incredible! 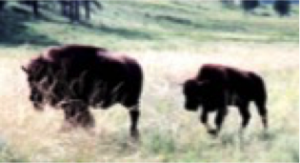 The highlight of the trip was heading down a gravel road and finding the buffalo herd. They were off in the distance and beautiful. They started toward us and, all of a sudden, we were in the middle of the herd as they crossed the road. Many were bigger than our little jeep. Our hearts were pounding as we hoped nothing spooked them causing a stampede. I can still feel the excitement as I type….

The annual round-up is a big thing; people bring their lawn chairs as the cowboys and cowgirls bring the herd into the corral. Jo remarked she wants to go. It’s on the bucket list!

When it comes to the national debt, this cartoon sums up how many people feel: 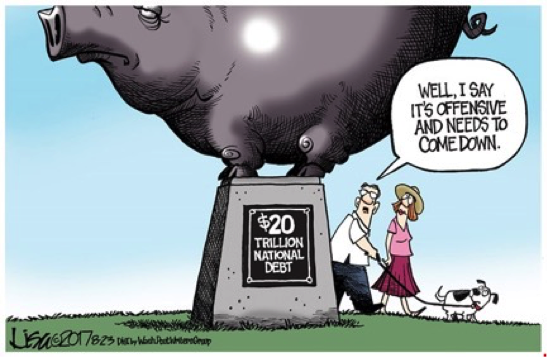