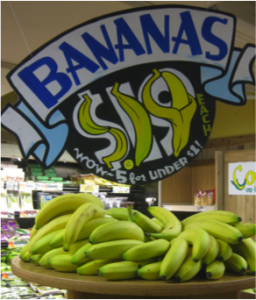 Legendary congressional veteran Claude Pepper was a spokesman for the elderly. One of his often-copied quotes applies today:

“A stockbroker urged me to buy a stock that would triple its value every year. I told him, at my age, I don’t even buy green bananas.”

Today his comments apply not only to stocks but also bonds and Certificates of Deposit (CD). Long-term commitments to fixed income investments may be a high-risk proposition – don’t buy green bananas!

In Mr. Pepper’s day, he could count on solid, safe bonds or CDs paying interest rates above the inflation rate. Not anymore….

This graph shows the historical rate for ten-year treasuries. For the 30-year period beginning in the late 1960’s, retirees could count on 6% interest in safe CDs or bonds. With the bank bailout in 2008, the Federal Reserve stepped in and quickly dropped interest rates to historic lows and have held them down for almost a decade.

Every time there is a financial crisis the Fed jumps in, makes a U-turn and cuts interest rates to spur the economy. As we recently outlined, Dr. Lacy Hunt feels the feds economic stimulation is facing diminishing returns and will eventually create a bigger problem.

In December 2015 the Fed started another U-turn, raising rates. The second hike came a year later. They sped up the process with four additional hikes and announced, they expect to raise interest rates three times next year, one more than previously planned.

He warns of negative consequences:

“So if she (Kansas City Fed President Esther George) is proposing to significantly increase the pace, it would have to be done by outright selling securities into the market, which would further change the dynamics of the market, just when the US Treasury will be issuing a record amount of new debt to finance the growing deficits.

In order to find buyers for all those Treasuries that would flood the market, the yields would have to rise to be very appealing, (Emphasis mine) so that investors would buy Treasuries rather than other securities. When yields rise, by definition bond prices fall. This would ricochet throughout the market with a substantive repricing of all assets.”

“The 10-year U.S. Treasury yield rose above 3 percent for the first time since January 2014, in a signal that higher interest rates are ahead…. amid an onslaught of supply and a Federal Reserve intent on boosting interest rates.”

“Of course, just because the market hit a milestone doesn’t mean investors need to fret about runaway interest rates just yet. JPMorgan estimates the 10-year yield will end 2018 at 3.15 percent….”

Really! No need to fret? – Followed by reality:

“…. However, bond traders have to grapple with a deluge of new government debt. The U.S. budget deficit will surpass $1 trillion by 2020, two years sooner than previously estimated…. At the same time, the Fed is trimming its balance sheet, meaning the amount of net new debt is poised to surge in the years ahead.”

“Retail sales unexpectedly fell again in February. It was the third straight monthly drop and the first time the US economy has seen three straight months of declining retail sales since 2012.

…. According to CNBC, households cut back on purchases of motor vehicles and other big-ticket items, pointing to a slowdown in economic growth in the first quarter.

…. Inventory numbers also indicate people aren’t buying what’s on the shelves. According to the Commerce Department, business inventories rose 0.6% on the heels of a 6% rise in December.

So, why is this happening? …. Americans are broke.”

“GDPNow is not an official forecast…. Rather, it is best viewed as a running estimate of real GDP growth based on available data for the current measured quarter. There are no subjective adjustments made to GDPNow – the estimate is based solely on the mathematical results of the model.” 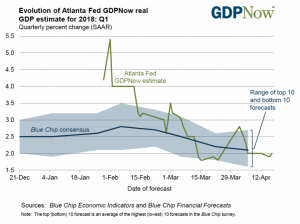 While the report is “unofficial”, does the Federal Reserve, manning the helm of our economy, have any clue? The Fed is hell-bent on quickly raising interest, speeding around the U-turn ignoring any caution warnings.

With credit tightening and debt at historic levels, consumer spending is slowing down, affecting the labor market and stock prices.

When interest rates tanked, many investors, insurance companies, and pension funds looked to the stock market for good dividend yields. As interest rates rise, money will flow back to fixed income. Dividend stocks could suffer a quick decline, particularly if the big boys start shifting their investments – beware!

I’m keeping our stop losses tight to make sure we lock in gains and minimize losses when the market turns.

Retirees should not be speculating in the bond market. Unless you are comfortable holding bonds until maturity, you are taking a big risk.

Inflation. The Fed has targeted 2% for an inflation rate. The government has gerrymandered the inflation statistics and they are not reliable. John Williams exposes the flaws with his Shadowstats reports. If inflation were reported today, in the same manner, it was in 1990, it would be around 6%.

This chart tracks the government reported numbers over the last decade:

High inflation may be looming on the horizon. It’s a good time to review your holdings and rebalance. Avoid locking yourself into investments that could be hurt by inflation.

My online broker currently offers the following for safe fixed-income investments. These yields change regularly, however, the point will be clear.

Where are the “appealing yields” to incentivize savers to tie up their money for several years?

Most bonds and CDs are “callable”, meaning the borrower (not you, the lender) has the right to “call in” the debt at any time. In 2008 all our 5-6% CDs were “called in” and could not be replaced with anything close to those rates. If interest rates rise, the lender receives below market rates until maturity. If interest rates drop, expect the borrower to get out of the deal.

Are you willing to bet that we won’t experience higher inflation or higher interest rates over the next 5-10 years? Neither am I!

While investors may want to start moving out of stocks as the economy slows, jumping into long-term commitments could prevent them from taking advantage of some real opportunities ahead.

If the stock market tanks, there will certainly be good buying opportunities. If Mr. Richter is right and the fed “floods” the market, interest rates could rise considerably, offering some great fixed income returns.

In the meantime, my wife and I are buying very short-term CDs (ripe, not a touch of green) and laddering them. We’re willing to forego a bit of income today for the prospects of what may lie ahead. As Mr. Richter said, yields will have to be “very appealing” for us to buy green bananas. Stay tuned!

Some of congressman Claude Pepper’s quotes are keepers:

“Claude Pepper, the unabashed liberal Representative…became a champion of the elderly in a political career that spanned 60 years, died yesterday…. The oldest member of Congress, he was 88 years old and lived in Miami.”

While congressman Pepper pedaled until the very end, I found his quote about politicians hilarious. Today he would be considered part of the “Swamp”.

Jo and I are finishing our drive across America to daughter Holly’s in Indiana. On Saturday we fly to south Florida for granddaughter Sarah’s high school graduation. Way to go, Sarah, so proud of you!

Sarah is headed off to college. Let today’s humor serve as a warning to all young people…. 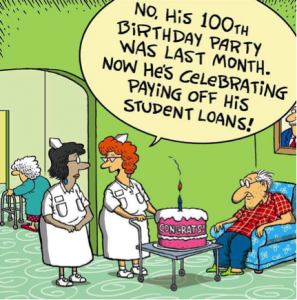