Don’t get caught in the debt trap! 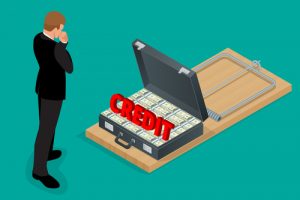 Hardly a day goes by without an article blaring about record levels of debt and warning of a collapse. Irresponsible borrowing can adversely affect everyone, including those who lived within their means.

Reuters reports, “Americans’ debt back at record high after nearly a decade”:

“Americans’ debt level reached a record high this year, surpassing the peak touched just as the worst of the recession was taking hold in 2008, …households …now lean …more on auto and student loans.”

Bloomberg weighs in on student loans, “Student debt in America has hit a new record”:

…Close to one-quarter of student debtors whose bills have come due are either in default or at least 90 days late on their required monthly payments… The federal government owns or guarantees more than 90 percent of all student debt.”

Fed economists raised concern over the 11% of student loan debt that was “seriously delinquent”, yet a Fed spokesman tells us not to worry:

“This record debt level is neither a reason to celebrate nor a cause for alarm,” Donghoon Lee, a research officer at the New York Fed, said in the report.

The federal government continues to borrow. CNN Money reports, “Mnuchin to Congress: “Raise the Debt Ceiling before you go home.”

“The Treasury Department’s power to borrow money expired on March 16. Although it won’t run out of cash until sometime this fall, any delay could risk hurting the government’s credit rating and sending markets into turmoil.”

“The TSP recently announced that the government has begun borrowing from the G Fund to avoid running up against the debt ceiling limit.

In 2016 (pre-election) Bloomberg ran an article by Noah Smith, “America is Nowhere Close to Having a Debt Crisis”.

“…If government debt gets so large that the only way to avoid a default is to hold down interest rates forever, those low rates can eventually have negative effects on the economy. Investors can lose their confidence in a government’s ability to repay its debt, forcing the central bank to print money to fund the government, which raises the risk of inflation.

However, the U.S. is nowhere near this point. The national debt is modest and sustainable, and the federal government’s borrowing has been remarkably responsible. (Emphasis mine).

This represents a remarkable – possibly even excessive – display of fiscal responsibility by the U.S. government. During the Great Recession, when millions were out of work, the government ran a big deficit in an effort to stimulate the economy. But as the economy recovered, higher taxes brought in more revenue and spending was reined in. Incidentally, this is exactly what standard Keynesian economic policy suggests.

…For now, the U.S. is living in the greatest period of fiscal responsibility since the second Clinton administration.

… Resist the urge to engage in debt hysterics, please.”

Expect the mainstream media to engage in debt hysterics when congress takes up raising the debt ceiling.

Look at the facts – form your own opinion

We’ll use the US Debt Clock for guidance. An individual’s net worth is easily calculated by taking their assets (what they own) and subtracting their liabilities (what they owe); what’s left over is their net worth.

The Total National Assets (corporate, small business and household assets) equals $132 trillion. The total Personal Debt is $18 trillion, leaving a net worth of approximately $114 trillion. It appears Americans are in pretty good shape; however there is a caveat…

“Insolvency tends to happen when liabilities are greater than assets. That’s very basic accounting. One of the U.S. government’s assets is its ability to tax the U.S. economy for revenue. (Emphasis mine)”

How much of our money has the government committed to spend?

Mr. Smith ignored the government promises committing tax dollars that are not funded – called unfunded liabilities. The total is over $106 trillion ($885,000+ per taxpayer). Subtract those commitments and we are $12 trillion in the hole.

If the government confiscated 100% of the wealth in America today, and used it to pay all the bills and keep all the promises, we would end up $12 trillion in debt and no assets remaining.

It seemed too simple. I asked good friend and mentor Chuck Butler, (see the Daily Pfennig) if I missed something. Here is his response:

“You hit the nail on the head bang on!

When the country finds that it has accumulated too much debt, they have four choices…

I’ve told people for years, that Debt is Slavery…”

What does this mean for seniors and savers?

Individual and government debt plus unfunded promises now exceed the net worth of the nation. Many citizens rely on Social Security and Medicare promises to look after their needs in their retirement years. Everyone wants the problems solved, but not at their expense. We expect the government to keep the promises we have relied on!

“Current generations are net receivers of public resources, while future generations of Americans are expected to foot the bill.”

All age groups are receiving more in benefits than they pay in taxes. Politicians, using tax dollars to buy votes is an ancient craft. The cost of government promises pushed on to future generations is impossible for them to pay.

While default is an option, the banks hold much of the government debt and historically the politicos saved the banking system at the expense of the citizens.

High inflation can wipe out the buying power of the citizens quickly (see Argentina and Venezuela). Angry citizens, with little to lose, can make things very difficult on the political class.

No one knows what a government, desperate to stay in power, will do. Seniors and savers should focus on what they can control themselves.

Invest in yourself. Anything that can improve your talents, skills and ability to earn money cannot be taken away from you.

While the government may tax some of the fruit of your labor, if you have talent and a good work ethic, it is a great asset and will allow you to survive regardless of what the government does.

Education is a continuous process, choose wisely! While the colleges and universities offer all kinds of majors, liberal arts majors are less likely to be paid as well as medical professionals or skilled tradesmen.

The business term is “return on investment”. Education comes with several costs, including money and time. Invest it wisely to improve your talents throughout your life.

Find something you love, your passion, and turn it into an enjoyable career. You will be glad you did. Many friends who worked well beyond their normal retirement age ask, “Why should I quit, I am having too much fun?”

Never stop looking after your tree. Your retirement nest egg will not manage itself, nor should you abdicate the responsibility to others. Check out, “If all you have is a hammer, everything looks like a nail”. Licensed, well-meaning professionals have a financial interest in your nest egg.

Make the time to self-educate about various investments and how they should fit together to make a safe, balanced portfolio. Continuing your financial education throughout your life is a must!

Use all legal means to protect yourself from confiscatory government. It would be silly to have your entire nest egg in one stock, bond or market sector. Having all your net worth in one country or currency is also risky. You can invest your money in other countries, just follow the law and reporting requirements.

If you don’t feel comfortable going offshore check out Everbank. They allow you to invest in FDIC insured foreign currency Certificates of Deposit.

Control what you can. While the nation may be collectively broke, your behavior will determine how well you enjoy YOUR retirement. The Great Depression affected everyone, yet those who were prudent and prepared fared much better than others. No one wants to be a debt slave, regardless of their age!

Check out timeanddate.com, it’s pretty cool. I recommend showing the site to grandchildren, the graphics are great and things are easily understood.

The summer solstice occurred here in Evansville, IN on Tuesday the 20th.

It’s been getting progressively hotter at the ball park.

Right now the crops are green but local farmers are in need of rain. With this heat I’m told it won’t be much longer before leaves start to turn brown. The forecast shows low probability for rain; however the skies are full of dark clouds regularly. Time for them to open up and help the farmers.

I want to thank our readers who have been using our link to Amazon for their purchases. When you use the link we receive a small stipend which allows us to keep our website FREE.

Check out these chair umbrellas; they are really neat. Jo and I each have one. They clamp on the side of the chair and are easily adjustable.

Why does it seem like every ball game we are on the side of the field looking directly into the sun? Jo likes the fact one side of the shade is longer and they can be adjusted to work like a long visor on a cap and keep the sun out of your eyes.

Lifelong friend Tom G. sent along some cute sayings by a cynical philosopher: