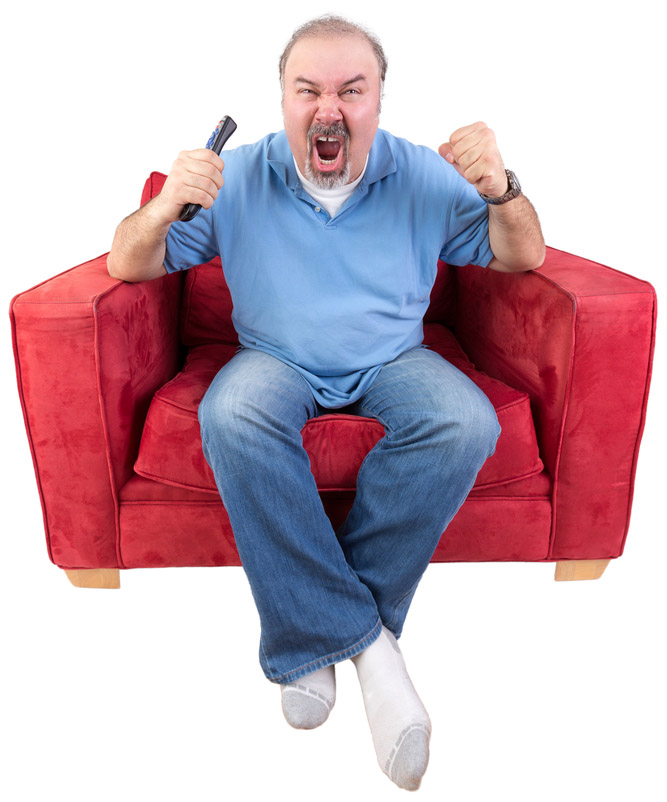 I grabbed the clicker; “Turn off the damn TV!” No, I didn’t turn off hyped political commentary; it was the Weather Channel.

They blared; millions of people were going to “suffer” from the current heatwave. The next headline, “US could set disaster record this year”, followed by 3 minutes of videos of every kind of natural disaster imaginable. They also promoted their series, “The race to save the planet.” Show me the weather and spare me the hysterics!

I had a major news organization as a client. Their mantra was, “If it bleeds, it leads”; meaning that blood, disasters and bad news was used for lead stories. Grab the attention of the reader/viewer; the more eyeballs they capture, the more they make in advertising revenue. Like it or not, hype sells!

Today we are overloaded with 200+ cable channels, 24-hour hysterical news bombarding viewers, broadcast and social media all clamoring for our attention.

In 2018 CNN health reported, “Too much bad news can make you sick”:

“With every news alert or breaking story, our world seems to be pushed further and further into crisis. It is taking a serious toll on our environment but also on our mental health.

In the past year, hurricanes battered communities around the globe, a monster earthquake wreaked havoc in Mexico, the American West erupted in flames and continues to burn, there have been more school shootings, and the Hawaiian volcano Kilauea is pouring lava into the Pacific Ocean, threatening the lives and homes of residents.”

“Our brains are hardwired to process stress relating to trauma by entering what is known as “fight, flight, freeze” mode before returning to a restful state, explained Susanne Babbel, a psychotherapist specializing in trauma recovery. However, constant exposure to trauma can derail our ability to cope healthily and hinder our ability to return to a relaxed state.

Every time we experience or hear about a traumatic event, we go into stress mode. We might go numb or have an overactive fear response to the perceived threat. Our physiology is triggered to release stress hormones like cortisol and adrenaline,” Babbel said.

“Ideally, after the perceived threat is resolved, the body’s resting state of homeostasis should be regained. However, recurrent exposure to traumatic events means the body is undergoing this process far more frequently than ever, interrupting this restful recovery.

Over time, when we experience this process again and again, our adrenal glands can become fatigued. Adrenal fatigue can lead to being tired in the morning, lack of restful sleep, anxiety and depression, as well as a multitude of other symptoms,” Babbel said.

…. “Chronic levels of stress can have myriad physical manifestations such as headaches, muscle tension or pain, stomach problems, anxiety and sleep issues.

…. What is important is to pay attention to when you are overloaded, when you start to get stressed, when you feel numb and moody or irritated or feel other outward symptoms of a nervous system response. Whenever you feel like you’re ‘off,’ that is a signal. That is your signal that you need to stop.”

Turn off the TV!

Most people look at television as “entertainment”, a way to get our mind off the everyday problems. Whether it is the news networks, weather channel, or the now politicized sports broadcasts, many viewers are simply turning it off. Screw it, who needs the stress! Don’t let the media hype make you sick.

When old people talk about “the good old days” or a “simpler life”, much of it hinges on being able to relax, have fun and enjoy life to the fullest.

I define “comfortable retirement” as being able to enjoy a comfortable lifestyle and not constantly worrying about money. Earthquakes, viruses, riots and hurricanes are events and will eventually be handled.

Money concerns throughout your retirement is a constant. We’re regularly bombarded with negative economic news; with much of it politically motivated. Here are some samples from my reading stack this week:

Whether it is a riot, pandemic, weather event or major economic catastrophe, you do what you can to protect yourself from physical and emotional harm.

“Before becoming a gold and mining analyst I worked as a counselor for many years. …. My business did well, so I suppose I was relatively good at it, too.

I attributed my success to one factor in particular over the others. It’s a secret I carried throughout my career that more often than not led to a successful outcome.

There are lots of things that contribute to a healthy state of mind, but…there was one element that, once instilled in my client, I knew we had a great shot of being successful.

That attribute was hope. (Emphasis mine)

My specialty was vocational rehabilitation. The clients I worked with were permanently disabled, physically or mentally. They had been beaten down; their futures irrevocably altered. You could see it on their faces. But once we identified something they could do vocationally, hope set in. And that changed everything for them.

It was more than just being optimistic or putting on a brave face. The one thing these clients were really good at they could no longer do-but once they realized they had new opportunities true hope set in. And it made all the difference.”

I asked Jeff to define “hope”. What were they hoping for that came true?

“Dennis, my clients were permanently disabled, the result of an accident or some other misfortune. Many were scared, they did not want to be looked upon as invalids or helpless for the rest of their lives. Many were terrified of being dependent on family or the government for their survival.

Through vocational rehabilitation, we were able to give many of them a new lease on life. Not only could they earn money and become independent, it gave many of them a whole new self-image. And it all started by giving them real hope.”

Jeff’s response struck a chord with me. My grandson Justin was born with cerebral palsy. Throughout his childhood, the educational system put him in classes with the slow learners, dubbed handicapped kids. Justin isn’t dumb. He may have had to work harder than most, but he learned. And boy did he learn….

I took great pride when he was rolled in his wheelchair to get his college degree, and then his master’s. He’s now in his 30’s – a productive, self-reliant and confident young man. Counselors like Jeff make a difference.

Jeff and I discussed how pleased we are with the current gold and silver prices.

Baby Boomers are generally well past their peak earning years. It’s not surprising that a survey showed, “Older people fear running out of money more than they fear death.”

As Suzanne Babbel explained, constant worry and stress can affect your mental and physical health.

Despite the government printing trillions in fake money, record low interest rates, and a shaky stock market, our personal portfolio is currently up over 11% this year, due in great measure to the increase in metal prices. That is quite a feat when you factor in a large portion invested in low interest rate CD’s

Jo and I enjoy seeing the balance go up despite all the world’s problems going on around us.

Friend John Williams at Shadowstats July 30th newsletter (58 pages) reports the “Deepest ever GDP decline”, and shows us gold has outperformed the Dow for the last 20 years. 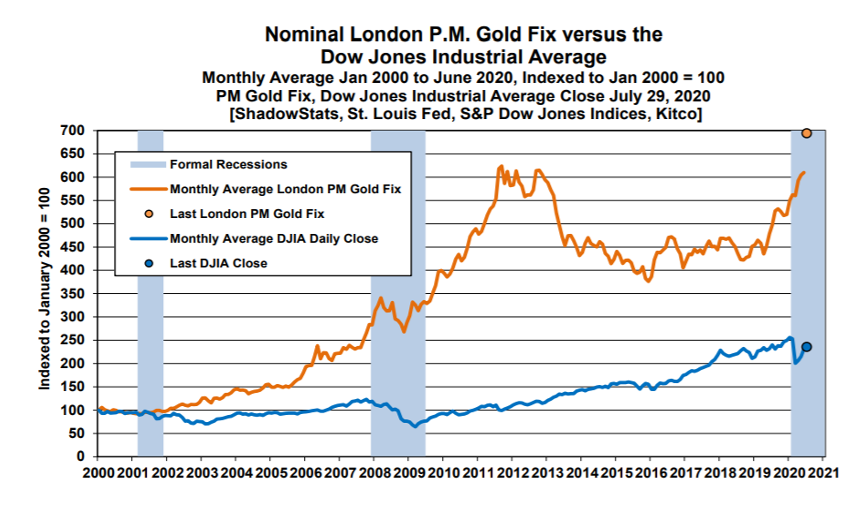 Pundit Bill Bonner recently asked, “Is this Peak Gold?” He doubts it, but I’m not too concerned.

Much like friend Chuck Butler says, “I hope things never get so bad that I have to sell my gold.” I’d much prefer to see the current issues go away and pass our holdings on to the next generation.

With Jeff’s help, I now understand why owning metals, and metals stocks has kept one retirement fear under control.

Don’t let things get you down

You are in control of your emotions. If you are watching TV, and feel your blood pressure rising, turn it off. Keeping your financial and emotional fears under control is healthy. You will sleep better and enjoy life!

I’m pleased the National Hockey League is in the Stanley Cup Playoffs – while keeping the political crap to a minimum. There is nothing more riveting, and exciting than playoff hockey.

Last week we watched the first game of the Tampa Bay – Columbus series. It went into the fifth sudden-death overtime before Tampa finally won. That’s 150+ minutes of hockey. It was a perfect example of what this week’s article was all about; Jo and I were totally engrossed in the game. 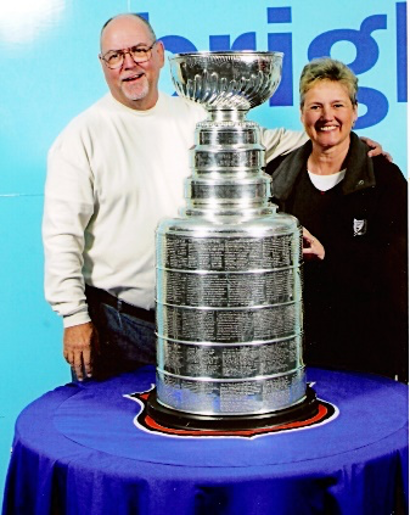 A hot goalie can carry the team to win the Stanley Cup. For the first two games Tampa out-shot Columbus by almost 50%, yet the series was tied.

We lived in Tampa in 2004 when they rode the back of goalie Nikolai Khabibulin to win the cup. Our hearts were pounding through game 7 when Tampa held on for a 2-1 win. Khabibulin made some breathtaking saves, stopping the last 16 Calgary shots.

We donated $10 to charity to have our photo taken with the cup. It’s pretty cool seeing the names of your favorite team inscribed on the trophy.

Friend, and former teacher, Linda H. reminds us that English is hard.

Before my cancer I couldn’t imagine deserting any dessert…