Our economic mess is a ginormous fur ball 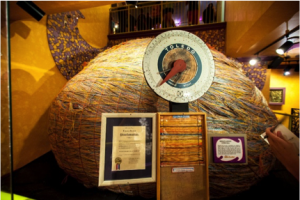 Assuming no reader would want a graphic of a fur ball I looked for a large ball of twine. I discovered friendly competition with several locations claiming the prize for the biggest in the world.

Regardless of the winner, the governments and central banks of the world have created a ginormous fur ball that would make this ball of twine look like a “tiny bb” compared to a giant beach ball.

Let’s take the enormity of government debt. The US Debt Clock tells us the government debt is currently over $19 trillion. It’s expected to top $20 trillion by the end of the year.

I googled “How long is a trillion seconds?” If the government paid down the debt at the rate of $1 per second, it would take approximately 31,709 years to pay off $1 trillion. $20 trillion would take 634,180 years. That’s probably what they mean when they talk about burdening future generations with our current debt. By then the sun may be turned off and we will probably be back to the ice age.

What is a problem?

In my former life I taught problem solving. We defined a problem as, “a deviation from the norm we no longer wish to exist”. Today things like zero or negative interest rates, deficit government spending, or banks taking reckless risks have become the norm.

Many of today’s problems are caused by past mistakes – governments trying to apply a short-term fix resulting in a much larger problem with terrible adverse consequences. Bailing out the banks “too big to fail” has negatively impacted the retirement hopes of several generations. Today I would define a problem as “A situation we no longer wish to exist.” (Even if it might be the norm.)

How do you solve the problem?

A single problem is generally easy – find the cause and apply the remedy. If you get a blister on your foot when wearing a certain pair of shoes, stop wearing them.

Life is not so simple today. The world’s financial problems are ginormous, even more tightly interwoven than the ball of twine above. The technical term for a highly complicated situation is a “mess”.

To effectively solve a mess (series of interrelated problems) you have to break things down to components, determine the underlying cause (s). Next, develop a solution that does not have adverse consequences as a result – you don’t want your solution causing a bigger problem down the road. It may require undoing things from the past.

Oh what a tangled web we weave

When things get complicated the problem solver must sort through the mess to determine the “true underlying cause” and differentiate it from symptoms. Treating a pain in your side with Novocain might relieve things temporarily, until your appendix bursts and you die from the infection.

Let’s take one example and walk it back to see just how complicated things become. Retirement plans today are suffering from lack of income from safe, fixed income investments. We no longer wish this to exist. Retirees long for the 6% Certificates of Deposit and 7% safe bonds of a decade ago.

What is the cause of the problem? It blossomed when the government passed the Troubled Asset Relief Program (TARP) bailing out the banks with our tax dollars. The banks no longer needed to compete for money and interest rates went to virtually zero.

Could the cause be allowing banks to get too large? We now have a fork in the road.

In the wake of the Great Depression, the government passed the Glass-Steagall act, separating investment banks from consumer banking. In 1999 that law was overturned. The big banks gobbled up hundreds of smaller banks – creating banks now deemed “too big to fail”.

Might the true underlying cause be a 1977 law, The Community Reinvestment Act? The politicos used the law as a hammer to force the banks into making loans to people with poor credit, spurring a housing boom that eventually collapsed under the weight of toxic mortgages. That law has not been repealed and banks are still under government pressure to continue the process.

The plot thickened when the banks asked for relief. Lending to poor credit risks would put them out of business. Ironically, the day Countrymark Financial filed for bankruptcy, they received a congratulatory letter from the government for meeting their sub-prime lending goals.

Fannie Mae and Freddie Mac, (semi-government agencies) were allowed to buy these loans from the issuing banks. A Cato Institute Study tells us:

“During the height of the housing bubble, almost 40 percent of newly issued private-label subprime securities were purchased by Fannie Mae and Freddie Mac.”

So what is the underlying problem, and how should it be solved? Here are some examples of what is a very long list.

I could continue, but you get the point. It’s a complicated mess, and there is no quick easy fix.

I find the election cycle very sad. Politicians, with their never ending quest for power, use our tax dollars to buy votes. Each election cycle brings us new and creative ways; bailouts, debt forgiveness, free cell phones, welfare, you name it. Instead of long-term solutions, the problems continue to compound.

President Kennedy, at a White House dinner said, “This is perhaps the assembly of the most intelligence ever to gather at one time in the White House with the exception of when Thomas Jefferson dined alone.”

Thomas Jefferson was credited with the following quotations. We can’t say he didn’t warn us:

“We the People” allowed our political class and central bankers to create this fur ball and “We the People” need to fix it. Part of the challenge is there are now millions who are profiting from the mess and don’t want it fixed. I hope it does not tear our union apart.

If you have ever seen a cat cough up a fur ball, it’s not a pretty sight. Neither is fixing our economic mess. It won’t be pretty but one way or another, it will have to get done. So far I have not seen any Thomas Jefferson appear on the horizon.

I tip my hat to the Cubs organ player, Gary Pressy. Last week he led the singing of “Take me out to the Ball Game” for the 7th inning stretch. They were honoring him for his 2400th consecutive game sitting behind the keyboard. He has not missed a game in almost 30 years. While I doubt they keep records, if they did it’s unlikely his record would ever be broken.

Last week I had the privilege of being interviewed by David Holland on his radio show. We discussed my recent article, “I Don’t have time to plan – I’m too busy!” David does a good job and I enjoy being on his show.

I’ve had readers ask what they can do to help build up our readership so we can continue on with this site and keep it FREE. One way is to forward columns to friends encouraging them to sign up – it is FREE. My wife Jo said, “If each reader would do that and get one sign up, our list size would double.” Never looked at it that way; that would be wonderful!

Also, interviews like David’s radio show help bring new readers into the fold. I have had a couple of interviews where kind readers have forwarded an article to the host suggesting they might want to interview me. Please feel free to do so, it helps and I sure appreciate it.

Let’s close with some clever tidbits courtesy of my friend Bob D.

And in keeping with the season: