An Economic Showdown is Looming 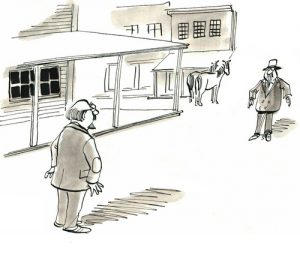 The Keynesians and the Capitalists are heading for an economic showdown at the O.K. Corral.

Keynesians believe the central government should control the economic levers affecting the masses. The economy can’t be entirely left up to the free market. Big government believers want the “leaders” determining the winners and losers. Controlling reallocation of wealth preserves the power of the political class. Using tax dollars to garner votes has turned into an art form.

George Bernard Shaw said, “A government that robs Peter to pay Paul can always depend on the support of Paul.”

US Governmentspending.com “guesstimates” 2017 spending on welfare and Medicaid will top $1.127 trillion. While the welfare class grows, Peter is working his butt off and sees a lot of his hard earned money wasted.

Many felt the elections in Britain (Brexit) and the US were similar, a major pushback against a powerful, controlling central governments. Margaret Thatcher reminds us, “The problem with socialism is that you eventually run out of other people’s money.”

A new sheriff in town

Political cartoonists depicted President Trump as the new sheriff. “Establishment” politicians (from both parties), government workers, and liberal media are not going to give up their power without a fight. The media onslaught leading up to the election will be tame as compared to what lies ahead.

I spent time with the late Jack Kemp, a firm believer in capitalism and “supply side economics.” The premise is simple; the government cuts personal and corporate taxes and also spending. It takes a couple of years to see the effects; but the economy picks up and government tax revenue increases due to the booming economy.

When President Reagan cut taxes, Mr. Kemp was adamant that the socialists feared it would work. They screamed, “Tax Cuts for the Rich” and pointed to increasing budget deficits. The democrat-controlled congress would not curtail domestic spending; they could not let the Reagan plan work.

“The economy recovered out of, what was then, the worst recession since the Great Depression.

However, Reagan also increased federal spending on defense at the same time. He doubled the national debt while he was in office. According to Keynesians, this would have also boosted economic growth by putting more money into the economy, creating jobs and increasing demand.”

The Federal Reserve is a powerful player. The Fed has a symbiotic relationship with government. The Fed finances deficit spending while the government protects them. In 2016 senate democrats blocked legislation to audit the fed.

When the Fed waited until after the election to raise interest rates Donald Trump claimed they were playing politics. Fed chair Janet Yellen responded, “I can say, emphatically that partisan politics plays no role in our decisions about the appropriate stance of monetary policy.”

Bloomberg chimes in about the non-political fed:

“… Current policy makers may be keen to hammer out their strategy for another reason: Trump is expected to appoint a new leader at the Fed when Janet Yellen’s term as chair expires in February 2018.”

Business Insider reports, “In its unanimous decision, the Federal Open Markets Committee noted improvement in the jobs market and the drop in the unemployment rate to a prerecession low.” Three rate hikes are expected in 2017.

“The Committee is maintaining its existing policy of reinvesting principal payments from its holdings of agency debt and agency mortgage-backed securities and of rolling over maturing Treasury securities at auction, and it anticipates doing so until normalization of the level of the federal funds rate is well under way.”

I was surprised when a month later, Chuck Butler reported in the Daily Pfennig:

What changed in the last month? A new sheriff in town!

If the fed doesn’t roll over their existing holdings, bond supplies increase dramatically, causing interest rates and the dollar to rise.

The media joins in

“Are debt scolds demanding that we slash spending and raise taxes right away? Actually, no: the economy is still weak, interest rates still low … and as a matter of macroeconomic prudence we should probably be running bigger, not smaller deficits in the medium term.

… So my message to the deficit scolds is this: yes, we may face some hard choices a couple of decades from now. But we might not, and in any case there aren’t any choices that must be made now.”

“… Eight years ago, with the economy in free fall, I wrote that we had entered an era of “depression economics,” in which the usual rules of economic policy no longer applied … deficit spending was essential to support the economy, and attempts to balance the budget would be destructive.

… But these predictions were always conditional, applying only to an economy far from full employment. That was the kind of economy President Obama inherited; but the Trump-Putin administration will, instead, come into power at a time when full employment has been more or less restored.” (Emphasis mine)

On October 22, 2016 the economy was “still weak”, and worrying about the deficit should not take place for a couple of decades. Less than 80 days later the economy magically changed and now deficits matter? What happened to the New York Times promise to “rededicate ourselves” to good journalism?

Is the economy better?

Jocelynn Smith highlights “A Wrench in the Recovery?

“…The fourth-quarter gross domestic product (GDP) grew only 1.9%, missing forecasts for growth of 2.2%.

While the number was largely in line with the average annual growth rate of 2.1% since the end of the recession in mid-2009, it remains the weakest average rate since 1949.

The so-called recovery following the Great Recession has been anything but impressive.”

The strategy is clear.

The establishment narrative – all is well, deficits matter, and raising interest rates is in the cards.

The Fed provides the heavy artillery. Raising interest rates quickly will hurt exports, put a huge drag on economic growth and cause a collapse in the bond market. The new sheriff will be blamed.

Investors take heed! What few bonds I hold, I’ll keep until maturity. Bond traders and funds will learn how bad collateral damage can be. Keep your stop losses current!

The battle lines are drawn

The hot Arizona sun rises over O.K. Corral. Janet Yellen and her Fed Gang have begun the battle. Standing behind them is the liberal media firing away.

With the sun at their back shining into the eyes of the world, the media will blare, “Tax Cuts for the rich and greedy corporations. Deficits matter, capitalism doesn’t work”. Expect regular doses of bleeding hearts wailing over proposed spending cuts. They must destroy the capitalist agenda.

Is the capitalist challenger up to the task? The Trump gang is hard-working people tired of seeing their money wasted by politicians beholden to their political donors. Who are these people?

Five Thirty Eight tells us, Education, Not Income, Predicted Who Would Vote For Trump. The Washington Post ridicules Trump supporters:

“The red hats have multiplied. …There are 18, 20, a whole sea of them. … There are only three college guys in Trump hats, but you see them everywhere you look. They are taking a selfie.”

Is it possible to reduce the size and power of the federal government? Congressional term limits perhaps? Will Congress really audit the Fed and reveal deceitful behavior? Will tax cuts and new jobs be enough to overcome the overwhelming negative media onslaught?

Economically President Trump can do everything right and still be run out of town like Jimmy Carter. The battle is on for the hearts and minds of the American public. Who will prevail? The outcome will set the direction of our country for decades.

If you visit southern Arizona, I encourage you to stop in Tombstone. O.K. Corral offers daily reenactments of the famous gunfight. Wyatt Earp, Doc Holliday, Virgil and Morgan Earp fought the McLaurys and Clantons.

The losers end up in Boot Hill Cemetery, another must see. Some of the gravestones have hilarious inscriptions. I took both of these photos a few years ago.

Our grandchildren are coming in late March and Tombstone is on the agenda. I realize I sound like the Chamber of Commerce, but I promise it is a fun visit you will never forget.

I saw this quote recently and loved it:

“You can easily judge the character of a man by how he treats those who can do nothing for him.” – Malcolm S. Forbes