Failing To Check A Simple Box Can Destroy Your Retirement Dreams 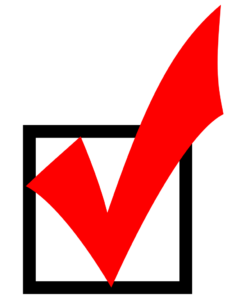 Bob and Ray were close friends; both retired and lived across the street from one another. One fateful morning, each took their coffee into the den, flipped on the computer and checked their brokerage account.

As the data popped up, they both did a double take…. “What the heck is going on?” Overnight their lives changed dramatically!

Like TV mysteries, this week’s episode is based on real-life events, although names are changed, and math is simplified.

Bob & Ray both worked hard, raised wonderful families, lived within their means, saved their money, and retired 3 years earlier. Each had a retirement portfolio of $1.2 million.

They self-managed their money conservatively using an online brokerage firm. No more chasing rainbows, preservation of capital and safe, secure income was their mantra. Each had enough guaranteed income to supplement their social security and pay their bills with money left over.

No money worries – their finances were under control. As long as they kept following their plan, they were financially set for life.

Each invested $1 million in safe, top quality bonds. They laddered them over ten years and averaged 6% return. The remainder was split between stocks and a money market account paying 4%.

Bob’s brokerage account showed that there was no change in his investments; however, the market value of his bond holdings skyrocketed. He could sell his bonds for more than twice what he paid for them. His portfolio jumped from $1.2 million to well over $2 million – overnight.

Ray’s brokerage account did not change in value. However, he discovered he had over a $1 million in cash. His bonds had been redeemed. Much like paying off a mortgage early, the borrowers paid off their bonds.

Ray quickly went to the bond screen and was shocked to find the best yield he could find for quality bonds was around 2%. His “guaranteed interest income” from his bond holdings of $60,000 annually could not be replaced. If he wanted to invest in quality bonds, he could earn around $20,000, not enough to pay his bills.

How did this happen?

Both used the tools provided by their online brokers. They used similar criteria in picking their fixed income investments, focusing on safety, yield and maturity date. What did they do differently?

Below is a screenshot from my Schwab account. I’m able to search through types of bonds, maturity dates, and ratings. Once the search criteria is entered, available candidates and their interest rates appear on the screen.

Ray overlooked the boxes under the “Include Only” tab. He did not check any boxes. 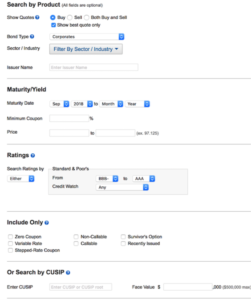 What does that mean?

When a borrower offers a Bond or Certificate of Deposit (CD) to the public, they outline the terms and conditions.

Non-callable means they cannot be “called in” early by the borrower for any reason. They will continue to pay interest until maturity.

Some have “conditionally callable” terms, limiting the situations where they can call in their bonds and pay them off early.

Callable is similar to a homeowner who has the option to pay off the mortgage early without penalty.

Good friend Chuck Butler explains the difference between callable and non-callable as CONTROL. If you own a non-callable CD or bond, you have CONTROL. You can choose to hold it until maturity or sell it in the aftermarket.

Ray’s choices. All of Ray’s bonds were callable. When the Fed bailed out the banks with their Zero Interest Rate Policy (ZIRP), it impacted the bond market. Companies refinanced their debt at much lower interest rates.

Ray didn’t lose a dime, his money was returned; however, the safe, fixed income options available to him paid a fraction of what they did just a few days earlier.

Ray faced very uncomfortable choices. He used to say he could live off the interest and never have to touch the principal. Not anymore! Now, in order to pay his bills, each month he has to dip into the principal to make up the shortfall.

He met with a financial advisor. If he and his wife tightened their financial belts, sold a car and their vacation home, the projections showed they would run out of money around age 110. Frightening, but not dire circumstances.

Bob’s choices. Bob’s choices were different, and not easy. His bonds were “NON-callable”; he would continue receiving 6% interest until maturity even though the current rates were around 2%.

Should he want to sell them, they would fetch more than $2 million, double what he paid for them.

Once the bonds were gone, he could not replace them with anything close to the interest he was currently earning. The non-callable feature offered him a nice windfall and time to think things through.

Should Bob sell at a nice profit or hold them to maturity?

When they ran the numbers, it went off the chart. They would not run out of money until somewhere past age 125.

Bob and his planner built a hybrid plan, selling some of the bonds for nice profits, and holding others until maturity.

Bob and Ray are doing fine, even though they don’t like the idea of seeing their investment portfolio go down each year. They adjusted financially and emotionally and continue to hope for good health.

There are some visible changes. Bob still has his vacation home, Ray doesn’t. Bob and his wife will fly, where Ray and his wife may drive to save money. Some of their extravagances have gone away, but their needs are looked after.

Both are concerned about the future; their margin for error is smaller, costs are rising, and social security is not keeping up with inflation. They’re fearful of what the government might do in the next crisis!

Interest rates are rising, what should we do now?

Two subscriber/friends (Phil C. and Rick G.) asked if it might be time to take some risk capital off the table and go back to safe, fixed income investments.

If you are thinking about moving money back to safe, fixed income investments, let’s not repeat the mistakes of the past.

Some feel the Fed is raising rates to have some wiggle room when the next crisis hits. If you are moving money back to safe, fixed income investments, do it right! You don’t want your holdings called in. Be like Bob!

Last week Jo and I attended a conference in Las Vegas. Good friend Rob Vrijhof gave an excellent presentation about how to bulletproof your portfolio. Rob is a senior partner with Weber Hartmann Vrijhof & Partners Ltd. located in Zurich. Rob’s daughter Jamie, now a member of the firm, joined him. If you are thinking about investing offshore, I suggest you check them out.

Much to our surprise, President Trump decided to visit Las Vegas while we were there. The crowds were huge, and we didn’t go anywhere near the convention center.

On Friday we broke for lunch and drove around the airport to see if we could see Air Force One. Not only did we see it, we watched the procession arrive and the plane take off.

I wish I could have a better photo, this was taken on my phone from across the street – (security would not let us by the fence) and the plane was rolling down the runway.

I chuckled to myself. At one time I had a small plane. The common air traffic control command is, “Taxi to the runway and hold”. They would issue clearance to go to the active runway, followed by “cleared for takeoff”. Air Force One never stopped rolling, it taxed to the runway and off it went.

Neither of us had ever seen the plane before. It is pretty exciting. I wish the “United States of America” on the side had shown up better in the photo.

One last tribute to Burt Reynolds… 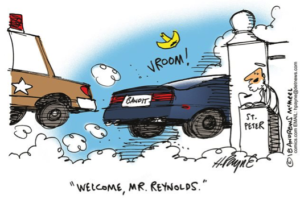