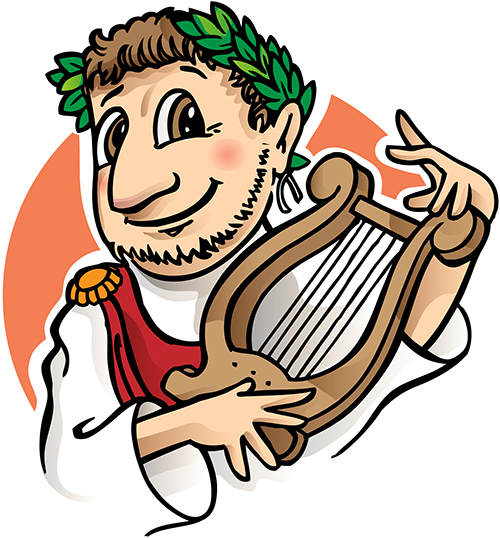 Since the repeal of the Glass-Steagall Act in 1999, the role of the Federal Reserve has changed. The Fed used to be owned by banks while high-risk investment houses were separated and not considered part of the banking system.

Since the repeal, banks have consolidated where the top four banks now account for 50% of all US Banking assets. In addition, they have merged with high-risk investment houses and become casino banks.

What has (hasn’t) changed?

“Gentlemen! I too have been a close observer of the doing of the Bank of the United States. I have had men watching you for a long time and am convinced that you have used the funds of the bank to speculate in the breadstuffs of the country. When you won, you divided the profits amongst you, and when you lost, you charged it to the bank. You tell me that if I take the deposits from the bank and annul its charter, I shall ruin ten thousand families. That may be true gentlemen, but that is your sin! Should I let you go on, you will ruin fifty thousand families, and that would be my sin! You are a den of vipers and thieves, I have determined to rout you out, and by the Eternal God, (bringing fist down on the table) I will rout you out!”

During the Great Depression, the government finally reigned in the banks and passed the Glass-Steagall act, protecting taxpayers and depositors from banks making investment mistakes with our money. The FDIC was designed to protect citizens from bank failure. No depositor has lost money since then.

Today the situation is reversed. These huge casino-banks own the Federal Reserve, and their risky operations are now being bailed out with our tax dollars under the guise of their bank charters.

Since Glass-Steagall was repealed, the mantra of the Fed’s master has changed. Within a decade the taxpayers subsidized their first big bailout, and the process continues. The banks make risky trillion-dollar bets, knowing the Fed (taxpayers) will cover their mistakes – while paying themselves huge bonuses.

In 2010 the Dodd-Frank bill was passed and has been ineffective. The Fed protects (subsidizes) the casino bank profits while breaking the law. No one is routing them out.

“At some point long before the credit markets seized up in 2007, financial markets collapsed and the economy plunged into the worst recession since the 1930s, the Federal Reserve forgot that it is the central bank for the people of the United States and not a private academy where decisions of great importance may be withheld from public scrutiny.”

“What the Fed has achieved so far:

2) Made the rich even richer

Since the 2008 bailout, we’ve seen Fed Chairs, Bernanke, Yellen and Powell talk a good game, but their behavior tells a different story. Their primary mission has been spending trillions to bail out (subsidize) their casino bank owners – all at the expense of Main Street.

Alex J. Pollock, tells us, “Since 2008, Monetary Policy Has Cost American Savers about $4 Trillion.” This reckless money printing brought us double digit inflation – which continues to rise. The American people are seeing their life savings shrink in buying power at the highest rate in over 40 years. Inflation is here, the public is on to their game. The Fed and congress keep fiddling…

In a recent Daily Pfennig, Chuck Butler quotes John Dienner from Ruminations of the World Economy:

“The Fed printed more money in just one-month last year than the nation printed during its first 200 years. You may remember from high school physics class that for every action there is a reaction (Newton’s Third Law). That reaction might not be immediately observable but there will always be a reaction. The reaction to the rapid expansion of the money supply can be described either as ‘price inflation’ or ‘dollar devaluation.’ …. Your money buys less than it did before the money printing.”

“Remember months ago, when I was waving my arms and yelling from the rooftops that this inflation that we were seeing was 1. Not transitory, and 2. Not wage influenced, that it instead was a Money printing phenomenon? That’s exactly, what’s going on here folks…”

As consumers pay more for everything from groceries to gasoline, household income is failing to keep pace with a higher overall cost of living, according to recent reports.

But there’s a big difference between now and 1982. Now, the inflation index is spiking, and has been getting worse month after month; back in 1982, inflation was coming down. The last time inflation actually spiked like this on the way up and broke through the 7%-mark was in June 1978: 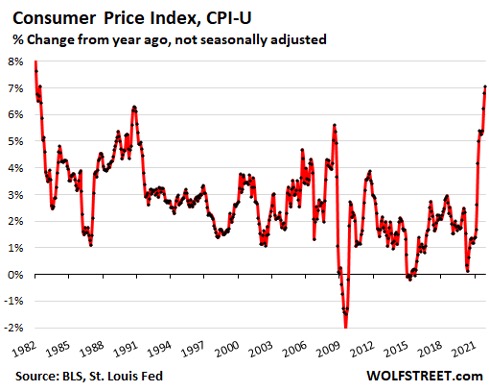 …. The effective federal funds rate (EFFR), which the Fed targets with its interest rate policy, is now at 0.08%. …. The inflation-adjusted or “real” EFFR is a negative 6.96%, the most negative “real” EFFR in the data going back to 1954, the hallmark of the most reckless Fed ever. 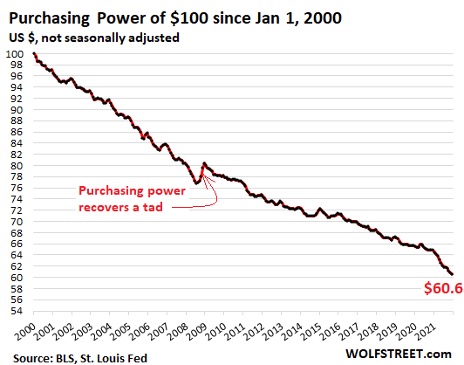 But so far, the Fed has refused to deal with this inflation. It is still repressing short-term interest rates to near 0%, and it’s still printing money in large amounts, though less than it did two months ago.”

“The Federal Reserve on Wednesday announced that it is accelerating its removal of monetary support for the economy, citing a rise in inflation that has seen the biggest jump in prices nearly 40 years. (Emphasis mine) In a move to cool growth, policy makers also said they expect to hike interest rates three times in 2022.

…. ‘The inflation that we got was not at all the inflation we were looking for,’ Fed Chairman Powell said.”

When Powell was questioned about inflation reaching Carter year highs, he told Congress:

“As we move through this year…if things develop as expected, we’ll be normalizing policy, meaning we’re going to end our asset purchases in March, meaning we’ll be raising rates over the course of the year.”

Let’s get this straight. Americans are going further in debt, prices are skyrocketing, and you keep yapping about it but do nothing? Why the hell are you not raising rates now? Fiddle…fiddle…fiddle…

“Our Fed/ Cabal/ Cartel is still sitting on their collective hands… I mean give me a break Powell! If you think, and have said, that inflation is a problem and that higher interest rates will be needed, but you’ve put the rate hike off until March, what gives? If rates need to go up, they need to go up now! You, fumbling, bumbling, poor excuse of a Central Banker…

.… If we calculated inflation the way it used to be calculated before the hedonic adjustments were added in the 90’s, Inflation is really running at 15.2%, according to shadowstats.com…”

Mr. Powell knows he cannot serve two masters, the American people, and the casino banks. So far he has made his choice clear. Powell isn’t stupid, he just hopes we are.

Powell knows that even a small rate increase will negatively affect the stock and bond markets and his master’s profits. The “most reckless Fed ever” keeps fiddling while Main Street burns.

Congress also cannot serve two masters. Will congress reign in the Fed? While we can HOPE another Andrew Jackson or Ron Paul emerges and the Fed is brought under control, retirees must still protect their accumulated wealth.

Investors must protect themselves. Buy and hold assets that provide inflation protection. Many investors are doing that.

“Central banks around the world are increasing the gold they hold in foreign exchange reserves, bringing the total to a 31-year high in 2021.

…. The value of the dollar against gold has dropped sharply over the last decade as large-scale monetary relaxation has kept boosting the supply of the U.S. currency. Although the U.S. Federal Reserve is starting to tighten its grip on credit, other central banks continue their shift to gold, reflecting global concerns about the dollar-based monetary regime.” (Emphasis mine)

Throughout history gold has maintained its value while paper money becomes worthless. Owning physical metal and gold stocks are considered insurance, protecting you from the catastrophe of worthless paper money destroying your wealth. While the Fed may fiddle, investors can’t afford to sit idly by. Got gold? 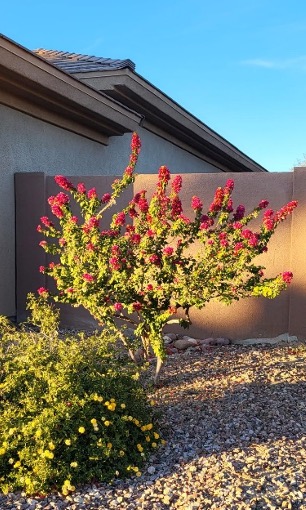 Jo and I are back in Arizona. It’s nice to come home in the middle of January to find days filled with sunshine, flowers in bloom, and waving to neighbors going for their daily walk.

Why is it the landscaper comes to trim bushes when they are in full bloom?

I don’t like cold weather, but was also very aware of the dark, overcast winter days. I Googled days of sunshine and learned Phoenix gets 300 days annually. Evansville, Indiana gets 204 days, while the total US gets 205. Phoenix gets around 50% more than the national average.

Unfortunately, the overcast days are lumped together in the northern climates. When you go a couple weeks without seeing the sun, people get grumpy….and vice-versa. When the sun comes out moods seem to elevate.

After a few days to catch our breath, we were back to reality dealing with health issues. If all goes as planned, we are hoping to return to a more normal life in the next few days.

Quotes of the week…

“Gold has worked down from Alexander’s time. When something holds good for two thousand years, I do not believe it can be so because of prejudice or mistaken theory.” — Bernard M. Baruch

“The superiority of the gold standard consists in the fact that the value of gold develops independent of political actions.” — Ludwig von Mises

Friend Ken H. supplies some puns for this week: