The Fed is Playing, “Pin The Tale On The Elephant!” 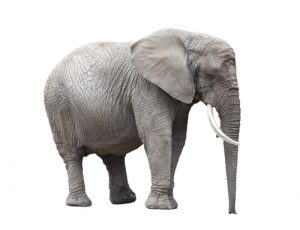 The Federal Reserve’s Zero Interest Rate experiment saved the banks and destroyed the retirement plans of many generations. Now they want to “normalize” things. Their solutions are ill timed and risky!

When things collapse, President Trump will become a combination of Herbert Hoover and Jimmy Carter – blamed for the catastrophe. Democrats will be cheering, “Pin the tale on the Elephant!” Republicans will be scattering like dandelion seeds in a tornado.

The Troubled Assets Relief Program (TARP) was sold as an emergency one-time bailout and interest rates would quickly return to normal. One-time and quickly didn’t happen. Instead, there was more bailout money (Quantitative Easing), the Fed bought approximately $4 trillion in US government securities and mortgage backed debt, and interest rates have been at historic lows for over eight years.

Did the bailouts work?

The banks report profits and pay nice bonuses to their executives. Is the problem of banks being, “too big to fail” solved?

… “The goal to end too big to fail and protect the American taxpayer by ending bailouts remains just that: only a goal”, (Emphasis mine) Thomas Hoenig, vice chairman of the FDIC, said in a statement.”

“(T)he president of the Federal Reserve Bank of New York, William C. Dudley, said there had been much progress in making the financial system “less prone to panics.”

“Still,” he said in prepared remarks, there is more to do before we can say that we have ended ‘too big to fail.’ This is work that we absolutely must complete.”

Has the economy returned to normal?

The Fed raised rates .25% in December 2015. They held off additional increases until December 2016, after the election.

Now, it’s fair to say, the economy is near maximum employment and inflation is moving toward our goal.”

The Minutes of the Federal Open Market Committee meeting in March 2017 adds:

“Nearly all participants judged that the U.S. economy was operating at or near maximum employment.

… Job gains had remained solid, and the unemployment rate had changed little in recent months.”

We don’t need a decoder ring to understand the Fed’s message, “Bush broke it, Obama fixed it and Trump inherited an economy with a clean bill of health. Anything bad that happens can be pinned on the new president!”

The Fed raised rates again in March and signaled more to come this year. They will continue to roll over their existing debt holdings (approximately $2.5 trillion in Treasuries and $1.75 trillion in Mortgage Backed Securities) until “normalization of the federal funds rate is well under way.”

When is “normalization?” Reuters polled the top banks and concludes:

“Five of 15 primary dealers … expected the Fed to start paring reinvestments by year end, while the rest forecast the central bank would do so by the end of the second quarter of 2018.

The median view of 11 dealers was for the Fed to eventually shrink its balance sheet to $2.75 trillion.”

In addition to the government financing their normal borrowing, one-third of the respondents believe the market will soon begin to absorb an additional $1.2 trillion in debt. Reducing their debt holdings has the same effect on the credit markets as a rate increase.

Is the economy as rosy as the Fed tells us?

The Federal Reserve Bank of Atlanta issued their weekly GDP forecast. Note the continued downward revisions from almost 3.5% to .5%. 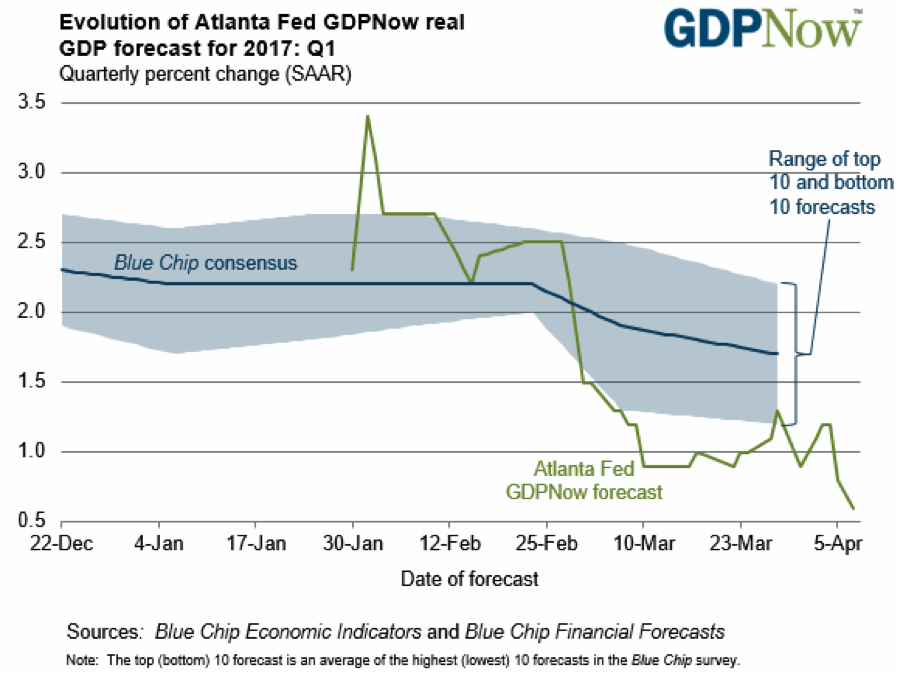 If the Fed continues to raise rates, can it harm the economy, the job market and retirement plans?

In the recent WHVP Market Outlook, friend Rob Vrijhof gets right to the point:

…We should not forget that the US economy has outperformed the rest of the western world and with a slowdown of the economy, interest rate hikes would be poison.”
(Emphasis mine)

Renowned economist, Dr. Lacy Hunt and Van R. Hoisington publish a FREE Quarterly Review & Outlook (A must read.) I love the fact they are economists who call it like they see it with no political motivation. Here is what they say about the current Fed policies:

“To judge the success or failure of monetary or any other type of policy action, one must analyze in terms of the economic conditions under which the measures are being implemented. … Viewed from this perspective, the Fed’s current tightening is highly risk-prone for the economy. (Emphasis mine)

…Indeed, all of the key monetary variables that are heavily influenced by Fed policy operations deteriorated in the first quarter. Despite the lowest annual economic growth rate of this expansion and the second straight year of declining growth, no fiscal stimulus is expected for 2017. … How can the U.S. economy surge ahead this year with this additional restraint?” (Emphasis mine)

The publication has an excellent write-up about American Sociologist, Robert K. Merton (1920-2003) who originated the concept of “unintended consequences”, identifying problems that arise when policy makers implement theories of grand design. The Fed consists of Grand Wizards of Economic Theory (GWOET). The GWOET’s current policy is very high-risk.

The Fed minutes offers some clues. They are concerned about equity prices being high. Is this an “irrational exuberance” warning?

There are some positive feelings. “The Conference Board Consumer Confidence Index Increased Sharply in March”:

“Consumer confidence increased sharply in March to its highest level since December 2000 …Consumers feel current economic conditions have improved over the recent period, and their renewed optimism suggests the possibility of some upside to the prospects for economic growth in the coming months.”

While consumers may feel optimistic, many pundits have warned that the economy is not currently performing as well as the Fed wants us to believe.

“In effect, the Fed is saying to Wall Street: “Price in” a recession because we are! (Emphasis mine)

After all, our monetary central planners are not reluctantly allowing interest rates to lift off the zero bound because they have become converts to the cause of honest price discovery … Instead, they are merely storing up monetary ammo for the next downturn.” (Emphasis mine)

“Jeffrey Gundlach, chief executive officer at DoubleLine Capital, said … he expects the Federal Reserve to begin a campaign … of “old school” sequential interest rate hikes until “something breaks,” such as a U.S. recession.” (Emphasis mine)

So there you have it. Consumer confidence is high, the Fed is trumpeting, “happy days are here again”, while they are raising rates pushing the economy toward a recession.

The president is falling into the trap of emphasizing positive economic data since he took office. The Atlanta Fed and others are telling us storm clouds are on the horizon, and the Fed is ignoring the data.

When the eventual market correction comes, the financial effect on unprepared retirees and investors will be dramatic. The liberals will scream, “Pin the tale on the Elephant”. Once again, the emergency solution will be more government intervention, while investors continue to suffer.

For investors and retirees – it’s better to sell a year early, than one minute too late. There is never a bad time to take profits.

I hope everyone who celebrates had a Happy Easter. I was mesmerized by photos of our two great-grandchildren; all excited as they looked for Easter eggs. Great-grandchildren! Another reminder how quickly time flies.

Jo and I are excited that friends from five states (Ginny, Judy, Nancy, Carol, Tom and Joan) will join us for lunch next Sunday. Six of us have been friends since first grade, four of us were confirmed together and seven of us are high school classmates. How lucky we are that the Internet miracle has made it so easy for us to stay in touch. I have some early grade school photos I plan on bringing. The smiles are the same, the hugs and laughs are genuine.

I’m excited to announce we have our first advertiser. I recently interviewed dividend and income expert Tim Plaehn, the editor of The Dividend Hunter, a publication I highly recommend. He’s offering a 50% discount on the first year’s subscription to Miller on the Money Readers. Click HERE to receive your discount.

My goal is to keep our website FREE. Readers who go through our link to advertisers and Amazon help us toward our goal. Thank you one and all!

One advantage of growing old is a different perspective. One graphic sums
it up well: 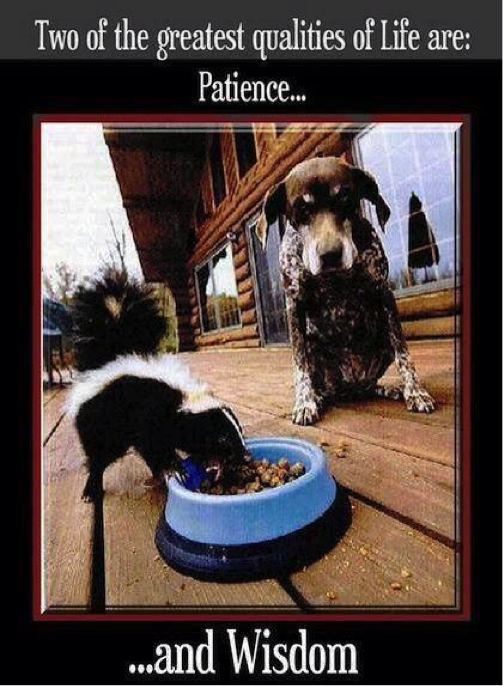