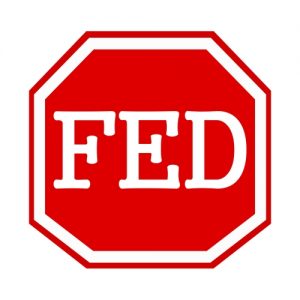 With a concerned look on his face, my friend John said, “A special assessment would be close to $5,000 per home.”

My wife Jo and I live in a Del Webb community in the Phoenix suburbs.

Our community is responsible for maintaining our own roads. Here is the conversation that followed:

John – “Most roads are expected to last 20 years, and we are in year 17. We don’t have adequate reserves to do the necessary maintenance we expect in the next few years.”

Dennis – “When we bought our home in 2015 I was told our reserves were well funded, what happened?”

John – “A couple things. Previous homeowners boards, wanting to keep maintenance fees down, did not adequately fund the reserves. Advisors reassured us we had adequate reserves. Now, after changing advisors and a new study, we are told it is more like 35%.”

It hit me head on! I have been writing about underfunded pension plans, both public and private that are faced with similar circumstances. I blurted out, “The Federal Reserve Strikes Again!”

When the Fed bailed out the banks by dropping interest rates to historic lows, the consequences for seniors, savers and pension plans were catastrophic. Add another group to the list; any entity saving and investing money for anticipated future expenditures. Today their investment capital is earning a small fraction of what was projected in the past.

In 2008, the government (with a democrat congress and republican president) passed the first bank bailout bill, even though the majority of Americans opposed it. Citizens are still feeling the effects of that decision.

Bill Bonner, one of my favorite writers, gets right to the point. I chuckled when I saw the title of this one: “Will the Fed Stab Investors in the Back?” They have been doing so regularly since the Fed was established, what I want to know is will they ever stop?

Here are some snippets under his byline, “Off the Rails”:

While I agree with Mr. Bonner, the Deep State deserves it, somehow the banks and politicos get saved and the people end up bearing the cost.

“Income inequality, or the hollowing out of the middle class, has been seen in both the short-term and in the years going back before the financial crisis and the Great Recession.”

If you have not signed up for the Hoisington Investment Management Quarterly Review & Outlook, I recommend you do so. It’s free and unlike anything else you will find on the Internet. Co-author, Dr. Lacy Hunt is a friend and one of the few economists that can discuss economics in terms I can understand. In the most recent issue, they weigh in on the issue of the Fed, government and economy.

“The worst economic recovery of the post-war period will continue to be restrained by a consumer sector burdened by paltry income growth, a low and falling saving rate and an increasingly restrictive Federal Reserve policy.

…Interestingly, without the drawdown in the saving rate, real consumer spending over the past two years would have been reduced by more than half. Considering the slow and declining rate of growth in income as well as the low saving rate, it appears that the current spending level cannot be sustained. (Emphasis mine)

Thanks to the government bank bailouts, most retirees (who do not have a solid pension) can no longer “live off the interest” and are faced with having to tap into the principle in order to pay their bills.

We have seen many articles like this from MarketWatch that conclude:

“Older Americans’ No. 1 fear about their retirement is that they won’t have enough money to afford retirement …their greatest fear about retirement was outliving their savings and investments…”

I contacted Lacy, asking about the reduction in savings, particularly as it related to retirees. He did not mince words:

“Households are living well beyond their means in order to try to achieve a higher standard of living that the US economy was traditionally, but no longer is, able to produce.”

Can we look to the government for help?

I recently wrote about the looming budget battle, wondering if proposed tax cuts would be offset with meaningful spending cuts. The Hoisington report has this to say:

“Negative existing federal fiscal conditions strongly suggest that any benefit of the proposed debt-financed tax cut (Emphasis mine) is likely to be very muted, if it is positive at all.”

While the politicos will tell us they are helping the middle class, it’s unlikely to happen. They have their own agenda, pandering to the banks and welfare class in order to maintain their political power. It’s nothing new; it’s been that way for centuries. 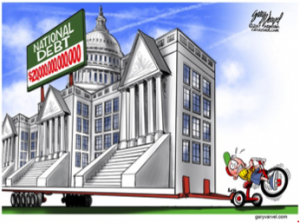 How many future generations will bear the brunt of our current out of control government spending before they revolt? Our children and grandchildren are committed to funding promises that are impossible to keep. Their futures have been mortgaged before many of them were even old enough to vote!

Unlike the government, individual citizens must live within their means. If your retirement income projections cannot be met, or expenses are higher than anticipated; sooner, rather than later, you should make adjustments.

You may choose to work longer and earn money and/or reduce spending and change your lifestyle. Some may choose to draw down from savings each month and hope they don’t run out of money before they die.

Control what you can

While there is little individuals can do to reign in the government, the current budget has one controversial provision that is already being politicized. Money’s article “How Trump’s Tax Plan Targets Blue State Voters” tells us:

“Eliminating that loophole (the deduction for state and local taxes) could bring in $63 billion a year, yielding more than $600 billion over the next decade.

So just how dramatic is it? …. Taxpayers in just four deep blue states – California, New York, New Jersey, and Illinois – reaped nearly 44% of total benefit from the deduction. That means those four states pick up the lion’s share of the tab if the deduction were eliminated.”

While there will be a lot of whining on this issue, it brings about a simple question of fairness. Shouldn’t each state stand on it’s own?

We should be thankful that we have competition among states and retirees have many choices.

Downsizing economically without a major change in lifestyle

In the Phoenix area we have many California refugees who sold their expensive home and moved to our area where their money goes further. Nice homes in our area are considered cheap as compared to California prices.

There are plenty of tools available to help with those choices.

The Tax Foundation has a report, “What is The Real Value of $100 in Your State?”. You can see why a lot of Californians are headed elsewhere: 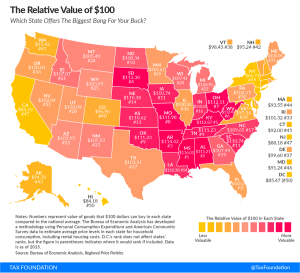 They also produced a report regarding State-Local Tax Burdens by State. California has the second highest tax burden. 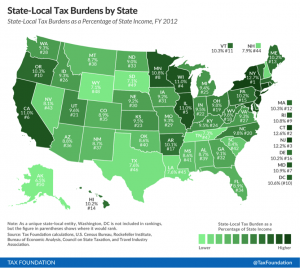 GO Banking Rates produced another valuable tool, “How Long $1 million Will Last in Retirement in Every State”. $1 million will last, “Anywhere between 12 and 26 years, depending on the state.” 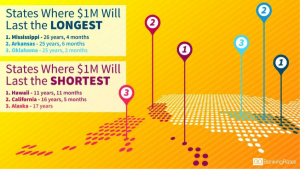 The Social Security Administration tells us:

All retirees want their money to last for the duration – with room to spare. Many retirees, worried about running out of money before they die, are voting with their feet and moving. Better to err on the side of caution, you could be one of the 10% and live past 95.

It’s very possible to downsize economically, without radically affecting your lifestyle. Retirees want to enjoy their golden years not having to constantly worry about money. A great stress reducer is learning to be thankful and comfortable with what you have. Screw the Fed and enjoy what time you have left! 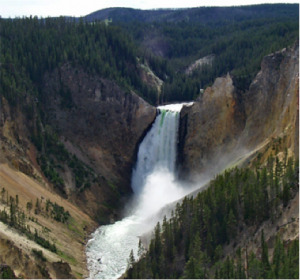 If you have never been to Yellowstone Park, I’d recommend you add it to your bucket list.

While it is famous for the geyser, some of our favorite memories are of Yellowstone Falls. It begins at Yellowstone Lake and forms the Yellowstone River, which flowed north right beside our campground.

There is an observation deck at the top of the falls and the roar of the water pouring out of the lake is amazing.

Jo and I lived full time in a motor home for a little over a year. We sold our home, put our belongings in storage and took off driving. It was one of the most exciting years of our life. The drive to Yellowstone Park is one of the most beautiful trips we ever experienced. 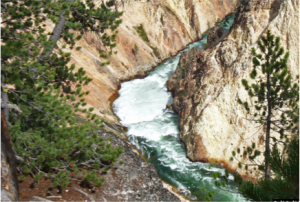 We were there in mid-August and the water was still very cold. Our motorhome was backed in about 20 yards from the moving water. At night it was fun sitting outside looking at the twinkling stars in the big sky and listening to the water flowing in the river.

When we left Yellowstone, we headed directly east and drove across the top of the United States to Sault Ste. Marie, Michigan. From there we headed south back to Florida. It truly was, “From the mountains, to the prairies, to the ocean white with foam!”

Jo will supply this week’s smile with a couple things she showed me this week.

A sign at a bakery said, “Fat people are harder to kidnap. Come on in and have a piece of cake!”

My favorite … an elderly gentleman went to the doctor and said, “My leg aches all the time.” “That’s just old age”, replied the doctor. The gentleman replied, “Well my other leg is the same age and it doesn’t hurt.”