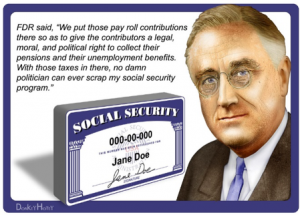 When it comes to true social security reform, forget about it. The politicos will never fix the real cause of the problem.

If the Republican party tried to right the social security ship, the democrats and liberal media would roast them and they would be drummed out of office. On the other side, we hear candidates espousing more giveaway programs, including social security, with no concern about how to pay for it.

Google “social security” and you will find many pundits offering ideas to fix the program. They all propose various ways of raising taxes, moving the retirement age back, means-testing benefits, adjusting the cost of living formula and raising taxes on benefits.

It’s a joke! If congress passed meaningful social security reform, it would look good on paper, but not solve the problem.

This Wolf Street article outlines raising the debt ceiling, increasing budget deficits and who is buying our ever-increasing debt.

Here is what grabbed my attention:

“US government entities bought $173 billion in Treasury securities over the 12 months, bringing their total holdings to $5.9 trillion by the end of September. These Treasury securities (“debt held internally”) are held by the Social Security Trust Fund and government pension funds and belong to the beneficiaries of those funds.” (Emphasis mine)

That is like an individual making a contribution to their 401k, borrowing it back out and spending it. Technically they have an IOU in their 401k, but I doubt many would sleep well at night thinking their retirement dreams will come true.

Harry Browne was spot on:

The money is gone! The trust fund is full of government IOU’s – political promises.

The US Debt clock presents a different picture:

The IOUs in the trust fund are now over $20 trillion; shown as “social security liability”. Social Security (a politician’s promise) is now included in US unfunded liabilities.

It gets worse. Social security tax receipts no longer cover the benefits paid – cash flow is negative. Peter G. Peterson Foundation shows us the trend, concluding the “theoretical” the trust fund will be depleted in 2035, around 15 years away: 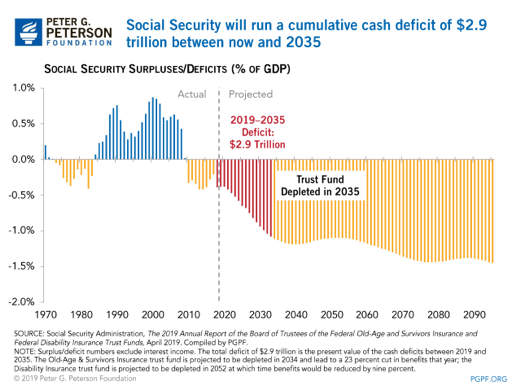 The political charade is very clear. Congress will borrow almost $3 trillion on top of all other spending, to make up the shortfall in social security taxes collected and pay benefits. Politicians have ignored this inconvenient truth for years.

Hank Johnson wrote in the Huffington Post, “Social Security is not just another government spending program. It is a promise from generation to generation.”

Larry Elder tells us, “According to the Social Security Administration, in 1945, 41.9 workers supported each individual retiree, while today only 3.3 workers support each retiree. This system cannot continue.”

FDR and Hank Johnson were mistaken. What about the “generational promise?’ The damn politicians not only saddled future generations with impossible debts to pay, but they also destroyed any hope for their own retirement.

Perhaps some future Congress will pass social security reform – however, it will NOT solve the problem.

Cutting spending and balancing the budget is not in a politician’s DNA. Both political parties pay no attention to the deficit.

It’s time we quit kidding ourselves, and deal with things we can control.

Rachel Greszler writes, “What Social Security’s Shortfall Means For You”:

But what does this year’s 2019 Trustees Report…mean for current workers and retirees?

But it’s not just younger workers who will receive benefit cuts. Consider people who are retiring in 2019 at age 62: Benefit cuts will kick in for them at age 78.

Prepare for the worst and hope for the best.

Regardless of our age, we can’t depend on receiving social security benefits anywhere close to what the program calls for today.

Here are some highlights:

The article summarizes, “(This) proposal…is little more than an opening bid in a much larger conversation about entitlement reform (emphasis mine) in the coming year.”

Eventually benefits will be cut, cost of living adjustments reduced and taxes will go up. If you prepare for the worst and it isn’t as bad as you thought, that’s a good thing!

Saving for retirement is OUR responsibility. Those who hope to have and/or continue to enjoy a reasonable retirement must accept that fact. Make necessary adjustments NOW so you are never at the mercy of Big Brother.

Take full advantage of IRA and 401k programs. If you are not maximizing your contribution, build a plan to not only get you there but also take advantage of the “catch up” provisions. Get serious about truly saving, sacrificing some “wants” today to pay for “needs” in the future.

Continue adding gold to your savings. Only Gold provides historical gold prices. During the Carter years, gold almost tripled in value, appreciating well ahead of the inflation rate.

Accept the fact your social security check will not keep up with inflation. Eventually retirees will have to tap into savings to pay the bills.

Strive for “lifestyle certainty” – having enough money to pay the bills regardless of what happens in the markets, inflation increases or any other unexpected economic changes – without having to worry. Retirees can depend on the government to send them something, but they cannot depend on it to continue to pay all the bills it may have covered in the past.

Think before deciding to defer benefits. The government offers higher benefits to those who defer taking them when they are eligible.

A popular tool for financial planners is a program called “social security optimizer”. Beware! With a few limited exceptions, it is a gimmick and can cost you many thousands of dollars.

In one example, the computer spit out the recommendation and proclaimed it saved well over $100,000. What the report omits is dishonest. Whether you defer benefits or take them at the earliest possible time, the break-even point is around 80 years old. All the theoretical savings would not kick in until after the break-even point. Can you guarantee you and your spouse will live that long? If not, you would have been better off taking your benefits early.

How much do you trust the government not to change things? Can anyone guarantee congress will not change social security as it exists today in the next 10-20 years? Somewhere around 2035 they are going to be forced to do something.

If you want a full breakdown, check out our special report, “When Should I File For Social Security?”

There is a special section outlining how you can push the break-even point well past your normal life expectancy and truly maximize your benefits.

Eventually congress may trumpet a social security reform bill. It will be a tax increase coupled with a reduction of benefits, while they spend the money elsewhere. They will kick the can down the road and continue to burden future generations with promises that are fiscally unable to keep. They have done it before and will do it again.

Don’t be fooled. While you may not see a UFO, accept the fact the government will never fix the real cause of the social security problem. Congress will raise taxes and cut benefits whenever they can. Do what it takes to fund as much of your retirement as possible so you don’t have to depend on Big Brother. You will be glad you did.

Thank you to all the readers who dropped me a note in response to last week’s article about the bond market. Subscriber Rick G. shared this information:

“Your newsletter is correct! I just had an agency bond called. It wasn’t due until 2026. The Fidelity guy said agencies are issuing new bonds for 3-10 years or longer, then call them in about 3-6 months and then float more bonds. He said it was crazy.

ALL the bonds are now callable. What a mess.”

I fear things will get worse for bondholders.

Due to my summer cancer challenges, Jo and I have not seen our youngest grandchildren in a year. We are going to Indiana for Christmas earlier than normal. The boys are not toddlers anymore (15 & 10) but the love and bonding remain the same. We are very excited.

I’m sure I won’t have the energy of years past, and will take plenty of naps, but that is a small price to pay for being surrounded by loving family.

Jo sent me a link to a cool video, This local hardware store’s $130 commercial is being dubbed ‘the best Christmas ad of the year’. I love the ending.

I have been a registered independent my entire life and have little appreciation for the political class.

Subscriber Alex E. sent me a note and I thought I would share his humor: