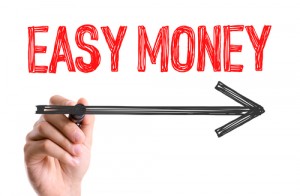 I believe in the old saying, “If it sounds too good to be true, it generally is”. Note the word “generally”; meaning there are a few exceptions to the rule. All too often “free money” is connected with someone hawking a product or service – not the case in today’s missive.

We had a large family gathering for Christmas this year. Not only did it include three generations, but also a young lady named Vicky, a foreign exchange student from Germany. She is a delightful young lady and we really enjoyed her company.

She told us two major differences she noticed is Americans sure know how to eat; and their amount of gift giving is much more than she has ever experienced. She enjoyed opening a gift from our family – grandparents, cousins and friends. It looked to me like it was totally unexpected. Vicky probably weighs 100# and was surrounded by a family with several people well over 6 feet tall and 200#. Yeah, I guess we do feast well; particularly at holiday time.

What struck me though was her remarks about gift giving. After Santa Claus arrived, and all the gifts were exchanged we had several trash bags crammed full of torn wrapping paper; presents were piled up everywhere. Some of the toys for the grandchildren cost well over $100 – which was around a week’s pay when my children were small. I found myself thinking about what Vicky said. When I was a child you asked Santa for one gift and that was it. The other gifts were generally school clothes and practical items, not toys. When and why did it change?

In the early 1960’s the only credit card young people had was from Sears. Rich people had Diner’s Club and American Express cards that charged an annual fee and required you to pay off the balance each month.

In 1966, both Visa and Master Card burst on the scene, aggressively fighting for market share. We received at least a ½ dozen unsolicited credit cards in the mail, urging us to use them. Not only did Visa and Master Card charge the merchants a fee, but they also charged users a whopping 18% interest on the unpaid balance.

It did not take long for many in our society to change from living within your means to living beyond your means. If you did not have the money, simply charge it! “Buy now, pay later” became the mantra. Christmas time was quite a challenge. The joy of Christmas was quickly followed with the bitter after taste of debt.

While charge cards charging outrageous interest on unpaid balances have been around almost 50 years, many still have to learn the debt lessons the hard way. As a member of Lending Club, I see thousands of people borrowing money for “Debt consolidations loans”. Borrowing money to pay off borrowed money can be expensive. Many baby boomers, worried about retirement finally consolidate their debts, cut up a dozen or more credit cards and slowly work out of the debt trap. Once the past debts are paid off, the next challenge is to keep things that way, don’t start digging another debt hole.

Discover Card was announced during the 1986 Super Bowl and changed the game completely. They offered cardholders cash rebates based on their purchases. In layman’s terms, the credit card company charges the merchant a fee and rebates part of it back to you, the customer.

Today’s highly competitive credit card industry regularly promotes lower monthly interest rates (less outrageous than the competition), no annual fees and various amounts of cash back depending on what and where you spend.

Sorting through the options

Jo and I use different credit cards depending on their cash back amounts. One gives us a larger % cash back for groceries, another does better on gas, and yet another for dining and travel.

There are websites that compare credit card offers. Most will have links for you to apply. I was unable to find a complete list but it is a good place to start. Following are some tips based on our personal experience.

It is worth your time to investigate. In Phoenix, Fry’s grocery chain has a Rewards Card that gives you a discount on gas purchases based on what you spend for groceries. The best part is, it’s not a credit card, just something that gets swiped when you go through the checkout. Just before we left for Christmas, Jo paid for groceries with the card that gives her the most cash back for groceries. Then she went to fill up the van.

After swiping the credit card we use for gas, the pump asked her to swipe her Fry’s rewards card. The pump price was $2.00/gallon. Her Fry’s card gave her 30 cents per gallon discount. The pump price immediately dropped to $1.70. By using her card that gives her 5% cash back on gas her net price was $1.62/gallon.

The element of competition has taken us a long way from the 1% Discover initially offered, the rebates can add up to a lot of money. This year our total cash back paid for our round trip airfare to visit the grandchildren for Christmas.

Show me the money! Many companies offer you rebates other than cash. Various airlines have credit cards where you accumulate frequent flier miles; some have points that must be spent with their company. Why limit your options for use of your rebate when you don’t have to? Cash is good anywhere!

One size does not fit all. We use our Sam’s Club card for gasoline (5% cash back on first $6,000 in purchases). Costco has an alliance with American Express and we use that card for one purpose, yet we use Amex Blue for groceries. Don’t be put off by fees. If you are a member of Sam’s Club or Costco you are paying their fees anyway. By using their credit card you will save the cost of the fees and probably a lot more.

You will need to mix and match to your spending habits. Jo keeps a Target Redcard in her wallet which gives her an additional 5% off on everything she buys there.

Take your time and research. Discover Card offers “teaser” rates with things like groceries for 90 days. Then they will switch to a higher rebate for gasoline etc. It’s hard to keep track of these moving targets.

At least once a month Jo will put a credit card offer on my desk for me to look at. The headline will show a terrific cash back offer, normally better than we are currently receiving. Read the small print. There is generally a “catch”. The majority of the time the “special” rates they are offering are for a short period of time or capped at a few hundred dollars. Generally, there’s that word again, meaning there is an occasional exception – which is why I read them all.

We have found it is much easier to have 3-4 credit cards in our wallet. We use a marker and write on the back what to use them for to keep things straight.

Make your life easier in the process. Paying the monthly bills used to be a chore and time consuming. Now we take as many of our regular monthly bills, (Verizon, car and homeowners insurance, etc.) and have them charge our credit card. It’s a win for the merchant and for us as we both save money. We also found that the electric company, government property taxes and licenses also accept credit cards but add an additional fee for doing so. Those fees are always higher than the cash back so it’s a bad deal. Screw that! Write the check and mail it so it gets there just before the due date.

Credit cards make life a lot easier if they are used properly and you live within your means.

Let’s face it, you have to eat, drive, pay for insurance, use the Internet, own a phone and a lot of other things. The credit card company is going to charge the merchant the same fees anyway. Your choice is whether you want them to keep all the fees or give you some free money back. Over the next eleven months we will accumulate enough free money to pay for next year’s Christmas trip. Free money is fun!

We enjoyed a great family Christmas in Evansville, IN. We were scheduled to fly home through Chicago on Monday, December 28th. Bad weather changed that.

I will spare you most of the horror story except to say on Monday we spent 2 ½ hours in line; plus I was on hold twice with the airline for almost two hours. We got rebooked through Atlanta on Wednesday the 30th.

Our Wednesday morning flight to Atlanta had mechanical problems and landed in Chattanooga. We were finally bussed to Atlanta missing our connecting flight.

We frantically called the airlines and were in a panic because both of our cell phones were below 20% remaining charge. The Delta agent told us, (before we turned off our phones), the earliest he could rebook us was Saturday January 2nd. He said to call back when we were just outside of Atlanta.

while he was contacting airlines for the entire trip. He said it was a portable charger that was not only electrical powered, but also could be recharged by solar energy. He never runs out of juice!

As we approached Atlanta, we turned our phones on. After a long hold time, with battery power rapidly dwindling, we found one last minute possibility. We raced to the gate arriving eight minutes before the flight departed. We were the last two people on the plane. We got home very early Thursday morning. That last minute information saved us from staying in Atlanta until Saturday.

. Much like our solar powered radio, in an emergency it can make a real difference. We will take it with us any time we fly. It could have meant getting home and being stuck for three more days in a hotel.

As always, if you buy from Amazon, please use this shop Amazon Link

. We have an affiliate relationship with them and they rebate us a small stipend – just like today’s article, a little free money and keeps our website free for you.

“May all your worries last no longer than your New Year’s Resolutions!”