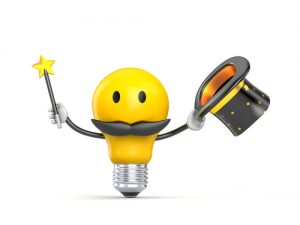 The games played by corporate America put Houdini to shame. Their illusions exclude the warning, “Don’t try this at home”, nor is it for entertainment purposes only. Corporate America and Wall Street encourage investors to buy overpriced stocks, while executives collect bonuses for lousy performance.

Looking behind the curtain

Generally Accepted Accounting Principles (GAAP) versus adjusted earnings. Many play this game when reporting their earnings. The headline earnings are “adjusted”, to make performance look better than it was. The “adjustments” can be significant.

The term “core” business is used to separate their mainstream business from other endeavors. Here is an example from a Pepsi earnings announcement. “Core (Earnings Per Share) EPS was $0.89 and reported EPS was $0.64. Core EPS excludes a $0.26 per share non-core impairment charge related to our 5% indirect equity interest in TAB.”

Their earnings call did not mention their five-page, unaudited, “Reconciliation of GAAP and Non-GAAP Information. You have to cut through the smoke and mirrors to find the truth.

EPS numbers are suspect because it may be a factor in calculating executive bonuses. Corporate manipulation of EPS is a creative art form. The best way to improve EPS is to improve profits. Good executives should be rewarded for running a growing, profitable business.

When profits are flat, executive bonuses become threatened. The game moves to changing the other variable, the number of outstanding shares. If Widget management anticipated no growth, they might decide to buy back 100,000 shares of stock.

Assume they again earned $1 million. Their EPS would jump to $2.50/share (a 25% increase), everyone would be happy, bonuses would be paid and the stock price would probably rise. If earnings dropped to $900,000, their EPS would still rise to $2.25/share (a 12½% increase). Management and Wall Street would be highlighting their increased EPS, even though profits were down 10%.

Buying back company stock creates the illusion of good performance. Widget, Inc. would be better served investing their cash in assets that will generate greater sales and profits. If their market won’t allow for that, hold the cash or increase shareholder dividends.

What if Widget, Inc. wants to buy back stock but doesn’t have the cash? Interest rates are low; why not just borrow the money? That is exactly what corporate America is doing. It’s fundamentally wrong; you buy back your stock when it is cheap, not when the market price is high.

Savvy investors are no longer fooled

“In the three-plus years since the end of January 2014, the (S&P 500) index has soared 33%. And yet over these three-plus years, even with financial engineering driven to the utmost state of perfection, including $1.7 trillion in share buybacks and despite “ex-bad-items” accounting schemes that are giving even the SEC goosebumps – despite all these efforts, the crucial and beautifully doctored “adjusted” earnings-per-share, perhaps the single most manipulated metric out there, has gone nowhere.

“Adjusted” earnings per share are back where they’d been at the end of January 2014. It’s a sad sign when not even financial engineering can conjure up the appearance of earnings growth.”

The market soars while performance is lousy! Time to look at another metric.

If Widget followed the market over a three-year period, their EPS would remain at $2/share even though they bought back some of their stock. Their stock price would rise 33% to $40/share and their P/E ratio would increase to 20 ($40 ÷ $2).

Increasing P/E ratios indicate rising stock prices without commensurate earnings. Analysts calculate the P/E ratio for the S&P 500 index and use it as a guide for the entire market.

Wolf Street’s recent article, “This is Worse than before the Last Three Crashes” gets straight to the point:

Newman said even if the market’s earnings increase by 10 percent under Trump’s policies “we’re still dealing with the same picture, overvaluation on a very grand scale.” (Emphasis mine)

Investors are also borrowing and buying

“The latest warning sign – …is margin debt, which is seen as a measure of speculation and just broke a record…

… Margin debt refers to the money that investors borrow to buy stocks, and high levels of it, …and can lead to sharper declines. Records preceded both the dot-com market crash and the financial crisis.”

Despite stagnant corporate earnings, $1.7 trillion in stock buybacks (using lots of borrowed money), record margin debt and P/E ratios that have only been higher just before a major market crash, we are told:

“Don’t worry. …expecting a similar correction because debt is at a record now would be “naïve,” said Jeff Mortimer, director of investment strategy for BNY Mellon Wealth Management.

“This isn’t a signal to me that markets are reaching an exuberant level like they did in the 1920s or 1990s, when speculation was rampant,” he said. “What our clients are doing is borrowing against the portfolios because interest rates are so low. They’re not leveraging up because they see the market exploding to the upside; they’re using leverage because they can pay it off at any time.”

Who’s being naïve? What’s behind the curtain?

What are the big boys doing?

Writes Coleman: “The number of insiders participating in the selling is significant. That would seem to imply that equities might be ripe for some level of correction.” (Emphasis mine)

The stock market is like this cool roller coaster.

A roller coaster takes a long, slow journey to the apex. Almost like magic, it seems to levitate for a while, and then it plunges downward at a high rate of speed. The visual depicts going through a dark tunnel where you lose all reference; you start up again, only to fall again, smaller highs, continued lows until you reach rock bottom. 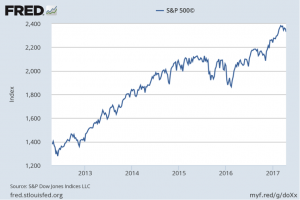 The market roller coaster is not for entertainment, you are using real money – yours! While corporate America does their best to continue the charade, Janet Yellen and her Federal Reserve gang still man the controls. I agree with Ron Paul when he writes, “The Federal Reserve is, and Always Has Been, Politicized”.

Where does the market stand now? Using the measures we’ve outlined, the market should have corrected long ago. With the Fed using their stimulus and keeping interest rates low, they brought the market to record levels, without commensurate business growth.

In 2016, the Fed held off raising rates until after the election. In the meantime the market continued to rise and levitate. Now the Fed is hell-bent on raising rates. It’s like the young hot-rod flooring the accelerator, hurrying to his next crash. No one knows when the market will fall, but it will likely be quick and a sharp decline, with smaller ups and deeper downs until reaching the bottom.

What should individual investor’s do?

Our readers are no longer fooled; we’re on to the game. Fasten your seat belts; keep your hands and feet inside the ride and hang on – avoid potential for injury.

There is never a bad time to take profits. If you want to stay in the markets, keep your stop losses current. Bond and CD holdings should be short term as interest rates are rising. Our game strategy is in place. When the inevitable crash comes, those who are safely holding cash will take advantage of good values. We too can play the game and we play to win!

Burning Platform publishes a “Quote of the day”. This one grabbed my attention:

“When people can vote on issues involving the transfer of wealth to themselves from others, the ballot box becomes a weapon with which the majority plunders the minority. That is the point of no return, the point where the doomsday mechanism begins to accelerate until the system self-destructs. The plundered grow weary of carrying the load and eventually join the plunderers. The productive base of the economy diminishes further until only the state remains.” ….G. Edward Griffin

Last week the landscaper planted several new cacti in our back yard. The highlight is a 4 1/2′ saguaro cactus. It came wrapped in a carpet and took four very careful men to plant it. They said it weight over 800 pounds. We have no idea how old it is. They are considered protected species. Cut one down and you could spend more than a year in prison.

It’s a bit humbling to know it could still be there 100 years from now. I sure hope so. In light of the Griffin quote, I wonder what the world will look like in 100 years? 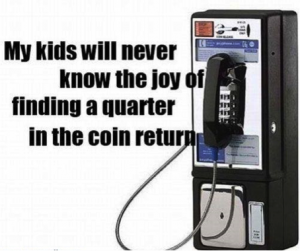