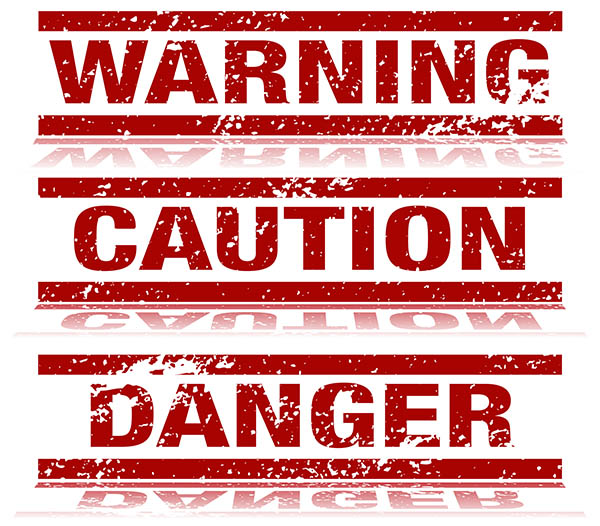 It was a picture-perfect afternoon in Fort Myers, Florida. Jo, Holly, my son Drew, a couple of his college baseball teammates and I decided to take our brand-new boat for a spin in the Gulf.

I passed my Coast Guard course and was full of confidence. We barreled toward the markers at the entrance of the Caloosahatchee River and I noticed a lot of people waving at us. I smiled and waved back.

BOOM! We ran aground. Jo was folding towels at the stern and went flying past me. Her face hit the cabin door, teeth were flying and she fell inside. I was terrified.

The Coast Guard picked up the girls in a small rubber boat. Jo headed to the hospital. A lot of pain and four implants later, her smile is intact.

We had an unusually low tide. The people who were waving were not smiling, they were warning us and I didn’t realize it. Around midnight, the tide came in and the boys were able to push us to deeper water. One engine worked and we limped into the dock. I shuddered as I typed and relived the incident.

Some Big Boys are frowning and waving their arms!

Shortly after finishing our recent interview with Chuck Butler about inflation, Zerohedge reports, “Bank of America (BofA) Hints That Weimar 2.0 Could Be Coming”:

“It’s no secret that BofA’s Chief Investment Officer has been warning that 2021…is one where real inflation will run amok sooner or later,…he repeats…how events will play out in the coming months, namely ‘the velocity of people will rise’ and ‘the velocity of money will (also) rise’.

…. BofA…expects…2021 to engender rise in velocity of money, with the ‘inflation mutating’ from Wall Street to Main Street, resulting in a pop in the nihilistic bubble.

And here is the punchline: BofA reflects back on the post-WW1 Germany as the ‘most epic, extreme analog of surging velocity and inflation following end of war psychology, pent-up savings, lost confidence in currency & authorities’ and specifically the Reichsbank’s monetization of debt, similar of course to what is going on now.

There is, of course, another name for that period: Weimar Germany, and…it is understandable why BofA does not want to mention that particular name.”

“One day after the Weimar tweetstorm below,…Burry tweeted the following:

‘People say I didn’t warn last time. I did, but no one listened. So I warn this time. And still, no one listens. But I will have proof I warned.’

None other than the Big Short, Michael Burry …. picked up on the theme of Weimar Germany and specifically its hyperinflation, as the blueprint for what comes next in a lengthy tweetstorm.”

We have been inundated with inflation cries since the 2008 bailout. When the government creates fake money out of thin air, isn’t that supposed to cause inflation? Why hasn’t it happened?

James Rickards article, “Hyperinflation Can Happen Much Faster Than You Think” is an easy-to-understand primer:

…. The other essential ingredient is velocity, or the turnover of money. If central banks print money and that money is left in banks and not used by consumers, then actual inflation can be low.

This is the situation in the U.S. today. The Federal Reserve has expanded the base money supply by over $6 trillion since 2008, with over $3 trillion of that coming since last February alone.

But very little actual inflation has resulted, or at least very little official inflation. (Emphasis mine) This is because the velocity of money has been decreasing. Banks have not been lending much, and consumers haven’t been spending much of the new money. It’s just sitting in the banks.”

“Money printing first turns into inflation, and then hyperinflation, when consumers and businesses lose confidence in price stability and see more inflation on the horizon. At that point, money is dumped in exchange for current consumption or hard assets, thus increasing velocity.

As inflation velocity spikes up, expectations of more inflation grow, and the process accelerates and feeds on itself. In extreme cases, consumers will spend their entire paycheck on groceries, gasoline and gold the minute they receive it.

They know holding their money in the bank will result in their hard-earned pay being wiped out. The important point is that hyperinflation is not just a monetary phenomenon – it’s first and foremost a psychological or behavioral phenomenon.” (Emphasis mine)

What about money supply and velocity?

When it comes to the facts, I look to John Williams at www.shadowstats.com. How much has the money supply increased and how much is in the hands of consumers to spend? 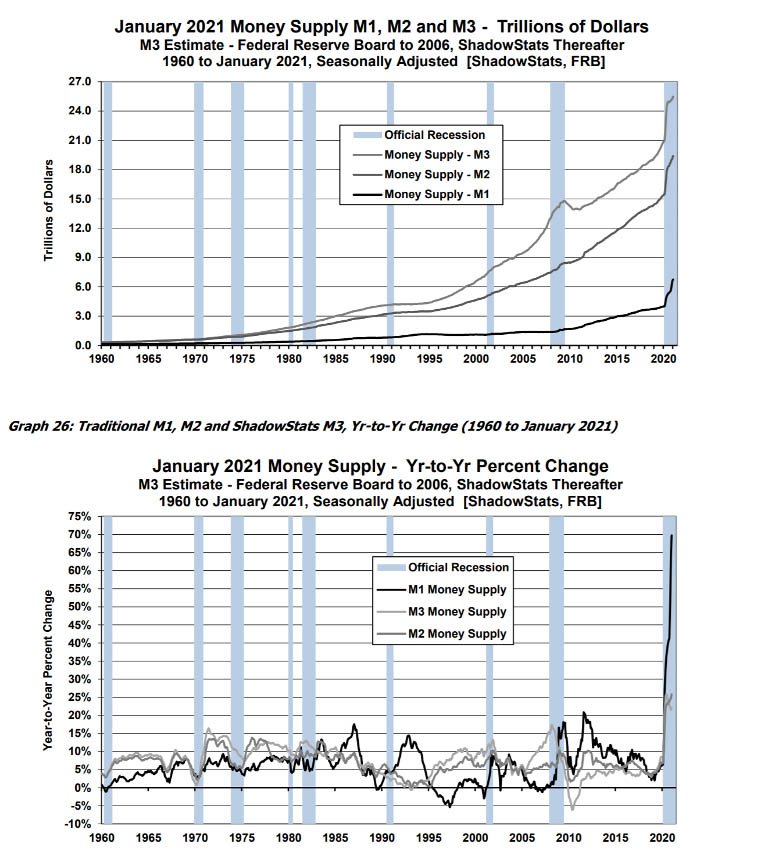 We see the increases Rickards discussed; and particularly a sharp spike in the last year. Fuel is being added to the equation for sure!

Hyperinflation is generally defined as prices increasing 50% or more in a single month. You can have terrible, destructive inflation without meeting the hyperinflation standard.

The hyperinflation of Weimar Germany is a good example of this.

One year later, in November 1923, the exchange rate was 4.2 trillion reichsmarks to one dollar. History tends to focus on 1923 when the currency was debased 58 billion percent. But that extreme hyperinflation of 1923 was just a matter of destroying the remaining 4% of people’s wealth at an accelerating rate. The real damage was done from 1919-1922, before hyperinflation, when the first 96% was lost.“ (Emphasis mine) 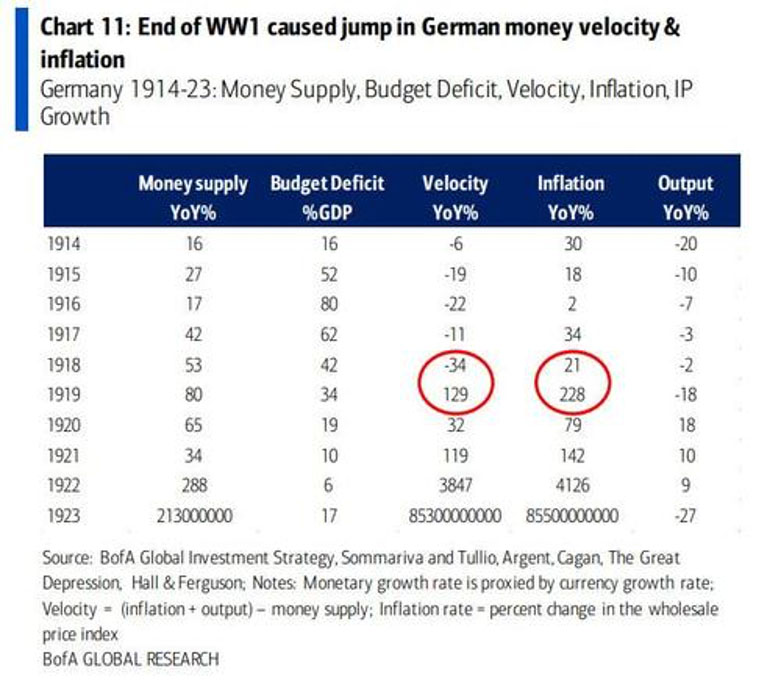 Rickards is waving his arms:

“If you think this can’t happen here or now, think again. …. Something like this started in the late 1970s. The U.S. dollar suffered 50% inflation in the five years from 1977-1981. We were taking off toward hyperinflation, relatively close to where Germany was in 1920.

Most wealth in savings and fixed income claims had been lost already. Hyperinflation in America was prevented by the combined actions of Paul Volcker and Ronald Reagan, but it was a close call.

Today the Federal Reserve assumes if inflation moves up to 3% or more in the U.S., they can gently dial it back to their preferred 2% target. …. That change is not easy to cause, and once it happens, it is even harder to reverse.

If inflation does hit 3%, it is more likely to go to 6% or higher, rather than back down to 2%. The process will feed on itself and be difficult to stop.

My parents were nearing retirement during the high inflation Carter years. Their nest egg was in Certificates of Deposit, and they lost nearly half their buying power. It was impossible for them to recover their lost wealth during their remaining working years.

Here is what we know

I understand Bill Gates is buying a lot of farmland. Might he be telling us something?

Hopefully, we will never get to the hyperinflation stage; but protecting our wealth from damaging inflation is a major concern. Hard assets, precious metals, and holding foreign currency is a good place to start!

I want to start with a public service announcement. I’m having trouble answering email from readers. For some reason, the system is returning my replies to readers with Outlook, Hotmail and other Microsoft addresses. If you have not heard from me, I apologize. We are working on getting it resolved. This stuff is really frustrating!

Jo and I are driving across the country this week to Indiana. We are pet-sitting while the kids enjoy spring break. We’re hoping for good weather; particularly for driving. 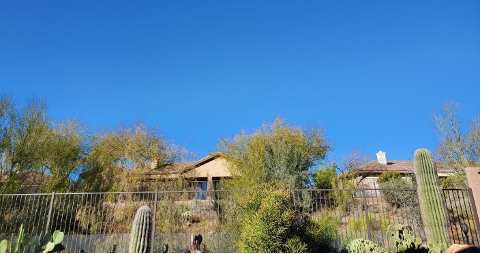 Our weather has been great. I’m enjoying sitting on the back porch in the afternoon.

The other day a beautiful bird (hawk or owl), with a huge wingspan began soaring high above. It dawned on me I’d love a picture.

By the time I grabbed the camera, it was gone. The photo is what pilots call “CAVU” (Ceiling and visibility unlimited). I’m hoping to find another opportunity to get a photo, but so far, no luck.

“The surest sign that intelligent life exists elsewhere in the universe is that it has never tried to contact us.”
— Bill Watterson

Friend Phil C. sends along some questions for our amusement: