How Far Can An Apple Fall? Should You Sell or Ride It Out? 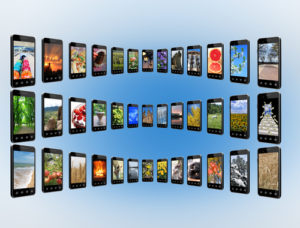 Apple was the first $1 trillion company. In May 2018 they announced a $100 billion stock buyback program. Their stock was over $225/share at the end of August.

In November, Tony Daltorio, one of our panel of experts, wrote “Two Smartphone Makers Nipping at Apple’s Heels“.

It is time to talk with the expert.

DENNIS: Tony, on behalf of our readers, thank you for your time. You did some interesting research and warned us. Please tell us what you discovered. Do you feel Apple’s woes are the result of the current trade war?

TONY: I’ve written about Apple’s woes several times in the past two months and feel the trade war actually has little to with their problems.

Apple’s only hope for unit growth has been China since it has priced itself out of other emerging markets. But in China, it and other well-known American companies, such as Nike, are losing their cachet.

Consumer polls in China show that Apple is no longer one of the top 10 most-respected brands in the country and has been replaced by local Chinese brands such as Huawei that offer similar phones for much less money.

As far as knowing about Apple’s woes months ahead of the Wall Street crowd, all it took was a little research into what was going on with their Asian supply chain. The local financial press in various parts of Asia kept repeating how Apple slashed its orders with suppliers. It wasn’t hard to put two and two together. The bad news is now that reports are surfacing again that Apple has been forced to cut production by another 10% with suppliers.

And Wall Street wonders why Apple is no longer reporting unit sales? I hope you note the sarcasm.

HP once was a high-flying tech company (and former client) with their stock priced accordingly. They were quality and technical leaders in medical products, computers, and printers in the early days.

When lower priced competition enters the market and takes away market share, the tech leader counters with technical improvements to protect their share and profit margins. The technical improvements become incrementally smaller. (Is it really worth $1,000 for a new phone to add a few megapixels to the camera?)

Eventually, the market matures and the product becomes a commodity, like an HP printer for example. The lofty gross profit margins they earned during the early years are unattainable.

Many innovative, technical companies struggle when conditions change to a price sensitive, competitive market; requiring a much different marketing approach.

You said much of Apple’s revenue growth came from raising prices while the technology gap narrows. Does that make sense?

TONY: Apple’s strategy of raising prices with little innovation is certainly backfiring in China. While local competitors like Huawei are gaining market share, many of Apple’s largest resellers in China, such as JD.com, have been forced to slash prices on some iPhone models by as much as 22% in order to unload their excess inventory.

This is likely to continue. I say that because, for example, Apple will not have a 5G-capable phone until 2020. Local Chinese competitors, as well as Samsung, will have these types of phones later this year, giving them a technical/marketing advantage.

DENNIS: Apple spent around $73 billion buying back stock in 2018. Wolf Street calls Apple the “share-buyback queen”, buying back a cumulative $213 billion over the last 5 years. They add, “But with the share price down 28.4%, and fewer shares outstanding, Apple’s market cap has plunged 29.7% since October 3rd.”

How does buying back stock help them grow and stay ahead of the competition in the future?

TONY: Stock buybacks are something investors are forced to live with but have always been a pet peeve of mine.

Here’s something most of today’s investors are unaware of.

Call me old-fashioned, but buybacks are manipulation (financial engineering) when you consider how many corporate executive compensation packages are tied to the stock price. Last year, an SEC study found how closely correlated the announcement of stock buybacks and stock sales by executives were. In many other developed countries, there are restrictions on executives’ sales during buyback activity.

The irony is that buybacks can be exceptionally wasteful and may crowd out capital investment and paying down debt. They only make sense if the shares repurchased are trading below intrinsic value and there is nowhere for the cash to generate a higher return. Unfortunately, history is repeating itself with a record amount of stock buybacks in 2018.

The last time US buybacks hit a record was in 2007, on the eve of the financial crisis. The market promptly plunged, leaving the clear message that chief executives had been buying high and destroying value in a big way. Then when the market sagged in 2009 few bought low. Indeed, what emerges seems to be corporate managements’ innate tendency to do the equivalent of buying high and selling low.

I don’t feel Apple is exempt from this situation at all. Their buybacks have not helped better position them in the market. It looks like “financial engineering” to me.

DENNIS: One common path for cash-rich companies is to buy other companies. Unfortunately, HP struggled. Forbes details an $11.1billion acquisition where HP took an $8.8 billion write off – a year later. They paid $13.9 billion for EDS and wrote off another $8 billion before selling the company.

What do you see from Apple in this regard?

TONY: Obviously, Apple can buy just about any company. So far, Tim Cook has shown restraint in this regard. But if the bad news continues flowing, he may end up buying a tech company right near the end of the current economic and tech cycle (such as is occurring with semiconductors), meaning he will have ended up paying too much.

DENNIS: I served several high-tech leaders during my career. When things were going well, they had terrific gross profit margins and they were flying high. When their technical edge narrowed, and they faced price competition they struggled, looking for R&D to invent something new. They had to learn how to survive in a competitive marketplace.

Competition now has excellent computers, phones, watches and tablets to compete with Apple. Unless they develop a new product that changes the world like they have done in the past, won’t their margins/stock price come back down to earth? I’m sure Apple will be a great company for years to come; however, it may be time for investors to change their expectations.

TONY: I totally agree with you, Dennis.

DENNIS: Even the best companies suffer when the market has a sharp downturn. You recently wrote in your Premium Digest newsletter:

“I believe bond guru Jeff Gundlach, founder of Doubline Capital, really hit the nail on the head when he told CNBC that the Fed seems to be on a ‘suicide mission’…. Thanks to the Fed, U.S. financial conditions have tightened a lot.”

While Apple may not live up to Wall Street estimates, what do you see for the market in general over the next several months?

TONY: Dennis, I remain worried unless the twin problems of Fed policy and Trump pursuing a global trade war disappear. The strong rise in early January may end up seeing us repeat 2018, as harsh realities force the market to readjust their outlook for 2019.

It’s not time to be complacent. Investors need to stay on top of their entire portfolio; no one knows for sure which way the market will go.

In Apple’s case, their stock might go back up however there is no guarantee. Many investors are sitting on huge gains and they need to lock them in.

DENNIS: Thank you, Tony. I know our readers appreciate your insights.

TONY: My pleasure Dennis, any time.

Dennis here. Not only is Tony on top of things, but he also tells me things I did not know.

Congress made it easy for companies to repatriate money into the US with minimal taxes. Their intention was to provide cash for business growth, not stock buybacks. I would hope Congress takes notice and stops allowing corporate executives to buy back stock to fatten their own wallets.

While we have no control over the political side, we can control how and where we invest. Apple may be the darling of Wall Street however, Tony gives us a clear insight about where they stand today.

I highly recommend Tony’s publication, The Growth Stock Advisor. He is an educator as well as being a great analyst. I urge readers to take advantage of his special discount offer below for Miller on the Money Readers.

While much of the country is dealing with winter weather, here in Phoenix we have had mild days and clear skies. Around 50 years ago, I got frostbite on an ear. When I am out in cold, windy weather my ear reminds me of the experience. If God meant for me to be cold, I’d have more fur!

If you are planning an AZ trip, here are a couple of places you might want to visit.

This is the Frank Lloyd Wright house in Scottsdale, AZ. It is called Taliesin West. It is on 620 acres and was opened in 1937. It is not only educational, but a fun day trip.

About an hour north is Sedona, famous for their red rocks. Be sure to visit Red Rock State Park.

This photo is one of my favorites of the red rock formations. I was lucky enough to catch the sun just right to bring out the color. I recommend bringing your camera and getting to know the town. There is plenty of hiking, shopping and dining to keep a family busy and happy.

When Jo and I first visited Sedona, we looked at a model home. Jo stopped me, holding her finger up to her lips saying, “shhhh”. She pointed out the window. There was a full-grown elk in the back yard.

One of the most beautiful drives in the country is on Route 89A, heading north out of Sedona Along Oak Creek all the way to I-17.

Super Bowl is coming up. The NFL has plenty of problems these days and they did not need two “tainted” conference championship games leading up to their big event. I’m like my friend Chuck Butler, I may not even watch the game.

Friend Stephen H. figured out how to answer an age-old question once and for all. 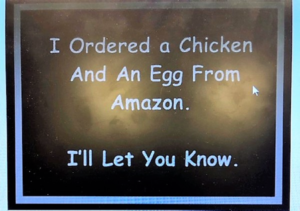