How Good Is Your Comfortable Retirement Guarantee? 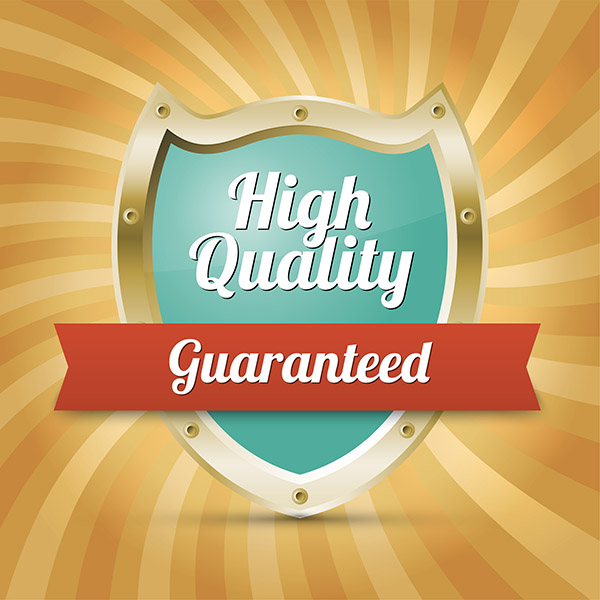 For generations Baby Boomers were told to follow certain rules and, with Social Security, then later Medicare, they were guaranteed a safe, comfortable retirement.

Oops! For many it is not happening; did they fail to read the small print, or understand things?

Dictionary.com defines guarantee, with some examples:

“a promise or assurance, especially one in writing, that something is of specified quality, content, benefit, etc., or that it will perform satisfactorily for a given length of time: a money-back guarantee.

to make oneself answerable for (something) on behalf of someone else who is primarily responsible: to guarantee the fulfillment of a contract.

to undertake to ensure for another, as rights or possessions: The Constitution guarantees freedom of religion.”

“Our new Constitution is now established, everything seems to promise it will be durable; but, in this world, nothing is certain except death and taxes.”

Sadly, even Constitutional guarantees seem to be morphing into the level of political promises.

Moneywise reports that members of congress rate just ahead of car salesmen as the most dishonest professions, with low ethical standards.

Nothing new here, been that way since the beginning of time.

Let’s look behind the guarantee curtain….as it relates to retirement planning.

Taxes are guaranteed; however, what is taxed, the tax rate and implications are constantly changing.

If the current tax changes in congress come to pass, retirees will refer to 2020 as “the good old days”.

The Charlotte Business Journal tells us:

“In the past few years, we have experienced three major tax and financial changes that we typically only expect once a decade….

This year, we are expecting another major bill (if not multiple) to be signed that may affect how you wish to structure your finances. It is key to remember that no bill has been proposed that is expected to be signed immediately.”

Who knows what will come to pass? The predicted fourth major tax change, which could be retroactive, will impact retirees, savings, income and lifestyle.

Focus on what you can control

I define “Comfortable Retirement” as living a comfortable lifestyle, without constantly worrying about money.

Understanding investments; what is, and is not, guaranteed is the first step. Step two is investing in such a manner that your overall portfolio, plus retirement income, allows you to achieve the “Comfortable Retirement” goal.

You can generally get some, but not all from an individual investment.

Don’t assume guarantees or promises that do not exist.

When I retired, my wife Jo and I were heavily invested in FDIC-insured Certificates of deposit. We felt we could count on regular, contractually guaranteed income each month.

When the 2008 bank bailout came, our CDs were called in. We didn’t lose principal; however, what we thought was guaranteed income disappeared.

Is social security really guaranteed? Recently Jo’s family sold the family farm. After taxes, she could not invest the remainder and safely earn anything close to the income the farm provided.

The crowning blow? We got a notice that our social security checks for 2021 would be reduced by approximately $9,000. On paper, our social security benefits were not reduced; however, they raised our Medicare premiums because of the farm sale. In essence, they are means-testing benefits; including those for existing retirees.

Don’t be fooled with the social security inflation rider. Inflationary increases are generally offset with increases in Medicare premiums. You may get an inflationary boost in your benefits, but it is routinely taken back in government medical premiums. If your other bills increase, you are on your own!

In the following chart, I take some common investments and look at the promises and drawbacks. Let’s start with definitions:

Guarantor safety is the strength of the promise, and the government agency/insurer backing the promise.

If a bank fails, the FDIC insures depositors will not lose their money, up to a certain amount. States have various plans insuring annuity holders from default on the part of the insurance company.

If one party breaks their promise (defaults), is there an insured backup or do investors have to go to court to recover what they can?

Guaranteed Income means the money is guaranteed to arrive as promised for the life of the agreement. Many investments are “callable”, meaning the borrower can end the agreement at will by repaying the principal.

Principal Protection means you will not lose the amount you invested. Many bondholders have found their income came in as promised, but when the bond matured the issuer could not pay them back. They end up in the court system and can lose a lot of money. How safe is the principal?

Buying Power. Will payments increase with inflation? My parents bought CDs during the Carter years. When they matured, they got their money back but lost around 25% in buying power. 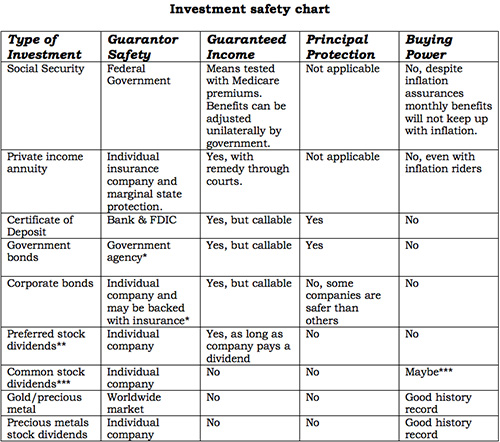 *Bonds are rated for safety by private rating agencies. Theoretically, bonds with a higher default risk pay higher interest. If an investor is worrying about losing their money, they should seek other alternatives. The rating agencies are not always accurate. Let the buyer beware!

Guarantees are nothing more than promises or assurances, including those from the government. There is no one, set it, forget it and go enjoy retirement investment.

CDs and quality bonds don’t pay enough interest to beat inflation, particularly if they are held in a taxable account.

How do you do it?

When friend Chuck Butler and I preach diversification, we mean accumulating a group of investments together to take advantage of the positives, while offsetting the negatives (counter-balance) with other types of investments.

Many retirees love the contractually guaranteed lifetime income annuities. They must counter-balance and provide for the lack of inflation protection by holding investments that hedge against inflation.

When there is a major stock market correction, even the best companies will see their share prices drop – and they could take years to return to their previous highs.

Dividend expert Tim Plaehn sorts through thousands of candidates finding solid companies that will thrive through tough times and continue to reward investors with solid, safe and many times growing dividends.

While their dividends are not guaranteed, Tim seeks out companies with a good, proven history record and great business. He recommends buying small amounts regularly so your costs even out. That beats fee-based mutual funds specializing in dividend-paying stocks.

Ben Franklin said, the only guarantees are death and taxes. I expect our 2020 tax rates will be the lowest I will see for the rest of my life; nothing I can do about that.

The best guarantee in life is the one you give yourself and your family.

No one cares more about your money than you do. The investment world is constantly changing. Investing in continuing education and resources gives Baby Boomers the best chance to control their own destiny for the duration; without worrying about how to pay their bills, including taxes; now and in the future.

Before I forget, Chuck Butler is an expert panelist in an upcoming FREE video conference, “Why Metals and Commodities Are Ready To Boom.” It is an interactive, three-day event with 30 big names like Peter Schiff, Adrian Day and Chuck Butler. This is going to be very in-depth, including specific buy and sell recommendations.

Click HERE for more information, and scroll down to claim your FREE pass. I signed up and it provides a list of speakers and times with a “Remind Me” icon. I clicked several, including Chuck who is scheduled to speak on Thursday afternoon, April 22nd.

Yes, I am giving Chuck a plug, and hope that all of our readers tune in. Chuck gives us a lot of his time – for FREE – to help with our education. Chuck is a true educator. His audiences love him; he is genuine and calls them like he sees them….

Today is Tax Day, the following seems fitting…even if it is a pipe dream!

“When I say cut taxes, I don’t mean fiddle with the code. I mean abolish the income tax and the IRS, and replace them with nothing.” — Ron Paul