I don’t have time to plan – I’m too busy 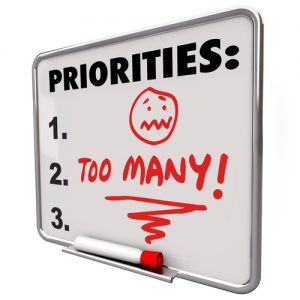 I hung up the phone and shook my head. I have a good friend (I’ll call him Joe) who talks with me about his retirement fears. He’s in his peak earning and expense years with children getting ready for college. He’s diligent about making his 401 (k) contributions although he is not contributing the maximum.

As always, I suggest he work with a financial professional and “run the numbers” to see if he is on track to be able to retire comfortably. That suggestion is followed with a discussion of how busy he is and not having time to get around to it.

His “I’m too busy plan” remark coupled with the belief that “things always seem to work out” is very common, at least according to the Employee Benefit Research Institute (EBRI) 2016 Retirement Confidence Survey.

Why is confidence important?

After you round the 4th turn in life you want to enjoy the ride to the finish line. Confidence is not only having enough money to provide for a comfortable lifestyle; but also not having to constantly worry about money.

In my January article, “Conquering your Fears” I reported on an Allianz Life survey that showed 61% of respondents fear outliving their money more than they fear death.

A misinformed person can experience both unrealistic fears and false confidence based on what they don’t know.

The EBRI surveys both workers and retirees to judge their degree (or lack) of confidence about several retirement issues. It’s easy to get caught up in the facts, figures, statistical analysis, and lose sight of the big picture. Here are their headline numbers for workers and retirees:

“The percentage of workers very confident about having enough money for a comfortable retirement…leveled off at 21 percent…while the percentage not at all confident decreased…to 19 percent in 2016.

Retiree confidence in having enough money for a comfortable retirement, which historically tends to exceed worker confidence levels, continued to increase in 2016 reaching 39 percent who are very confident…. The percentage not at all confident was 12 percent.”

“Things always seem to work out” is a myth for the “no plan” group.

Joe is not alone

“Less than half (48 percent) of workers report they and/or their spouse have never tried to calculate how much money they will need to have saved so that they can live comfortably in retirement.

Workers often guess at how much they will need to accumulate (39 percent), rather than doing a systematic retirement needs calculation. Twenty-six percent indicate they did their own estimate and 22 percent say they asked a financial adviser.”

Excuse me! Over half (52%) of the respondents have never attempted to calculate how much they need and 39% of those who do guess? EBRI should put their no-brainer conclusion in bold print:

…. workers who have done a retirement savings needs calculation are more likely than those who have not done the calculation to say they feel very confident about affording a comfortable retirement.”

Almost two-thirds (62%) of retirees, versus 35% or workers report Social Security is a major part of their retirement sources of income.

Do you keep working? There is a real gap between the (67%) amount of workers who say they plan to work past the normal retirement age, versus 27% of the retirees who actually do so. Almost half (46%) of the retirees indicated they left the work force earlier than they expected.

A minority (38%) of the retirees report their retirement expenses are higher than expected. To adjust for the reduction in anticipated income, a solid majority (60%) indicates they have reduced spending, adapted, and manage to live within their means.

The heavy reliance on Social Security is because other sources of income are much lower than anticipated. It’s a revenue problem, not an expense problem.

Retirees may be more confident because they were able to scale back their lifestyle.

I recently wrote about the Federal Reserve wanting Americans to borrow and spend to stimulate the economy. It’s not happening, nor should it. Baby boomers and retirees know better and are doing the opposite.

A study by the National Bureau of Economic Research concluded, “Only one-fifth of the survey respondents said that the 2008 tax rebates would lead them to mostly increase spending.” Many respondents preferred to save the rebate while the most common plan was debt repayment.

While Joe is a fictitious name, when he reads this he knows I am talking to him (and many of his peers). It’s time for some non-sugar coated straight talk.

1. I don’t want to hear the excuse about being too busy to plan ever again. Unless you want to radically cut your expenses and live a different retirement lifestyle because you did nothing; call a qualified financial planner, run the damn numbers and get going.

I planned on sending you the famous motivational GOYA button. This website says they are sold out so a picture will have to do. 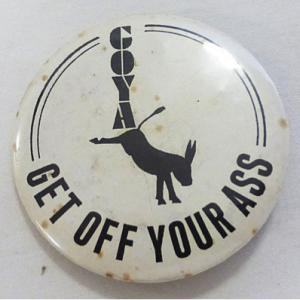 2. Get your spending & savings under control – now! When you work you are trading your time for money. When you retire you trade money for time. You make a damn good living. Like those before you who have run the numbers, change your priorities and invest in your future. You don’t need more cool stuff.

3. Get out of debt – period! If you want to live without constantly worrying, being debt free is the place to start.

4. Get your spouse involved in the plan so you both are committed. One partner committed to saving; while the other spends away does nothing positive for the marriage or retirement. The exercise will bring the two of you closer together. I can tell you from personal experience it makes your retirement a lot more fun.

5. Take control of your 401 (k). Invest in the right assets, diversify and eliminate as many fees as you can. You are at the age where you need to reduce your risk, don’t gamble trying to catch up with the bulk of your life savings.

6. Don’t buy the rosy projections based on past history. Right now the government is using a Zero Interest Rate Policy (ZIRP) and may go to negative rates. Even those who have run the numbers are shocked at the end of the line. They’re cutting back because their nest egg is not earning nearly what they anticipated. When in doubt – be conservative.

7. Get started now. Getting a financial checkup is like getting an age appropriate medical checkup. My dermatologist said it best; “When people get started early, I can treat the problem with a spray can. When they put things off, I treat them with a scalpel and stitches.”

When you were in your 30’s and decided to “deal with it later” you probably had little choice. You are in your 50’s now, tomorrow has come and it’s time to get going.

I’m surprised at the confidence level reported by the survey; particularly when the majority of participants haven’t run the numbers and are guessing.

Confidence must be based on substance, not just hope. A confident, uninformed person is lost and doesn’t know it.

When things don’t work out, some say it is bad luck, as though they were powerless. Making good, timely choices improves your luck. Decisions you make, (or put off) today will impact the rest of your life. The study is clear; an informed investor with a plan ends up with more money, more confidence and a happier retirement. The choice is yours!

We’re now in Indiana enjoying the young grandchildren. Before we left, my dermatologist removed some more potential skin cancer, followed by a stern lecture. Between the grandchildren’s ball games, auto shows and an occasional outdoor concert, we are sitting in the sun more than we realize.

We recently invested in some really neat lawn chairs

They are lightweight, easy to carry and you can flip up one side for an eating/drink table and the other side is a small cooler. For the really hot days wrap a hand towel around a piece of blue ice and keep it in the cooler.

We also bought a neat clamp on umbrella

for each chair that has all kind of adjustments to keep the sun at bay.

We took them for a test drive at an outdoor concert and Jo and I love them.

Regular readers know I am committed to keeping this website free. I’ll occasionally promote a product we use and enjoy. Click HERE

to order them from Amazon. Amazon Prime members report the link works just fine. Your prices are the same and we earn a small stipend to help offset some of our production costs. Thanks again to our readers who help out, Jo and I appreciate it.

Courtenay W. sent along some cute celebrity quotes for us to enjoy:

Of course my favorite has to do with baseball: