I want the truth! 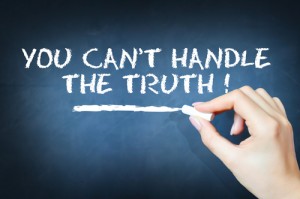 Kaffee: “I want the truth!”

If the Fed wanted us to know the truth they are capable of a clear explanation in plain English. Instead they talk in “Fed-speak” and then tell us what they want us to think. Like Col. Jessup, they think we can’t handle the truth.

“…. We want to know why the Federal Reserve, funded and heavily run by the banks, is keeping interest rates so low that we receive virtually no income for our hard-earned savings while the Fed lets the big banks borrow money for virtually no interest. It doesn’t seem fair to put the burden of your Federal Reserve’s monetary policies on the backs of those Americans who are the least positioned to demand fair play.

…. We are tired of this melodrama that exploits so many people who used to rely on interest income to pay some of their essential bills. Think about the elderly among us who need to supplement their social security checks every month.”

Since the Fed implemented their Zero Interest Rate Policy (ZIRP) I have seen estimates of over $4 trillion in interest that would have been paid to seniors and savers, has instead gone to banks and the government in the form of saving interest expense.

In a 2012 speech to the Economic Club of Indiana former Chairman Ben Bernanke was asked about the effect of ZIRP on seniors and savers:

“One concern in the here and now is about the effect of low interest rates on savers and investors. My colleagues and I know that people who rely on investments that pay a fixed interest rate, such as certificates of deposit, are receiving very low returns, a situation that has involved significant hardship for some.

However, I would encourage you to remember that the current low levels of interest rates, while in the first instance a reflection of the Federal Reserve’s monetary policy, are in a larger sense the result of the recent financial crisis, the worst shock to this nation’s financial system since the 1930s.”

In essence he implied that the impact on seniors and savers is “collateral damage”, a term used euphemistically to refer to inadvertent casualties among civilians during wartime. Seniors and baby boomers comprise a large voting block – and they are fed up with being treated so flippantly. Mr. Nader hit the nail on the head!

“Americans generally have benefited, most particularly lower- and middle-income people affected disproportionately during the downturn,”.

“…the Fed lowered borrowing costs for millions of American families and businesses, in turn supporting the housing market and job growth”, she argued…. “Would savers have been better off if the Federal Reserve had not acted as forcefully as it did and had maintained a higher level of short-term interest rates, including rates paid to savers? I don’t believe so.”

While acknowledging seniors and savers this way: “caused hardship for some of them, particularly seniors on fixed incomes”, nothing was said about any remedy. Ms. Yellen goes on to discuss how much interest borrowers saved during the process. If you are a senior on fixed income, or a lender instead of a borrower too bad! In plain English that means, “tough(bleep)! – Protecting the two biggest borrowers, the banks and government, takes priority and we have no intention of changing anytime soon”.

The heat is being turned up

Congress is feeling the heat from the voters. The House of Representatives just passed The Fed Oversight Reform and Modernization Act and sent it on to the senate. The New York Sun says, “That has got to be one of the most gentle, democratic, transparent reforms in the history of democracy. It doesn’t require the Fed to stick to its monetary rules, just develop a set of guidelines and let the Congress know what they are.”

The Federal Reserve website spells out their authority clearly:

“As the nation’s central bank, the Federal Reserve derives its authority from the Congress of the United States. It is considered an independent central bank….

In summary, seniors, savers and most pension funds in America are struggling. The Fed’s boss (congress) is asking for an audit and transparency regarding their activities. The bill tells the Fed to get their act together, or congress will step in and do what must be done. Seems like a no-brainer to me, it should be something both political parties and the Fed should support.

Ms. Yellen responded with a letter to House Speaker Paul Ryan and minority leader Nancy Pelosi. Yellen vehemently opposes the act saying the House bill “attempts to increase transparency and accountability through misguided provisions that would expose the Federal Reserve to short-term political pressures” (emphasis mine).

Reuters adds, “…Yellen argued that policymakers do not understand the economy well enough to come up with a rule that would reliably guide the economy through its ups and downs.”

Ms. Yellen warned that auditing the Fed would hinder the central bank’s policymaking deliberations and it would be a “grave mistake”, detrimental to the economy and the American people. The Obama administration has threatened to veto the bill.

Let me see if I’ve got this right!

1. Ms. Yellen opposes the bill because it might cause things to become politicized? The president and many liberals in congress are lining up to stop the measure; isn’t that already politicizing things? Why would anyone, regardless of political party, not be in favor of this legislation? What don’t they want the public to know?

2. Ms. Yellen opposes the bill because “policy makers do not understand the economy well enough to come up with a rule”. Sounds like a put-down to me! Doesn’t the bill say for the Fed to develop the guidelines and let congress know what they are?

I spent almost 50 years as an adult educator. Many high-brow elitists use fancy $2.00 words to appear smart, impressive and confuse people. (That is how I define “Fed-speak”) If you want to be clearly understood, use 50-cent words (plain English).

If you want people to know you are smart, take complex issues and explain them in plain English, so people clearly understand. It is a cop-out to imply others just don’t “get it”. It’s Ms. Yellen’s job to communicate clearly until they do “get it”. If policy makers don’t understand, Ms. Yellen has failed as a communicator.

In search of the truth

After 7+ years of ZIRP, Americans have seen their retirement plans crushed. The “too big to fail” banks are not only being bailed out with taxpayer dollars, but Americans also see bank profits approach record levels. You don’t take $4 trillion in interest away from hard working savers and give it to banks without being held accountable for your actions. Mr. Nader is echoing William Gouge discussing the panic of 1819 who said, “The Bank Was Saved, and the People Were Ruined.”

American’s know that congress and Federal Reserve are responsible. Congress was turned over to Republican leadership who ran on a platform of fiscal conservatism; yet they have done nothing they promised. Voters of all ages are voicing their frustration. The former Speaker of the House is now gone because of “business as usual”. One of the first things the new speaker did was get the aforementioned bill passed in the House. Congress is feeling the heat; those on the receiving end of collateral damage are speaking out as Nader has done.

Ms. Yellen’s child-like pushback is an insult to the intelligence of all Americans. I’ll summarize it (in 50-cent words); “Don’t pass this bill to audit what we do, you’re not smart enough to understand anyway. Don’t hold us accountable for our actions. Don’t expose us and let the public know what games we have been playing behind the scenes.”

As both a senior and saver, I want to know:

1. Why, almost overnight, was the Troubled Asset Relief Protection (TARP) passed bailing out the banks, with a corresponding 66% drop in CD rates?

2. The TARP bill was sold as a “one time” bailout. Why did the Fed add more bailouts called Quantitative Easing (QE)?

3. Specifically, What can we expect over the next 5-10 year?

Ms. Yellen may be so arrogant to think she is protecting us because we are incapable of understanding and can’t handle the truth. Her response is causing even more distrust. What are they hiding? Is the Fed withholding the truth to protect the citizens or themselves?

Hard working Americans deserve to know the truth and are quite capable of handling it. It’s hard enough to save and plan for retirement; we don’t need the continual uncertainty that the Fed has followed over the past few years.

Last weekend the teams for the College Football Bowl games were announced. Northwestern will be playing in Tampa; the year we move away, they get invited to play there.

Baseball is in the news with the top two free agent pitchers beings signed very quickly. The Boston Red Sox and Arizona Diamondbacks just guaranteed $423 million combined to David Price and Zack Greinke. Many people feel no one should be paid that kind of money for playing a game. As I tell my friends, you have millionaire players and billionaire owners. No one goes to the park, or is glued to the TV set to watch the owners entertain. Top Hollywood box office draws are paid millions to be in a movie, it’s just a different form of entertainment.

Friend Bob L. supplies us with some advice from an old farmer:

And with the holiday season in full swing: