If Interest Rates Are Negative, What Should We Do?

In our recent article, “What The Heck Is Going On?”, our guru friend Chuck Butler remarked:

“There’s no harm in holding cash, as long as your bank isn’t charging you to do so, which is probably coming down the road, so be prepared!”

Chuck’s remark did not go unnoticed. Subscriber Rikk M. asked, “IF we go “negative” what is your thought on the solvency of the banks at that point in time with people pulling out their funds…it sounds frightening!”

Rikk, you are correct, it is frightening!

What are negative interest rates?

“This unusual scenario is most likely to occur during a deep economic recession….

In early 2016, Chuck warned us, sharing some quotes:

“Imagine a bank that pays negative interest. In this upside-down world, savers are penalized and borrowers get paid to borrow money. Crazy as it sounds, the 2008 financial crisis created a lingering economic slump that drove the European Central Bank to experiment by cutting benchmark lending rates below zero in 2014. Then Japan followed. Some 500 million people in a quarter of the world’s economies ended up living with rates in the red.”

…. There’s also a growing backlash about the impact on savers and concern about how that could taint the public’s view of the central bank. (NOTE: A Fed chair called this “collateral damage”)

To many critics, though, the policy has simply run out of steam and may prove difficult to reverse.

“Negative interest rates were seen as an experimental measure after traditional policy options proved ineffective in reviving economies damaged by the 2008 financial crisis and recession.”

“In July, the…St. Louis Federal Reserve published a research paper outlining the steps the Fed has taken, and concludes:

Much of the work on the quantitative effects of QE (Quantitative Easing) consists of event studies, whereby researchers look for effects on asset prices close to the date of an announced QE intervention…. All of this research is problematic, as it is theoretical.” (emphasis mine)

David Stockman gets to the point:

“The fact is, anyone…can see in an instant that 80 months of ZIRP (zero interest rate policy) has done exactly nothing for the main street economy. Notwithstanding the Fed’s gussied-up theories…the litmus test is real simple.

…. Artificial suppression of free market interest rates by the central bank is designed to cause households to borrow more money than they otherwise would in order to spend more than they earn, pure and simple….

But the whole enterprise is a crock.”

“The members of the Fed become reverse Robin Hoods as they take from the poor (and unsophisticated) investors and give to the rich (and politically connected).”

I don’t buy this experiment BS one bit. The 2008 bailout was supposed to be temporary. A decade later the Fed is using the Coronavirus crisis to bail out the banks for a second time, lowering rates into negative territory to encourage banks to lend more and citizens to spend money they don’t have.

Rikk, the banks will be fine, the Fed and Congress will protect them.

Since 2008, Japan’s rates have never been 2% and zero to negative for the last four years.

“Now, about $16 trillion worth of the global debt market has negative yields…. (Estimated to be 25% of the world market)

…. Central banks around the world have dragged down bond yields by keeping interest rates historically low.

…. Negative rates at the time were seen as short-term jolts to struggling economies, but the phenomenon has slowly evolved into something analysts and investors are prepared to grapple with for the long term.”

What happens next, a run on the banks? 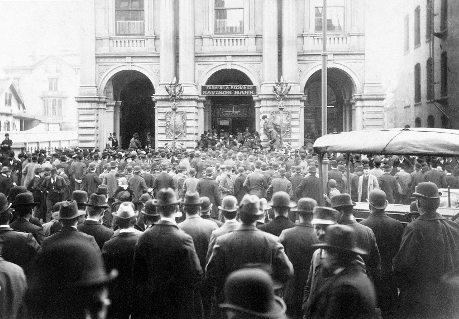 “If citizens see they are being charged for holding cash in the bank, wouldn’t they then just go to the bank and withdraw their cash? Well, that would be the normal reaction. Sweden tried to outlaw cash, it is no more, it’s only digital units in your bank account?

QZ.com reports a pushback but concludes, ‘In all likelihood, Sweden will continue to serve as a laboratory for what happens when a society gives up on cash.’ They also tell us Britain is next.

The theory behind using negative interest rates is that consumers would withdraw cash from the bank and spend it, rather than have it charged fees by the bank. And this is where it gets sticky. What IF, the Treasury issues a banking law that prohibits the use of cash in transactions at about the same time? Uh-oh! Now we’ve got problems, citizens are stuck in the mud! What if they hit their credit card limit? They can’t withdraw their cash, and their cash is getting charged for sitting there! Oh, but that’s not all!

Now the banks can charge you for anything and everything they feel like charging for, because you can’t do a thing about it! (Think interest rates on credit card balances from day one.) Go ahead, call the bank and tell them you want to move your funds to another bank… After laughing hysterically, the banker will then tell you that your new bank has the same fee structure. Price fixing is illegal, Wink! Wink!

And now the Gov’t gets to know everything you spend money for…everything, because it’s all digital units in the bank!

Longtime readers of the Daily Pfennig know I threw a hissy fit when the Patriot Act was enacted. That began a string of losses of our civil rights, and when they begin to add up, they all point to a cashless society.”

I asked Chuck, “If we go negative, won’t that be the final blow to the USD as the reserve currency? If the world no longer needs our dollars the government would get the inflation they are yearning for. Wouldn’t negative interest and inflation blow up every 401k, public and private pension plan in the country?”

In typical Chuck Butler fashion, he replied, “Yes, got gold?”

The politicos of course! Look at interest rates.

If interest on our approximate $24 trillion in US Debt rate was 5%, as it was in 2007, it would cost around $1.2 trillion annually. Currently ten-year bonds pay .57%. That is a negative yield when factoring in inflation. Politicos don’t want free market interest rates.

1. Diversify your currency holdings. A prudent investor would not put their entire life savings into one stock, one currency or country. If the world is dumping USD, you will be glad you diversified.

2. Limit the amount in a single bank. Make sure account balances are under FDIC insurance limits. Many presidential candidates favored a “wealth tax”. It’s easy for the government to grab from wealthy depositors.

I tried to withdraw $5,000 from my local bank recently. They limited the amount to $3,000 and told me to come back tomorrow. I couldn’t withdraw any more for a week. Will the next crisis bring a “bank freeze”? This photo of a desperate Greek pensioner is heartbreaking.

3. Tighten up your core holdings. Core holdings are insurance against catastrophe. You hope you never have to use them. Gold should be part of those holdings. When Chuck says “Got Gold?” he means it – gold is money, plain and simple.

4. Own junk silver. If cash was eliminated, a barter system will likely come into play. Junk silver is silver coins, a recognizable value, and portable. They would be excellent for barter.

5. Don’t get caught in political hype. This is not a partisan issue, the government is out of control and the citizens always pay.

Rikk, while it’s frightening, those who have prepared will fare better than most.

I was happy to see a government plan for getting 22 million people back to work. I HATE seeing politicians trying to make hay out of this situation.

Here are some real numbers from our part of the world.

This article outlines the actual mortality rate, not models or guesses.

“COVID-19 takes 20-25 days to kill victims. The [Silverman and Washburne] paper reckons that 7m Americans were infected from March 8th to 14th, and official data show 7,000 deaths three weeks later. The resulting fatality rate is 0.1%, similar to that of flu. That is amazingly low, just a tenth of some other estimates. Perhaps it is just wrong, possibly because the death toll has been under-reported. Perhaps, though, New York’s hospitals are overflowing because the virus is so contagious that it has crammed the equivalent of a year’s worth of flu cases into one week.”

You have 3/10,000’s chance of catching it in our zip code and the unlucky ones have a 99.9% probability of surviving.

The numbers where our daughter lives in Indiana are IDENTICAL!

It’s a tough decision. Much like a battlefield general, the government has to look at the number of people out of work and small businesses that are struggling versus the increased probability of catching the virus. Some politicos and the media will blame every death on the president.

This isn’t about Wall Street and the stock market; this is about Main Street. Our youngest daughter owns a small company and they are doggone concerned about their employees and their families. Many have small children and are living from paycheck to paycheck.

We are all responsible for our own behavior. The mortality rate is similar to the flu. No one wants to catch the flu and die, so we take precautions.

If you are elderly, not feeling well, running a fever, have to use public transportation – use some common sense.

This too shall pass…the sooner the better!

ON TURNING 70
“I still chase women, but only downhill.”

ON TURNING 80
“That’s the time of your life when even your birthday suit needs pressing.”

ON TURNING 90
“You know you’re getting old when the candles cost more than the cake.”

On his death bed they asked him where he wanted to be buried.
His answer was, “Surprise me.”