If Oil Prices Are Negative, Why Aren’t They Paying Me To Fill The Tank? 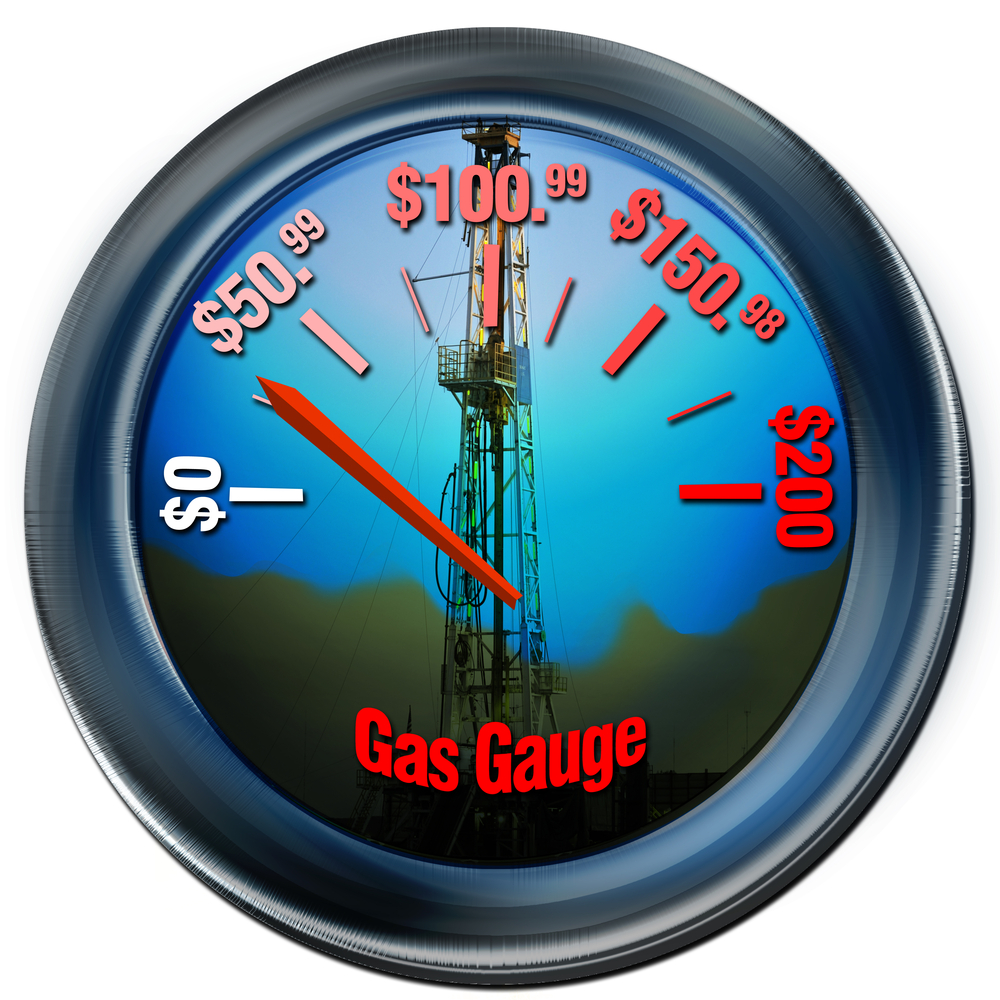 My wife Jo is a proud farm girl, growing up in rural Indiana. Like many midwestern farmers, they receive oil royalties for wells on their land. Having passed down through many generations, each share is nice, but not enough to fly first class.

Jo came into my office with a very concerned look on her face. She asked, “I just saw that oil prices are negative. How can that happen? Why aren’t they paying me to fill the tank?”

I recently wrote about negative interest rates. What is this world coming to? I said I’d do some research and we could discuss it at lunch.

There was no short answer to her question. I must explain the futures market and how it works before I can address the question specifically. Our conversation went something like this….

DM: Suppose your dad just planted his corn and needed some cash, and didn’t want to borrow it. One choice would be to go to the futures market.

He could (using a broker) go to the exchange and sell corn that he just planted. A corn futures contract is 5,000 bushels. The buyer and seller agree on a price and delivery month.

Assume your dad sold one contract (5,000 bushels) for $3.00 per bushel, for October delivery. Your dad receives $15,000 (minus commission) and must deliver the corn in October.

Corn prices could fluctuate wildly during the summer if there was a drought or bumper crop. Yet your dad doesn’t worry; he already sold those 5,000 bushels for $3.00 and pocketed the money. 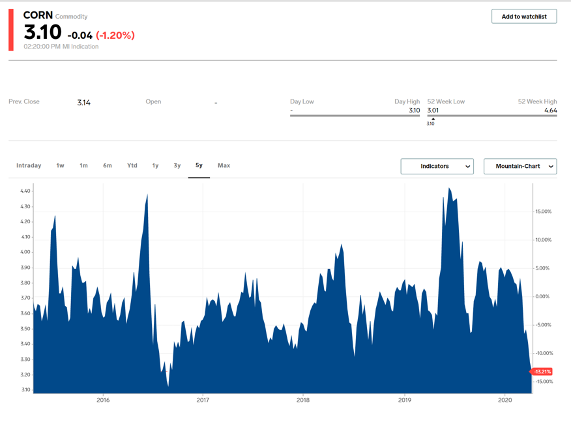 The buyer has some other considerations. Futures contracts can be bought on margin. The buyer can put up as little as $750 and borrow the rest from his broker. They can sell the contract or hold it and accept delivery.

Futures contracts are bought and sold regularly. Billions are made and lost by speculators who have no intention of taking delivery. A few days before the 25th of the month, prior to the delivery month, contracts expire. The person holding the contract after the cutoff must take delivery. Generally, they end up with a company capable of accepting delivery. No commodities trader wants to see six trailers dumping 5,000 bushels of corn on the driveway.

Did your dad ever listen to Orion Samuelson and the WGN farm report?

JM: Sure, all the farmers did. They kept track of weather, grain prices, and farming issues.

DM: Farming is a risky business. Farmers must not only produce their crops, but also do everything they can to get the best possible price. Commodity prices are based on supply and demand and they want to sell into the market at the right time.

JM: Daddy put the grain in huge storage bins and would watch the market prices. He said you want to avoid selling when everyone is harvesting their grain because supply is high. Sometime between harvest and spring planting, trucks would show up and the grain would be sold.

DM: Now, about your question. The same holds true in the oil industry.

Simon Constable at Forbes tells us, The Real Reason Oil Futures Plunged On Monday Isn’t What You Think. It is similar to what I outlined about grain futures:

“On the face of it, things look bad for the oil market.

…. But the bigger story is far more complicated than most would like to admit.

Most of the issue revolves around oil delivery rules and storage capacity issues specific to a single location in Oklahoma.

Futures prices for light sweet crude oil, which is commonly known as West Texas Intermediate (WTI), plunged approximately 40% Monday to around $11 a barrel, a 20-year low.

…. It’s made fascinating by the fact that the drop in the futures prices over a few hours came just days after an agreement from OPEC (The Organization of the Petroleum Exporting Countries) to slash crude production by a whopping 10% of global output. Significant production cuts would tend to lift prices, and yet the opposite happened.

We have only to look at the price of Brent crude, the widely-used European benchmark, to see that things aren’t so bad after all. Prices for Brent futures fell around 5% Monday to approximately $27 a barrel.

Why the plunge in one futures price but not the other?

Alexander Burgansky, head of oil & gas research at Renaissance Capital, says the matter comes down to the way that WTI futures contracts work and the lack of oil storage capacity available in Cushing Oklahoma.

…. WTI May-dated futures contracts…require futures buyers to take delivery of the oil in Cushing. But given that there is little if any storage space available in that location the traders are ditching their contracts, Burgansky explains.

…. The flexibility of the Brent futures contract means that lack of storage in one place isn’t forcing traders to dump futures contracts in the way that it is with WTI futures.”

Why no negative rates at the gas pump?

Crude oil has to be refined and delivered adding to the cost.

Never forget all levels of government tax the retail sale. I’m sure some government bodies see the current low prices as an opportunity to raise taxes. Grab the savings before it can get to the consumer.

JM: Hmmm…I can see why they were scared; 1,000 barrels of oil poured all over your front yard would be a mess. You’d have an army of environmental protesters screaming at you.

DM: I asked an industry insider about that. If a speculator refuses to accept delivery, it is a breach of contract. While it can be settled with money, he pointed out the penalties levied by the exchange for not taking delivery are huge, and they could be kicked out of the exchange. That is why those “ditching their contracts” were paying as high as $37/bbl. to ditch them.

Chuck Butler suggested, “I look behind the curtain.” He sent an article by Ted Butler (no relation) at SilverSeek.com, Common Sense and the CME Group:

Data from the most recent April Bank Participation Report (for positions as of April 7), indicate that…US and foreign commercial banks held a gross short position of 607,743 contracts or 25.9% of total open interest. Since commercial banks held such a large share of the short position in NYMEX crude oil contracts, it is reasonable to conclude they were among the biggest winners in the spectacular oil collapse. The question is whether the big banks were just lucky to be in the right place at the right time, or had much to do with the spectacular collapse?”

Same story, different commodity. These banks are the same culprits who have been caught rigging the currency and metals markets, so who knows what is really behind the collapse.

JM: Wow! The futures market is risky. I understand why you call them speculators and risk-takers. You mentioned earlier that OPEC cut production which should raise prices. A lot of wells are being shut down.

Shouldn’t oil prices rebound? Are there less risky ways to profit from that if/when it happens?

DM: Speculators expect spectacular profits, and take great risks to get them. That is not for anyone who’s primary concern is preservation of capital.

Our article, Are Energy Stocks A Good Buy In Today’s Market? addresses that question.

When I was with Casey Research, our model portfolio included an exchange-traded fund in the energy sector, XLE. In the article, I discussed this with our former analyst and decided to buy some while the market is down.

We may see some wild swings before things settle out. I don’t anticipate spectacular gains like the highly leveraged futures traders do. If we are patient and can keep our emotions in check, I think this will be a good one.

Friend Fred M. reminds us that 2020 will be remembered for a roll of toilet paper being worth more than a barrel of oil. Crazy!

Last week they had the big Air Force flyover here in Phoenix. It coincided with my 80th birthday. I thought flying over my house to celebrate would be a nice gesture. I stood outside in 98-degree heat for an hour but never saw them, they must have forgotten the address. 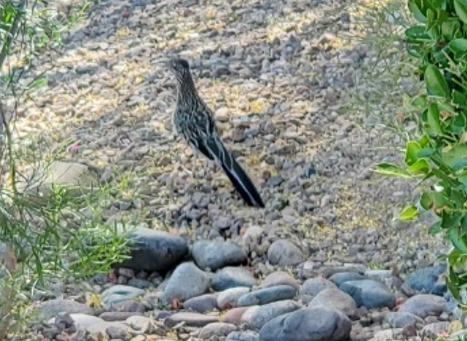 I did see something cool, a Road Runner. This little critter hung around with me for 15 minutes. I kept looking for Wiley Coyote but he was nowhere to be found.

As he ran by the fence, he was hard to see because his color blended in with the desert floor.