If You Continue With The Same Behavior, What Should You Expect? 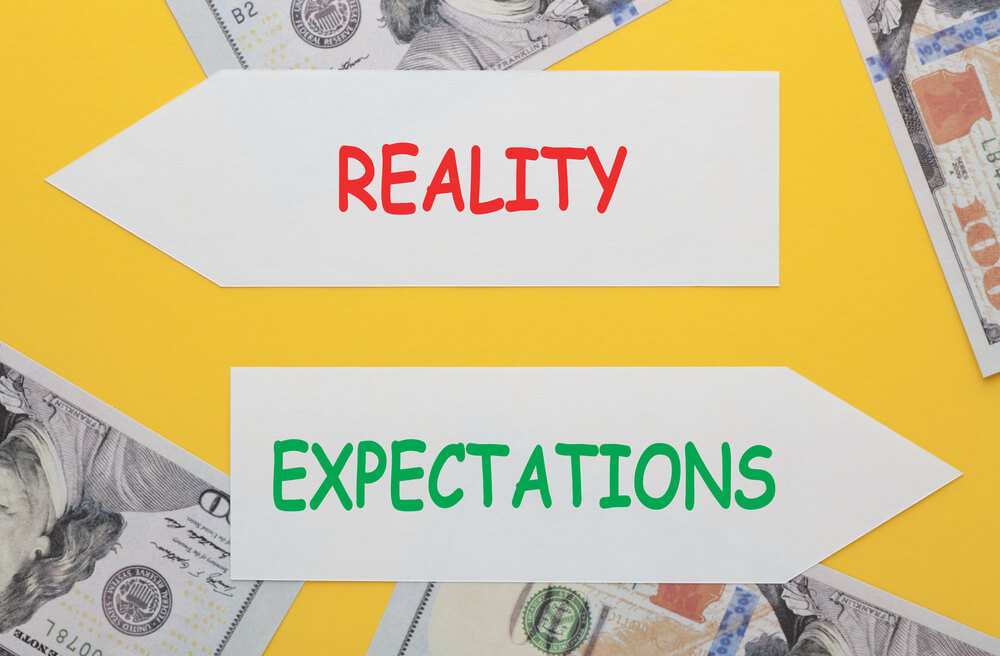 One of our earliest childhood lessons is how reward and punishment molds our behavior. If we are good, we get rewarded, if we are bad, we get punished – plain and simple.

“If doing the same thing over and over and expecting a different result is a definition of insanity, expecting people whom we overwhelmingly rewarded for acting in one manner to change that behavior is more than a bit naïve, as any parent knows or finds out quickly.”

What if the situation is reversed? What if you were rewarded for lying, cheating, and stealing?

“They say the definition of insanity is repeating the same action and expecting a different result. By that measure, Congress has lost its mind.”

Congressional behavior is totally predictable. Members of Congress are “overwhelmingly rewarded” for looking after the interest of those who reward them, directly and indirectly. Come election time, they try to create the illusion they are fighting for the little guy, not the big donors and lobbyist groups.

One of the main beneficiaries of congressional folly is the Federal Reserve and their member banks.

I got a note from Chuck Butler about our article, “The Fed Always Runs To Save Wall Street:”

“I’ve said all along that our economic problems were happening long before the Covid-19 virus. There is an underlying problem that no one wants to admit – or address. If our nation doesn’t address it, expect the Fed to bail out the banks for the third time in the next few years!”

It’s time for Chuck to explain….

DENNIS: Chuck, once again, thank you for your time. Your comments about our economic problems happening long before the Covid-19 virus were well documented by Wall Street On Parade (WSOP) here and here. Their timeline begins in August 2019 and ends the day the virus became a problem.

You mentioned “long before” the virus. When did you start alerting your readers?

CHUCK: Dennis it is always my pleasure to talk to your readers. Let’s see…

Well, on September 16, 2019, I said, “But I do believe in my heart of hearts that interest rates will go back to zero, and maybe even negative, and QE, or bond buying will resume… Talk about losing the rest of the credibility that the Fed has when this happens!”

I was regularly pointing out the Fed’s daily injections of liquidity to the repo market, and wondering why this wasn’t a big deal to the markets. We eventually found out that the banks weren’t as “solid” as the Fed Heads kept telling us they were, but the Fed Heads blamed all the problems on the pandemic.

In January 2020, I explained how the lack of earnings by individuals were going to be a strain on our economy that depends on consumers to do the heavy lifting via spending. When the economy shut down, and all those workers stop receiving their paychecks, that lack of earnings caused people to cut back on their spending.

Most of these people had no savings to fall back on. It was not a knock at the earners, but rather the earnings/ wages, lack of depth. Dennis, as you know, when times get tough, it is back to the basics, food & shelter – needs and wants become very clear.

DENNIS: Regardless of when the problems became visible, it took trillions to bail out the banks once again. Why is the Fed trying to tell us they were healthy coming into 2020 and all their problems are a result of a virus?

CHUCK: Good question. You have to string a few things together. Throwing the public and Congress off the scent of a major problem is the way the Fed has tried to get this done. Eventually, someone with some gray matter will figure it all out, and it won’t be pretty.

The Fed has blamed all their money creation and bailouts of corporations and banks on the pandemic. They do this to create an illusion. Why? To keep Congress from asking the difficult questions about why are we going through this bailout event again 12 years after we had one that was supposed to have “fixed the problem”

The Fed can’t have Congress doing their job of “congressional oversight” and finding out that their programs are worthless! So, they blame it all on the pandemic!

DENNIS: Bill Bonner said, “The Feds bailout is a crime. It is the grandest larceny in the history of the world.” Do you agree with him?

CHUCK: I don’t know if this is the grandest larceny of all time, but it’s right up there with whatever is! The government debt in this country has gone straight up and off the page! And we just keep adding to it, as if it’s no big deal.

And now we’ve gone to bailing out corporations and all their debt! (That also rewards bad behavior.) The Fed’s bylaws prohibit them from buying corporate stocks and bonds, and during this spring we’ve seen them do both! Where is Congress? Shouldn’t someone be asking the question of: If the economy was as strong as you said it was pre-pandemic, why do you need to buy corporate bonds and ETF’s now? The Fed is breaking the law and congress, so far, is letting them get away with it.

“If Congress does nothing, the banks will still eventually collapse, the market will see to that.” I even wrote a silly lullaby.

Rock-a-bye-bankers, on the world top.

When the truth shows, your cartel it will rock.

When the buck breaks the markets will fall.

Down will come bankers, once and for all.

Four years later, the truth is being suppressed and, unfortunately, Congress did something; they spent trillions of tax dollars bailing out the banks once again; rewarding terrible behavior. In 2008 they told us they fixed it. Isn’t continuing the bailouts insanity?

CHUCK: I believe that the bailout sizes will continue to grow. With each bailout, the problem grows, which will require larger bailouts the next time.

It’s a lot like what I used to talk about when the deficit began to grow like a weed. In the early 2000’s I told people that this deficit problem was going to get larger and grow at a faster pace. Unfortunately, I was right, no one kept a lid on the budget deficits. 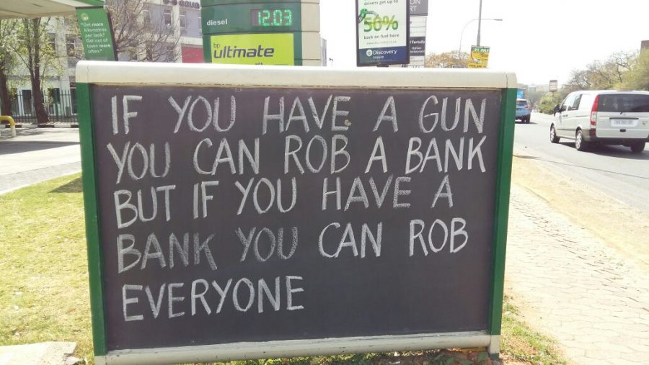 If adding 130% to our debt in 8 years to bail out corrupt banks isn’t insane, I don’t know what it.

DENNIS: To get a different result, congress must change their behavior before the banks will change. What has to happen?

CHUCK: For starters, Congress needs to cover up their collective yellow bellies and reinstate the Glass-Steagall Act, which prohibited banks and brokerages from joining together. Today we have what I call Casino Banks, which are banks merged with brokerage houses. There’s a good chance that bank deposits are being used to fund the risky trades of the brokerage house. Instead of bailing them out, Congress must let the brokerage side fail while protecting depositors.

DENNIS: One final question. They couldn’t even get a bill through congress to audit the Fed. Do you really feel that Glass-Steagall could be reinstated?

CHUCK: I’d like to think that our elected representatives could muster up enough courage to do something like that. But if they can’t, we, as Americans need to vote in new representatives, and if we find that the new representative is yellow-bellied too, then we vote in a replacement and keep doing this until we get it right.

It might take Carter type inflation, but it has to happen. The future of our country depends on it.

That is why the fed is trying so hard to blame all this on a virus. If it doesn’t get done, bailouts will be even bigger, more frequent, and continue to destroy our economy. When the bankers end up with all the money in the Monopoly game, there will be serious consequences.

Everyone must flood their congressional representatives demanding reinstatement of Glass-Steagall.

Dennis, thanks again for the opportunity to address your readers….

Dennis here…. I knew the debt was growing, but 130% over 8 years was surprising. The youngest baby boomers will be 60 in 2024. With the current social security shortfall, those debt projections may be low.

This entire mess is insane! Congress and the Fed MUST change their behavior.

As the Huffington Post said, “Expecting people whom we overwhelmingly rewarded for acting in one manner to change that behavior is more than a bit naïve….”

Chuck said privately, all we can do is hope to educate as many readers as possible and hope they spread the word. Voters are going to have to be stern parents, because congress and the Fed MUST change for our country, as we know it, to survive economically. They will resist; we must prevail. Stay tuned!

For a three week stretch, around 6:00 PM a family of five owls would visit. They had pool parties in our birdbath. Jo cleans it out daily, adds water and we watch God’s creatures splash, drink, and play. 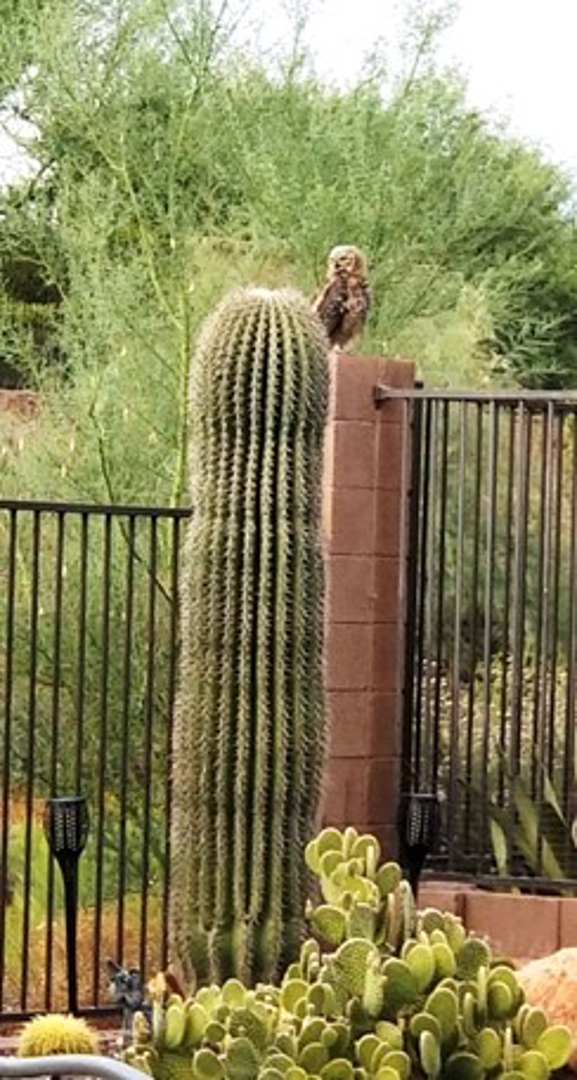 When the owls are done they sit on the back fence and dry off. We asked them to get close together for a family photo, but they don’t cooperate. I enjoy watching them. They are majestic birds with beautiful wings.

Owls are messy critters and leave more than their share of residue. Jo finally bought a long handle wire brush to use for cleaning. She was very proud, the birdbath was clean, fresh water and looked good. Unfortunately, two days later the owls stopped coming.

Thanks to all the kind readers who sent a note after our “Who’s Betting On America?” letter. A lot of people are frustrated with what is going on, but still believe in our country.

Friend Henry M. sent this along: