If you do business with organized crime – Be Careful! 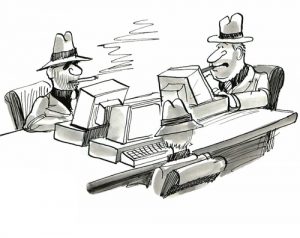 When we last checked, since 2009 the top banks had been fined a total of $204 billion. Bloomberg now reports, “Wells Fargo’s $1 Billion Pact Gives US Power to Fire Managers”:

“The settlement covers issues in Wells Fargo’s auto-lending and mortgage units. The bank revealed last year that it had forced unwanted insurance on customers who took out car loans….”

Fines are just part of the cost of doing business:

“Still, investors appeared relieved…as shares advanced 1.8 percent to $52.44…the best performer in the 24-company KBW Bank Index. The settlement should remove one overhang from the shares, especially since the penalty isn’t as bad as some analysts had anticipated….” (Emphasis mine)

“…. Just when you thought all of the various Wells Fargo scandals had been settled, or at least known about, comes word that the Labor Department is investigating the bank for allegedly pushing holders of lower-cost 401(k) plans it manages…pressuring them into buying the bank’s in-house funds.”

Meanwhile, Congress is “moving closer to passing joint legislation that would roll back parts of the Dodd-Frank law and ease regulations on small and medium banks.”

In 2016 I asked, “Should Trump get elected and try to rein them in, are the banks that confident they have bought enough members of Congress to protect their gravy train?” Maybe we have the answer.

In February, MarketWatch updated the scorecard:

“Banks have been fined a staggering $243 billion since the financial crisis.” 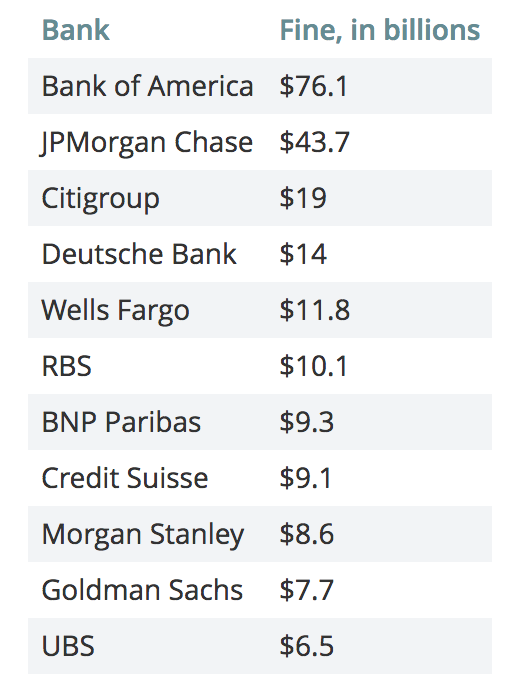 Add another $1 billion to Wells Fargo – they are still pale in comparison to the top three.

Where the power is

Forbes reports, “The Five Largest US Banks Hold More Than 40% Of All Deposits.” (The top five are JPMorgan Chase, Bank of America, Wells Fargo, Citigroup and US Bankcorp. Approximately 6,500 banks make up the remainder)

“Total deposits for the five largest U.S. banks have grown by 4.3% over the last twelve months – above the industry-wide growth figure of under 4%. This is a commendable feat by these banking giants…. This represents a share of more than 40% of the…. U.S. deposit market and this figure is likely to trend even higher as the largest banks continue to outperform the overall industry.

…. With the Fed hiking benchmark interest rates…the interest rate environment has finally begun showing signs of improvement. This, in turn, has tempered the deposit growth rate over recent
quarters. (Emphasis mine)

…. JPMorgan’s particularly strong growth figure of 7% over the last few quarters helped it become the largest bank in the country…surpassing Bank of America, which has held that position for more than two decades….”

“While Wells Fargo’s image is in tatters – and will likely remain so for some time…. The 2017 survey revealed that the banking industry overall extended its multiyear reputation recovery among U.S. consumers, achieving a reputation score that qualified as “strong” for the first time since the Survey of Bank Reputations began in 2011.

Simply put, banks are acting more responsibly with customers – no longer processing transactions in a way that will more quickly trigger overdrafts, for example. …. And these efforts are paying off in higher reputation scores.

Of the 39 banks evaluated in this year’s survey, more than half of them received “excellent” marks from their existing customers, up from just under a third of the banks in the 2016 survey.

The top five banks rank “average” or below.

JPMorgan, Citibank, Bank of America and Wells Fargo were fined over $150 billion for illegal activities while paying their executives billions in bonuses along the way. As they have no fear of being jailed; expect their behavior to continue.

Reuters recently reported, “Largest US banks still ‘too big to fail’: Minneapolis Fed study”. If they falter they can count on the taxpayers to bail them out once again!

There is a better way!

Deposit growth has slowed, now they must compete for deposits. Might they consider treating retail customers fairly? Don’t bank on it! (pun intended)

When handling retirement money, bank professionals are (theoretically) held to the fiduciary level of responsibility – meaning they must put their clients’ interests ahead of their own. Expecting the big banks to behave ethically is asking them to perform an unnatural act. Don’t be fooled! They have shown us their true colors!

Be a good shopper

Shortly after Jo and I were married, I began looking after her mother’s (affectionately called grandma) financial affairs. Grandma held Certificates of Deposit (CD) in several local banks. Over time, Bank of America gobbled up most of these banks.

I received a letter about a maturing CD – they would automatically roll it over at a rate that seemed low to me at the time (4%). I called the bank. The local manager said, “Since you asked, I’m authorized to raise the rate by ½%.” I told her to close out the CD and send us a check.

She was shocked! I asked, “How many other elderly seniors, who need the money, are you ripping off?” She said she would mail the check and promptly hung up. While ½% more may not sound like much, it was 12 ½% increase above the first amount. How many years had grandma been getting lower than market rates? That’s not looking after your good, loyal customers.

When I deposited the check in grandma’s brokerage account I told her broker what happened.

Get with the times!

At the time, most seniors shopped CD rates in the paper and bought them locally.

Today you can go online and buy CDs through your broker. You can quickly compare rates all over the country. I found dozens of CDs paying more than the local banks. While price fixing is illegal (wink-wink!), banks in Florida were ripping seniors off!

Wolf Richter wrote a sad, but hilarious article, “I Asked my Wells Fargo Branch about CDs with Higher Interest Rates. This is What Happened Next”:

“Competition for cash is returning for the first time in 9 years, and banks hate it.”

The article seemed so extreme I decided to check it out myself.

I found current CD rates on the Wells Fargo website. I was required to enter my zip code. Are they lower in FL or AZ? Why should that make a difference? If I want to lend them money, I want the best rate.

Here are the “Standard CD rates”:

I then checked my online broker and was quickly shocked:

With the click of a mouse, I could buy a 13-month Wells Fargo CD paying 2 1/4% interest, payable MONTHLY! That is 15 times more than the rates on the Wells Fargo website. No wonder they get bad grades, they are ripping off their local customers.

As interest rates rise, CDs will offer better rates to those who take their time and shop. There are over 6,000 banks to choose from. Internet shopping has never been easier, and that includes borrowing and/or lending money.

Most accounts are paying a fraction of 1%, not even close to keeping up with inflation. My broker offers one-month CDs paying about 10x the interest of a cash account. Ladder them properly and you can have one mature each week!

I don’t do business with any of the criminal banks. If you do business with them, put them in a competitive environment and demand the best deal. They don’t know how to compete on a level playing field.

They make famous bank robber, Willie Sutton look like a piker. The banks have turned into the robbers! At least Willie got thrown in jail. Take your time and protect yourself from being ripped off!

I want to take a minute to thank our readers for their support. Many have been kind enough to donate and use our link to Amazon for their shopping – it helps a lot. We are committed to keeping our website FREE. Reader support helps turn an inexpensive hobby into an inexpensive one. Thank you all! 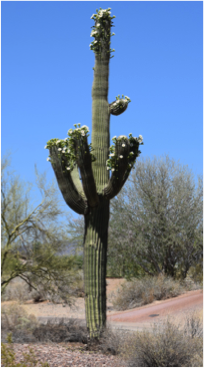 Just before leaving AZ, we photographed one of many large saguaro cactus on our main boulevard. We have never seen blooms on the large cactus to the degree we saw this year. When you look at them closely, they almost look like daisy flowers. When we return, they will be long gone and the temperature will be in triple digits.

The blooms turn into pods and fall to the ground. We gathered up a few and planted them in our flower bed. We are wondering/hoping to see if any sprout by the time we return. At the local nursery, the saguaro cactus is generally priced at $100/foot; having some young sprouts could be a good venture.

When we arrived in Indiana, the corn was just beginning to peek through the ground. With the good rains, the field next to the house has grown around 4″. In this part of the country, corn is likely to be well above knee high by the 4th of July.

Last month many people met with their accountants as they filed their taxes and updated their retirement accounts. Good friend Phil C. sent along this week’s humor regarding retirement planning. 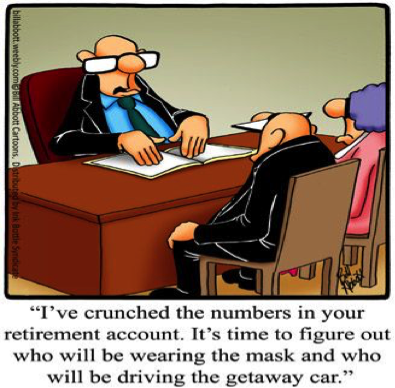