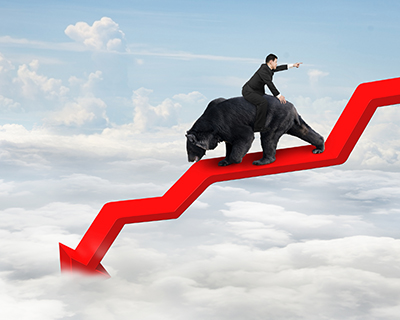 And if anyone gets in the way of inflation… the ‘active shooters’ – in both the private sector and the public sector – start gunning for them.

Last week, Treasury Secretary Janet Yellen came under fire for saying she might have to raise interest rates.

…. There is no real chance that the Biden team will let deficits stand in the way. They’re just going to rename them ‘investments.’

…. Even Joe Biden is likely to get the message: Deficits are a good thing.

The flagging economy will need ‘fiscal stimulus,’ the experts will say.

And that means money-printing.

Remember when Fed Chairman Ben Bernanke mentioned the Fed might “taper” bond buying? Reuters reported about, The markets and Bernanke’s ‘taper tantrums’. Any hint of the Fed reducing stimulus money for the banks is immediately attacked.

Today’s market is a Fed-induced, all-time high bubble, waiting to explode. For over a decade, Congress and the Fed used real and imaginary threats to flood the system with trillions of questionable dollars in stimulus packages.

Meanwhile, prices are soaring through the roof, the consumer knows it and soon there will be pressure on Congress to “do something.”

…or do they do nothing?

The Balance offers some great insight into former Fed Chairman(1979-1987) Paul Volcker and his legendary battle to bring down inflation:

“Volcker knew he must take dramatic and consistent action for everyone to believe he could tame inflation. President Nixon had contributed to inflation by ending the gold standard in 1973. The dollar’s value plummeted on the foreign exchange markets. That made import prices higher, creating inflation.

Volcker fought greater than 10% annual inflation rates with contractionary monetary policy and courageously raised the fed funds rate to 20% in March 1980. He briefly lowered it in June. When inflation returned, Volcker raised the rate back to 20% in December and kept it above 16% until May 1981. That extreme and prolonged interest rate rise was called the Volcker Shock. It did end inflation. Unfortunately, it also created the 1981 recession.”

Many feel Volcker was deeply concerned about hyperinflation. With the USD no longer backed by gold, he raised interest rates to make the USD attractive to the rest of the world.

Changes since the Volcker years

I remember those tough times well. Citizens were up in arms. Prices skyrocketed! Taxpayers moved to higher brackets when their real buying power did not increase. A law was finally passed adjusting tax brackets for inflation.

Inflation riders were also added to Social security and other government promises, theoretically allowing pensioners to help keep up with soaring prices.

Soon the Bureau of Labor Statistics was encouraged to change its method of calculating inflation, for the benefit of the government.

John Williams at Shadowstats provides us with a graph, calculating inflation in the same manner it was during Volcker’s tenure at the Fed. 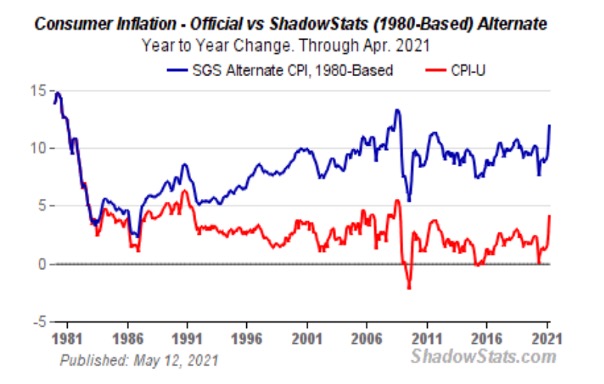 If the government did not gerrymander the calculations, our current inflation numbers would be quite close to the numbers Volcker was faced with in 1975.

As we recently reported in an interview with international expert, Urs Vrijhof-Droese:

“The huge stimulus packages, with the possibility of more to come, raises concern about the ability of the USA to cover their debt …. The high debt will negatively impact economic growth in the US.

Also, Asia and Russia have a problem with the USD being the global reserve currency. According to the WSJ, the USD’s share of global reserve moved to its lowest level since 1995….”

What would Volcker see today? Inflation sharply jumped to double digits, the world is losing interest in the USD as a reserve currency, and we need to find ways to stop inflation quickly or it will spiral out of control.

The biggie no one wants to mention!

The Federal Reserve is owned by the big banks, just like it was during the Volcker years. However, one major thing has changed.

During Volcker’s tenure, the banks’ primary source of income was from the banking business. They accepted customer deposits and borrowed money by issuing CDs and other debt instruments – paying interest for the use of their capital. Banks would lend those funds and more (due to fractional banking rules) at higher interest rates; they made their money on the spread.

Chuck Butler, a real banking expert, says the normal spread was around 5%. In times of rapidly raising rates, banks would do several things to increase the spread. They would raise loan rates faster than interest rates paid to attract their working capital. When rates reversed, they quickly dropped interest paid for capital, while holding loan rates high. They expertly “gamed” the system to maximize profits.

Bankers knew rates would eventually come down and borrowers would refinance at lower rates as soon as they could. They charged preposterous “loan origination fees” and other upfront loan costs to increase their profits. If you sold your home, you were likely required to pay “points” toward the buyer’s mortgage origination fees.

My parents saw the buying power of their nest egg drop dramatically. With three teenagers in the house, our living costs skyrocketed. Living through those challenging times leaves a mark.

The biggie? Mr. Volcker’s management (big banks) would not be severely hurt and could rake in more profit when he increased rates to make the USD more attractive to the world.

In 1933 the Glass-Steagall Act was passed to protect the public. Banks were required to hold ample reserves and their loan portfolios were regularly audited. High-risk loans and investment operations were not allowed by FDIC-insured banks. Interstate banking was not allowed, no bank should ever be “too big to fail”.

When the law was repealed in 1999, we saw a flurry of bank mergers and acquisitions; the big banks gobbled up thousands of smaller banks. Big brokerage firms also merged with banks into what we now call “casino banks.”

The major banks that own the Federal Reserve are no longer in the banking business as we once knew it!

Today their primary profits come from investment and brokerage operations. The top banks control much of the wealth of the nation, earning fees from investors. Their high-risk derivative exposure is in the trillions – all under the FDIC umbrella.

Note the sharp drop in the Fed funds rate shortly after Glass-Steagall was repealed in 1999. Who benefits the most from that? The banking system and government; the largest debtor in world history.

Had the government not dropped interest rates to historic lows in 2008, savers, pension funds and 401ks would be worth trillions more today.

Let’s not kid ourselves!

Expecting another Paul Volcker to appear is foolhardy. The Fed ownership and government would not allow it. Raising interest rates will cost the government billions in additional interest and the casino banks even more in lost revenue.

One change since the Volcker years is the ability of government officials to “jawbone” the world into believing that changes are taking place. Janet Yellen mentions the possibility of raising rates, (from maybe .25% to .5%) and we see a hissy fit. As Mr. Bonner said, the “active shooters” in the public and private sector start gunning for them; and the comments are quickly backtracked.

My first thought when reading Bonner’s headline, “Inflate or die” was likely one he didn’t anticipate. When he added, “active shooters” I stopped – “Is this a double meaning?” If I were the current Fed head, I would be leery of any new people assigned to my security detail. The big boys have much to lose if the Fed raises rates.

This George Bernard Shaw quotes sums it up well:

Gold and metals stocks outpaced inflation during the Carter years and is likely to do so again. Gold has stood the test of time!

I hope everyone had a great Memorial Day weekend. When I did my time in the military, I was too young for the Korean conflict, and honorably discharged before the Vietnam war got hot and heavy. I go to veteran’s events to honor those who were not as lucky as I was and pay them my utmost respect.

When we arrived in Indiana in mid-May, I mentioned we were seeing crops barely peeking out of the ground. We had a couple days of good rain and I’d swear the corn doubled in size overnight. A few days later Jo leaned out the car window and took this photo, the corn is already over a foot high.

The old saying, “knee-high by the fourth of July” does not apply to this part of the world. With ample rain, in another month it will be much higher. Farmers further north plant their crops later and it might be true for them.

“The great merit of gold is precisely that it is scarce; that its quantity is limited by nature; that it is costly to discover, to mine, and to process; and that it cannot be created by political fiat or caprice.” — Henry Hazlitt

Friend Tom G. supplies us with some humorous comments this week: