Investing With Time Remaining On The Clock 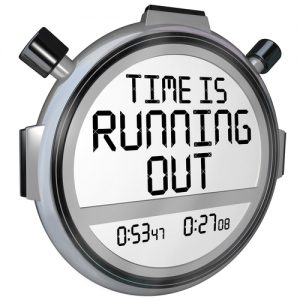 Jo and I were watching an exciting hockey game between our favorite team (Tampa Bay Lightning) versus the Philadelphia Flyers. Tampa had a 3-0 lead with six minutes left on the clock. The referee sent a Tampa player to the penalty box. For those unfamiliar with hockey, the penalty box is an adult “time out”, the player is sent to a room.

We were surprised as the Flyers pulled their goalie, leaving their net unprotected. They had six attackers, matching up against four defenders in front of our goalie. Jo asked, “Why did they do that with so much time left?” Before I could answer, Philadelphia scored. They took a huge risk and it paid off.

Hockey Wildness reports on a study that concludes “… a goal is likely to happen 1 out of every 3 times a goalie is pulled for the extra attacker ….” They add, 70% of the time the goal is scored into the empty net – meaning the strategy backfires and you fall further behind. The risk is reasonable when you are behind late in the game, but the odds are stacked against you.

Tampa scored again and went on to win. Regardless of the outcome, there are times you are willing to take the extra risk.

Unlike baseball or football, which generally has deliberate changes from offense to defense (accompanied by a commercial break), a hockey game is constantly switching from offense to defense in a split second. Earlier in the game, Philadelphia had a one-man advantage, Tampa stole the puck and, in a matter of seconds scored a short-handed goal.

As we talked, I realized that hockey and investing strategies have much in common.

There is a game clock. A hockey game is 60 minutes long. If the score is tied, you go into sudden-death (I won’t go there) overtime. In life we have a biological game clock, however, most people don’t know when it will expire. We want to live a long healthy life and beat the longevity odds.

Sometimes we may take a big risk to stay in the game. When Jo and I were married, I was approaching 50. I was broke – but earned a good income. We bought an inexpensive home and had to pay mortgage insurance because we didn’t have an adequate down payment.

We learned of a bank that was a great takeover candidate. I said, “I’m either going to catch up with my age group, or we will probably live very frugally for the rest of our lives.” Like the hockey coach who pulled his goalie, it was very risky, but we felt we needed to get back in the game.

We bought as much of their stock as we possibly could. With each paycheck we bought a little more, and even some on margin. We anticipated holding the stock for around a year. After three years of worry and sleepless nights, it finally happened.

We were lucky, we paid off all our debts and had some investment capital left over. We vowed, “never again!” The risk and stress paid off but we knew we could never afford to take another risk like that again.

Long and short-term strategies are similar. While a hockey game has an ebb and flow as teams move up and down the ice, there is still a big picture overall strategy.

If you have a lead, you become more deliberate, content to let the clock tick while avoiding mistakes and unnecessary risk. If you are behind, you pick up the pace.

As we move along life’s timeline, those fortunate enough to accumulate investment capital certainly understand the old saying, “At this point in life I’m more concerned with return of my money, than return on my money.” You become a more cautious, defensive investor.

How do we know if we win?

Keep the goals of retirement investing in the forefront:

Whether you have a pension, 401k, IRA or a combination, most people want “guaranteed income” for the rest of their life. It breaks down into several components.

When life’s time clock expires for both spouses, if you can comfortably say all three objectives were met, you won – you did good – you stayed in the game and enjoyed life. While downsizing isn’t all bad, becoming dependent on others for financial support is terrifying.

“It’s not being bored, unable to travel or even death itself that scares older Americans most about retirement – it’s running out of money.

Some 43% said their greatest fear about retirement was outliving their savings and investments, making that the top fear – over loneliness, boredom and even declining health, … according to a survey … by the Transamerica Center for Retirement Studies.

…. 57% of financial planners said that running out of money was the top retirement concern (based on) … a survey released … by the American Institute of CPAs ….

More than six in 10 baby boomers feared running out of money before they died more than death itself … (based on) a survey by financial firm Allianz.”

Strategies are constantly changing – most people must play the game prudently until the very end.

If you are reading this, you are still in the game – good judgment, prudence and some good old-fashioned common sense can positively affect the outcome. Never give up and enjoy the ride! 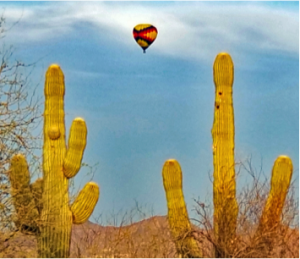 Our sky is filled with beautiful hot air balloons in the springtime here in the Arizona valley. We look to the west in the early evening and have seen more than a dozen at a time with their majestic colors and designs.

Friends Bob and Sarah O. took us out in the desert to a cool burger place called Wild Horse West. Jo took this shot from the car in the early evening as we were leaving the parking lot.

I really enjoy the solitude and beauty of hot air balloons. As a former pilot, it’s interesting to see vans pulling small trailers through the desert chasing them. The pilots always seem to avoid the cactus and find a clearing to land.

As the clock ticks on, friend Courtenay W. shares this. Poof, go the words of our youth, the words we’ve left behind. Where have all those phrases gone?

I’ll close this week with one of my all-time favorites: