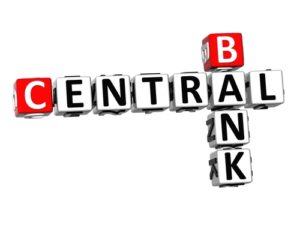 “Given the fundamental factors in place that should support the demand for housing, we believe the effect of the troubles in the subprime sector on the broader housing market will likely be limited.”

Soon after, the housing market crashed due to subprime loans.

Chuck supplies facts and lets us arrive at our own conclusions:

“So, let’s look at the Fed’s track record, shall we? Did you know that in 105 years, the Fed has never accurately forecast a recession?

Hey! I don’t make this stuff up, folks! Or that the current running total is nine straight annual economic forecasts that they’ve had monumentally incorrect?

I’m an avid reader of Chuck’s FREE Publication, (highly recommended) “The Daily Pfennig”. Chuck has been calling BS on central bankers worldwide and is generally spot on – even if it means going against “conventional wisdom”. He calls them as he sees them, offering common sense and logical reasoning supporting his position.

Central Bankers write with tea leaves, hints, and vague wording. Unfortunately, investors put way too much faith in their often-deceptive remarks. This can have a major impact on financial markets.

Chuck mentions several calls he made correctly. What grabbed me was I remember when he made them. In one case I acted on his advice and did well.

Time for an interview. I asked him to share some of his secrets for accurately reading the tea leaves, and not being fooled.

DENNIS: Chuck, welcome back. You know you are one of our readers’ favorites. Today I want you to educate our readers about central bankers. We don’t want readers to be deceived and lose a lot of money.

Let’s start with your story about Mark Carney and the Bank of England. You pegged him right from the start.

CHUCK: Before we begin, Dennis, thanks again for allowing me to speak to your readers.

This saga of Mark Carney began when he was the Governor of the Bank of Canada (BOC), their Central Bank. Shortly after the 2008 financial meltdown, countries around the world began to pull themselves up off the canvas, and resume normal monetary policy. Mark Carney believed that Canada was ready for prime time. He began telling reporters and the markets that he would soon be removing accommodation, which is central bank parlance for raising interest rates

As expected, when a Central Banker talks hawkish, currency traders take heed and soon the currency of the country begins to rally – and so it was with the Canadian dollar/loonie.

But I wasn’t fooled, and told my readers, in my daily letter, “A Pfennig for your thoughts” not to get caught up in this circus, that the C$’s rally would be short-lived.

When Mark Carney left the BOC to become the new Gov. of the Bank of England (BOE) in 2013, Canadian interest rates had still not been raised. So, I said, “Mark Carney took his bag-o-promises with him to England”.

In 2015, Mark Carney was again talking about removing stimulus and hiking rates in the U.K. – and the pound sterling rallied. Once again, I told readers that this was all a game for him. To this day interest rates have not been hiked in the U.K.

Why didn’t I believe him?

1. He had led the markets on before and was doing it again

2. The U.K. had accumulated so much debt, that I just didn’t see the economic growth that would warrant a rate hike

DENNIS: Sometimes you give central bankers some wiggle room, mentioning their models are out of date; things like that. Is it possible they make some of the remarks attempting to manipulate a market in their favor so they don’t have to act?

I laughed the other day when I heard the head of the NYSE talking about the composite’s performance and how the stock market was so strong based on the economy.

He didn’t mention the 6 years of Quantitative Easing and almost 10 years without a rate hike by the Fed!

DENNIS: A few years back you called for the Euro to rise. I jumped on that and “thank you”, things worked out well.

With the Fed signaling they are going to continue to unwind debt and raise rates at the same time, what do you see on the horizon?

CHUCK: The Fed’s allowing Treasuries to mature without reinvestment and, at the same time the Fed is hiking rates – it’s like dual rate hikes.

The Fed’s too close to see what’s going on… yes, the 2nd QTR’s GDP topped 4%, but as I told my readers, it’s going to be like a star that’s burning out. It’s the one that shines the brightest! July economic data is already showing signs of weakness, and we’ll begin to see slower economic growth – until it stops. That’s a result of bad timing of their rate hikes, both physical and theoretical…(Rate hikes and balance sheet unwinding)

DENNIS: What are the keys you look for when trying to decipher messages from central bankers?

CHUCK: Boy, I wish I could give you a definitive answer, but I don’t really have one. Basically, I watch for changes in the Fed’s Meeting Minutes from one month to the next. A simple word change or phrase will tell me that’s something is up. I wish I had more here; it’s really pouring over each tea leaf!

DENNIS: In a recent article you mentioned the president has been criticizing the Fed:

“…. The President had broken the trend of sitting Presidents to not talk in public about the Fed…. And there was some wobbling of the dollar…. (Recently) Trump went full bore on the Fed, talking about how their rate hikes were hurting the economy, and he wished they would stop hiking rates.

…. He said that he was going to continue to criticize the Fed if they continue to hike rates….

…. Trump wants a cheaper dollar to help with the exports that are getting tariffs added to them…. But that wasn’t happening because of the Fed Rate Hikes….”

I prefer to avoid partisan politics, readers can find plenty of political reading elsewhere. I’d rather deal with the issue. Might the President’s comments affect the Fed’s actions?

CHUCK: I don’t believe they will Dennis… Simply because the Fed Chairman, Jerome Powell, will probably want to hike rates even more now to make certain the markets and media think of the Fed as independent!

Yeah, I don’t like to get into politics either, and prefer to just talk about the investment opportunities that come from political blunders, or policies…

“The economy is run by a conglomerate of individuals and special interests, in and out of government, including the Deep State ….

…. There’s good reason the financial elite hysterically oppose an audit of the Fed.”

In 2016, Congress voted NOT to audit the fed. 53 senators voted in favor of the audit, yet somehow it requires 60 votes to pass.

CHUCK: I truly believe the Fed should be audited. I worked in a bank for many years. We would face multiple audits each year by different regulators, in addition to audits from our internal audit group. These audits give investors a sense of confidence that the entity is stable, has no skeletons in the closet, and will be there when they need to be.

Why wouldn’t the Fed want to be audited? Do they have skeletons in the closet? I’m with both Ron and Rand Paul on this one, Dennis, but that vote from me, and a $5 bill will get you a cup of coffee at Starbucks! Good luck getting it through Congress, you’ll need it!

Dennis here. Deception from corporate America and the Fed is just part of the game. Investors must beware and always do their homework.

Friend Jeff C. encourages me to publish some of our photos. This week I’m sharing a photo taken in Sedona on an iPhone by our dear friend Joan C. 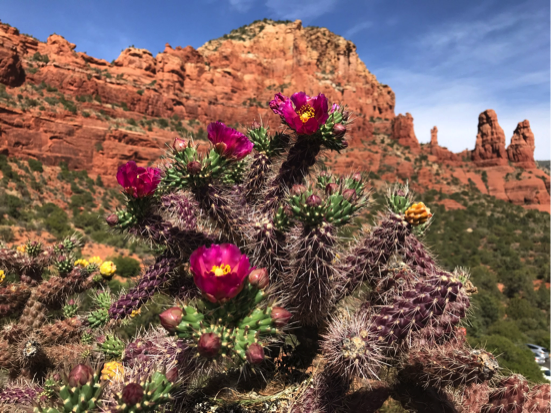 We had it blown up and a copy is hanging in our home. Desert flowers are beautiful!

We might as well find some humor in the Fed and our government debt. 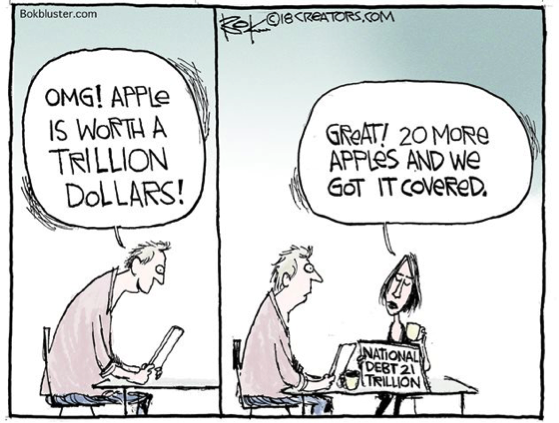