Is The Fed Engineering A Market Crash? 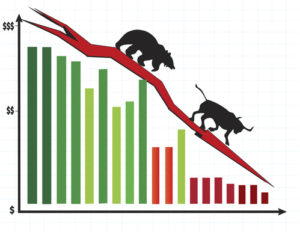 Can the Fed cause a market crash?

“Would I say there will never, ever be another financial crisis? …. That would be going too far but I do think we’re much safer and I hope that it will not be in our lifetimes and I don’t believe it will be.

…. The capital positions of the major banks are very much stronger….”

“Indefinitely is a long time. Not every business cycle is going to last forever, but no reason to believe this cycle can’t go on for quite some time, effectively indefinitely.

We don’t see the kind of buildup in risks in the financial markets, let alone the banking system.”

“Interest rates are still accommodative, but we’re gradually moving to a place where they will be neutral,” he added. “We may go past neutral, but we’re a long way from neutral at this point, probably.” (All emphasis mine)

The Fed bailed out the banks and saved them trillions in interest. Rates were held down for over a decade.

If rates stay low for too long, stimulating the economy, they run the risk of high inflation and financial instability.

When Janet Yellen says we are not likely to experience another financial crisis in our lifetime or Powell says, “…no reason to believe this cycle can’t go on for quite some time, effectively indefinitely” – should we worry? Doggone right we should!

“So, let’s look at the Fed’s track record, shall we? Did you know that in 105 years, the Fed has never accurately forecast a recession?

…. Or that the current running total is nine straight annual economic forecasts that they’ve had monumentally incorrect?”

Fed heads tout a strong banking system and no risks in the market.

“Ten years ago, investors and financial institutions re-learnt…that excess leverage can be dangerous. So, it seemed natural to think that debt would decline…. Not so. …. Overall global debt has surged: last year it was 217% of gross domestic product, nearly 40 percentage points higher – not lower – than 2007.”

What about the “too big to fail” banks?

“The…Lehman bankruptcy made clear the dangers posed by ‘too big to fail’ financial institutions…. Unsurprisingly, there were calls to break them up. The big beasts are even bigger,…. America’s top five banks controlled 47% of banking assets, compared with 44% in 2007, and the top 1% of mutual funds have 45% of assets.”

The Economist offers, “A decade after the crisis, how are the world’s banks doing?”:

“At the time of the election just two of the six biggest banks,…could boast market capitalizations that exceeded the net book value of their assets. Now all but Bank of America and Citigroup are in that happy position.

…. And the biggest question of all has not gone away: are banks – and taxpayers – now safe enough? (Emphasis mine)

Plenty of Americans…are still suspicious of big banks. The crisis left a good number of them (though few bankers) conspicuously poorer….”

Who cares if their market cap exceeds their assets? How does that equate to bank safety? When the credit bubble bursts they will write off billions in bad loans and/or get bailed out once again.

Are you comfortable a major crash won’t trigger another bank bailout at our expense? Count me as a skeptic!

Is the Fed going too fast?

I’m uncomfortable with Chairman Powell’s comment, “We may go past neutral, but we’re a long way from neutral at this point, probably.” (Probably???)

“Stock investors could be in trouble heading into next year as the Federal Reserve continues to tighten monetary policy more than what is called for given the low level of inflation, Stifel’s Barry Bannister writes.

Bannister…said…that two more rate hikes would put the central bank above the so-called neutral rate, which accounts for inflation.

Historically when this has happened, it has triggered a bear market.” 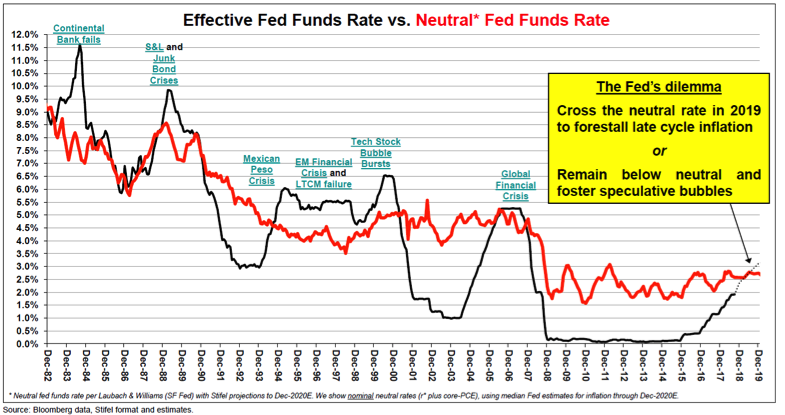 “Timing the next 20 percent bear market is difficult…but ‘within 6-12 months’ seems assured,” (Emphasis mine) wrote Bannister. “History indicates that the next bear market may be quite rapid, probably exceeding the reaction time of the Fed.”

Who do you believe?

If Mr. Bannister is right, a big market correction is coming soon. Mr. Powell and Ms. Yellen tell us happy days can go on indefinitely. Who are you betting on?

Are you confident the market will only drop 20%? The S&P 500 dropped 56.4% last time. Not all market corrections turn into a financial crisis, but the warnings are clear.

“…. On average, JPMorgan analysts say, the three news conferences hosted by Powell to clarify Fed rate-setting meetings have heralded an average 0.44 percentage point drop in the S&P 500…and those losses have totaled some $1.5 trillion so far….”

The losses were temporary as the market rebounded – so far!

If a .44% drop equals $1.5 trillion, would investors lose over $67 trillion in a 20% decline? How much do we have to lose before Yellen calls it a “financial crisis?”

“…. A recent JPM report suggests, that the next financial crash may be so cataclysmic that the Federal Reserve may have to enter the market to buy up stocks….”

In my article, The Fed is Playing, “Pin The Tale On The Elephant”, I raise the question about the Fed (despite many denials) playing politics:

“Jeffrey Gundlach, chief executive officer at DoubleLine Capital, said…he expects the Federal Reserve to begin a campaign…of ‘old school’ sequential interest rate hikes until ‘something breaks,’ such as a U.S. recession.” (Emphasis mine)

“He described rates as still ‘accommodative’,…and said the Fed needs ‘to gradually, very gradually’ (Emphasis mine) move rates back to neutral.”

The Fed is aggressively hiking rates, while unloading trillions in treasuries, driving rates even higher. Does that look like “very gradually” or are they slamming on the breaks while putting the car in reverse?

Radio host, Dr. Dave Janda tells us, “Everybody in Washington knows the next big crash is right around the corner. …. The Federal Reserve is one of the entities that is directly responsible for this financial mess our country is currently in.”

Control what we can – where we invest

Review your holdings and keep your stop losses current and tight.

Is your financial manager telling you to “buy and hold” or reduce your market risk?

Some readers reported tough discussions with their financial managers advising them to stay fully invested. Remember, it’s your money! If your manager is wrong, they lose a client – you lose your money. Do what YOU feel is right.

There is some good news.

The Bureau of Labor Statistics reports, “…. The all items index rose 2.3 percent….”

For the first time in years, some CD’s are paying more than reported inflation.

If you want to safely hold capital, CDs 6 months or longer yield more than current inflation. I’m not going out more than two years. The extra yield is not worth the loss of liquidity and future inflation risk.

While Mr. Bannister predicts a downturn in 6-12 months, no one knows for sure when the correction/crisis will occur. I’m not willing to bet it won’t happen in our lifetime. If/when it finally happens, let those who took reasonable precautions enjoy some real bargains in the market.

One person in South Carolina won the $1.6 billion-dollar lottery. Not only are they lucky they won, they are also fortunate because South Carolina allows the winner to remain anonymous.

I did some research when they changed the Powerball rules. If every adult in the country bought one lottery ticket with a different number, 20% of the lottery numbers would remain unsold! I read that it could easily have rolled over to $2 billion as 25% of the available numbers were not sold.

I can’t imagine what would have happened if it rolled over. What a windfall for the government.

It’s a fantasy dream for participants – for entertainment purposes only.