Is The Travis McGee Retirement Plan A Fantasy In Today’s World? 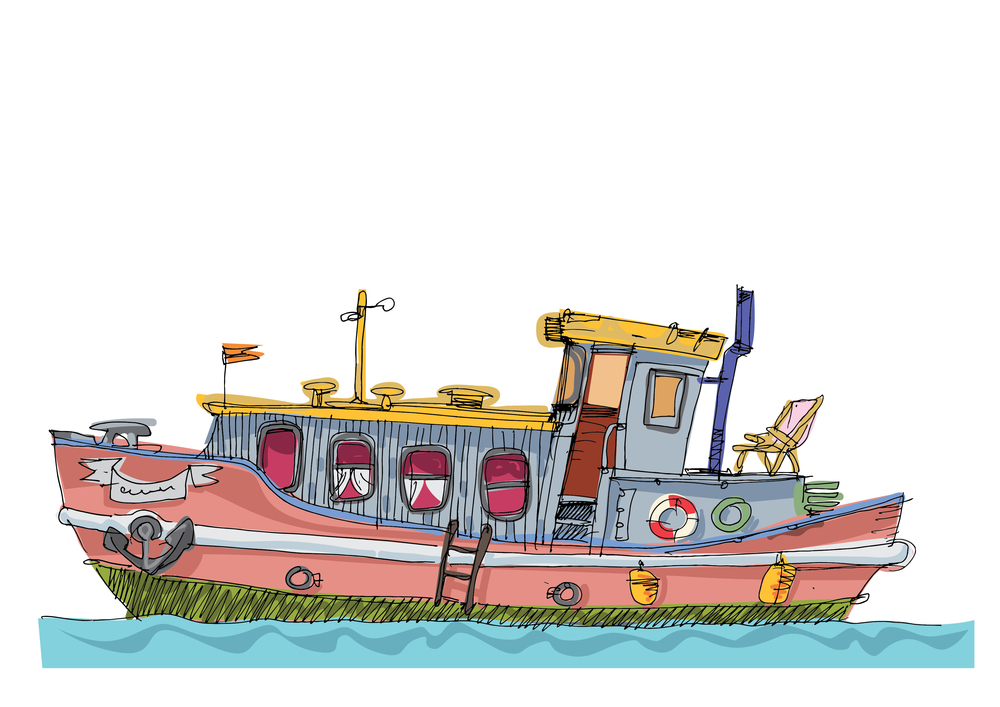 I began daydreaming as she described her financial situation and her dreams. Another free spirit who has worked hard, done well and wants to get out of the rat race.

In my first career, I spent 40+ weeks per year flying all over the world. We had no electronic toys to pass the travel time. We read books, hundreds of them. My fantasy hero was Travis McGee, a character created by author John. D. MacDonald. Clayton Moore describes McGee this way:

“I admit it. I’m on the Travis McGee retirement plan. I read once in a battered pulp paperback about a beach bum who subscribed to his own peculiar philosophy that retirement could be taken not all at the end as an old man but as early and as often as fortune allowed. In short, our days are numbered and not to be wasted battering away at some tedious task for damned fools. It’s not a prosperous life but you get to spend a lot of time in the sun.

…. McGee wasn’t even a proper detective but a self-contained “salvage consultant,” meaning he went after lost property with quick wits and a hard skull and kept whatever he recovered for half its value. Even after one book, though, you realize that he’s far less in the…”bad-guy-as-hero” family as the “tough-guy-with-a-heart-of-gold” range. He likes women, dogs, good gin and has, for the most part, a sound mind and body. No, he doesn’t always fight fair but he does fight for the right reasons.”

Travis McGee earned some money and temporarily retired. When the money started to dwindle, he took on another assignment repeating the process. Each assignment was another book.

“McGee starred in twenty-one novels from the first, The Deep Blue Goodbye, to his poignant final bow in 1984’s The Lonely Silver Rain.

…. Yes, it’s an embodiment of sixties and seventies male fantasy life…. McGee lives on a houseboat (slip F-18 at Bahia Mar in Fort Lauderdale), the famous Busted Flush named after its acquisition in a $30,000 poker game. Equip one anachronistic adventurer with one eloquent best friend in Meyer, a crisp glass of Boodles on ice, a bunch of very human villains and a relentless series of warm and willing female companions, and stir.”

I read one book and was hooked. I bought them all, put them in order and couldn’t put them down. Each week I scoured the airport bookstore searching for more. MacDonald was a prolific author, keeping my fantasy alive for decades.

McGee was single and fancy-free, a fantasy for sure. I was married with three children headed for college. I then divorced and started over financially. I needed to earn a living and save for retirement.

Jo and I married a few years later and I started my own business. Things went well.

We bought a small boat, naming it “New Harmony.” We took New Harmony across the state and docked at Bahia Mar. Late one night, under a full moon, I told Jo I wanted to find boat slip F-18 where Travis McGee lived. I guess I wasn’t the only McGee fan to do so, here is what I found: 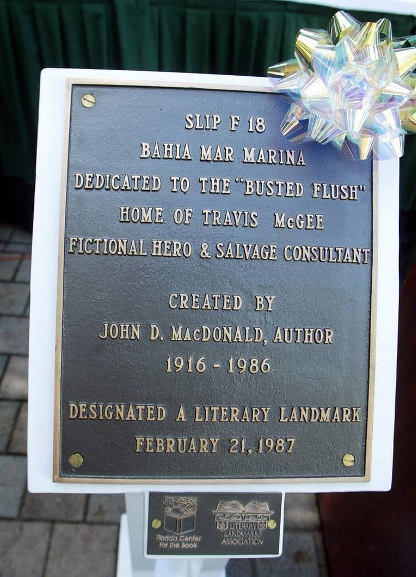 We talked late into the night about McGee and his fantasy lifestyle. I said, “Someday I want to take a long, leisurely vacation and drive across the country”. With our pets, it would be impossible.

When the dog died Jo asked, “If we had a motorhome, could we take the cats and go on your dream vacation?” I got excited! I started to research.

Ironically the first book I read was, First We Quit Our Jobs. Amazon’s description:

“After fifty-two combined years in the corporate fast lane, Marilyn Abraham and her husband, Sandy MacGregor, embarked on an adventure that every work-driven professional dreams about but hardly ever has the courage to realize. They quit their jobs and hit the road in order to retrain themselves in the art of living. For almost a year, the couple traveled nearly 20,000 miles to thirty-one states,…in the hulking RV they named Sue.

More than just a travelogue, First We Quit Our Jobs is the story of recreating one’s life and discovering what is real, what is true, and what is important. (Emphasis mine) Filled with visions of Americana, this personal and touching memoir traces the author’s search for meaning in this modern day.”

I was approaching 60, am I too old to let my “free spirit” out for a spin around the country? What about saving for retirement?

I didn’t quit my job. I could rearrange my assignments to create longer periods of free time. I hired someone to take some of my workload. We bought a 40-foot motor home and off we went. For three months, we drove across the country and wanted to do it again – and again. 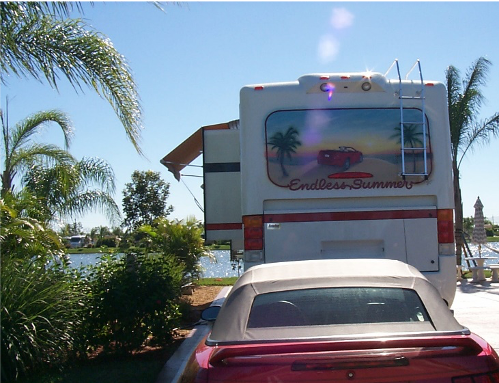 After a few years, we took the plunge. We sold our home (furnished), put our remaining personal belongings in storage, bought a larger bus and committed to “full-time” it. We named it “Endless Summer.” When I worked, Jo would take me to the nearest airport and off I went. What a magical time it was, the bus was home, our schedule was our own.

We met some wonderful people during our travels. It made no difference if they were in a pop-up camper or a million-dollar bus, they were down to earth, fun-loving real people. Each winter was spent in Marco Island, FL.

While we loved the free and easy lifestyle, the gnawing feeling to establish roots eventually came back. We bought a home in Tampa, sold the bus and never looked back.

My unsolicited advice for S. D.

I understand your feelings. Follow your dreams – intelligently! You were right in asking for professional advice.

…. Of course, even though the math works, life might not work out quite as well – and you could need more…to live on, especially if you have a major expense that hurts your bottom line.

…. You should think about these, and other, questions when determining whether you can really live the life you are hoping to. Is there anyone you might need to support? How will you afford things like a long-term-care event, health insurance or medical issues?”

S.D., I am not a CFP, let the pros run the theoretical numbers. I am soon to be 80 and have many friends who have transitioned out of the work force into retirement.

I will start with our own experience. The professionals said we built a bullet-proof retirement plan. We could live a comfortable lifestyle and never have to worry about money.

Then 2008 happened. Interest rates dropped to historic lows and will likely stay there. The low rates caused us to take a 66% income cut. Friends, heavily invested in the stock market saw their life savings drop by 40-50%.

Heed the warnings, stuff will happen. In your lifetime, it’s likely the government will means test social security. With your wealth, you will be a target.

Our “free spirit” friends are all over the map.

We have world traveler friends enjoying life to the fullest. They are generally very wealthy. Today, $1 million invested in a ten-year certificate of deposit earns just over $10,000 in interest annually. Couple that with social security and you won’t do much globetrotting.

We have other friends who are still working in their late 70’s, it keeps them in the game and they seem to enjoy life. Keep your working options open, maybe an encore career; you will never regret it.

Sad to say, The Miami Herald tells us, Travis McGee and his Busted Flush evicted from Fort Lauderdale marina:

“The Busted Flush has gone bust. The bronze plaque commemorating Fort Lauderdale’s most famous resident, however fictional, no longer marks Slip F18 where Travis McGee once moored the city’s most famous vessel….

Archaeologists need not bother digging around the Bahia Mar. MacDonald and McGee have slipped away from Slip F18.

One thing is for sure, Travis McGee would never have been able to afford to dock there.”(Emphasis mine)

The McGee retirement plan isn’t fantasy. Friend and fellow cancer patient, Chuck Butler says, “Health is wealth … if you have health you are wealthy and if you don’t have health… the costs of keeping you going will eat away your wealth…” The fantasy is not realizing, eventually McGee will get old and need to survive – without working.

Keep your reserves at all cost, even if it means having to work a little longer. You can still live your dream and enjoy life to the fullest as long as your health allows. Keep on keeping on!

Last weekend the family began to arrive, children, grandchildren and great-grandchildren. The Coronavirus panic is so out of proportion it is pathetic. How does that lead to a toilet paper crisis? The shelves of the grocery store are out of food. Having an additional eleven people around, four generations of family for the better part of a week is a blast….and should not be clouded by worrying about toilet paper! Enough, you don’t want to hear me rant…

Looking at the positive side; with all the sporting events cancelled, and not wanting to watch the political hysteria 24-7, gives rise to actually talking and having fun with your family.

We had nice rains before the family got here and the desert flowers were in full bloom. This is a pretty time of the year to be in the AZ desert.

Of course, the internet was full of toilet paper humor. Here are a few I thought were cute.